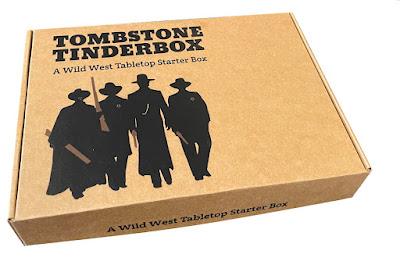 Some months ago I bought this starter set from Little Wars TV, I had been playing some Old West games with my friend P-Y in a playtest of a soon hoped to be published new TFL ruleset. P-Y has a complete set up in 28mm with beautiful figures and some great terrain. We played quite a few games and we are just waiting now for the playtest to be complete and see the final version of the rules. I really have no intention of duplicating P-Y's efforts, I just have no more room here to expand into a different era especially in 28mm. Remember, I sold over three thousand 28mm Napoleonics to get a 15mm Napoleonic army which took up a lot less space.
But I have to say I was intrigued by everything being in one small box and I really believe Little Wars TV has done an enormous amount for wargaming in the US. I wanted to support their efforts. It was quite impressive what is in the box. 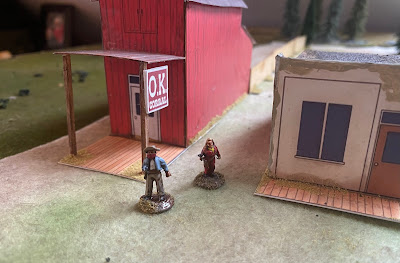 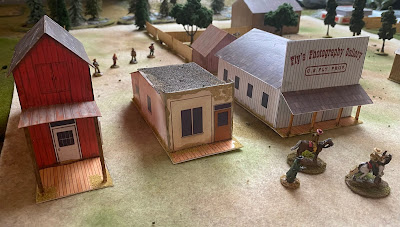 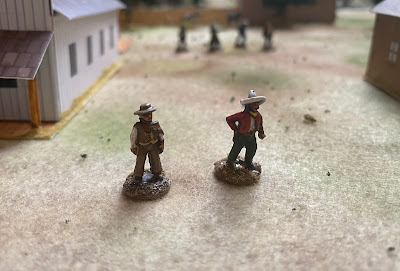 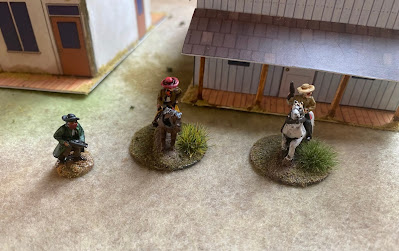 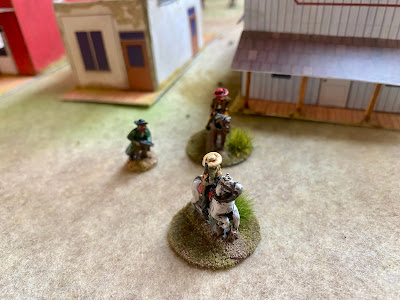 Also included is a set of rules, dice, playing cards and a Tombstone campaign. The campaign is 3 tables and tracks the events of shootout between the Earps and the Clantons at the OK Coral and the subsequent chase through the Wild West. It looks like fun.
The 15mm figures are from Old Glory and I believe they represent various historical and fictional characters from Old West. I am not sure who is who, but I do recognise the "Man with No Name". The figures are nice enough and the cardboard buildings are sort of interesting. Would it be the path I would take, probably not......but I have to say it was a lot of fun putting it together and if I ever wanted to play a small game of "What a Cowboy", I could!
Posted by john de terre neuve at 13:44