The Battle of Waterloo 200 years today! 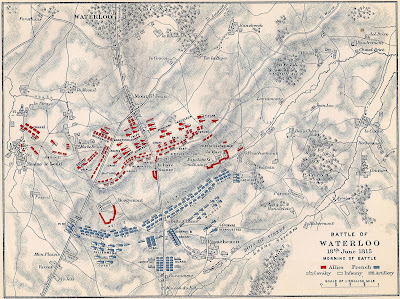 Well I did not get to play in any Waterloo commemoration mega games, I am quite jealous of you who have. To live in the Antipodes!

I had to do something to celebrate so I pulled out all my Napoleonics and laid them on a table. Although I am not certain, I think I started painting sometime in 2005-6. The lead pile has considerably reduced, really very few and French and British lying around now. Still quite a few Prussians and a brigade of Dutch-Belgians. I also think there are 2-3 battalions of Austrians and of Portuguese. Could be much worse!

But the big question is how many? Take a guess the answer is below.
Well that is it all 2712 of them. I thought it a little more but of course there is still the pile! 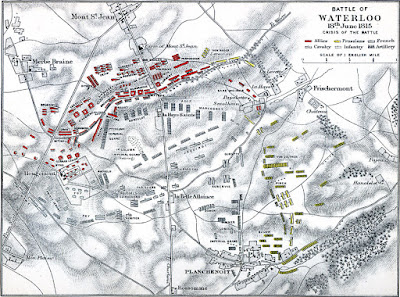 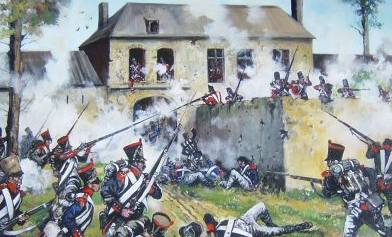 This Saturday, I reset up the Hougoumont Scenario that the Boston Trained Bands put on at Huzzah three weeks ago. I did not get a chance to play then so was quite keen to have a go. The club uses the Black Powder rules for Napoleonic wargaming. Not my favourite set, but certainly a good set for an asymmetric scenario like Hougoumont. Few rules sets allow for 4 different sized units, but to recreate this battle with multiple single companies coming on at different times, I have to say they worked very well. One other thing I like about BP is that the movement rules are quite simple. I less like the fact that the combat and firing mechanisms are not related to the number of bases but rather to several (4) intrinsic stats for each unit. I have to admit I also like stand removal. But I should not be too critical, as I have to say I really had an enjoyable game.

We played the scenario as written in the Albion Triumphant (a title which drives my French friends crazy) supplement, with one minor change. The scenario only allows one tiny unit within the wall of the chateau complex. The footprint of the model we used was much larger than described in the supplement, so we allowed 2 units in the chateau and two in the walled formal garden. It was a 12 turn game with a French brigade (21 battalions in total) coming on in turns 1, 3, 4 and 6 while the Allies had the equivalent of around 3 1/2 battalions dribbled in over the same period. The French arrive anywhere on the southern edge while the Allied companies arrive in either the compound, the garden, the orchard or the kitchen garden. The Allies have one advantage and it is significant, the British Guards make up 2/3 of this force. They are fearsome! The Allies also have 2 small brigades as reinforcements in Turn 10. There are also off table artillery firing each turn, 5 for the French and 2-6 for the British. No cavalry in the game.

Four of us played, Rich and Steve split command of the Allies, while myself and Bill had 2 french Brigades each. Aside from myself all well well acquainted with the rules. The French have the first move. 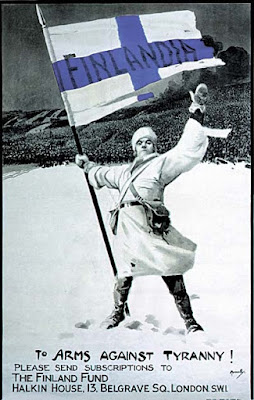 Last Saturday, I finally got another Winter War game played. Readers of my blog will know that I had some difficulty with the structure of the campaign related to the perceived playability of the Soviets. According to the CoC army lists in January 1940 the Soviets should be rated as green with 4 Command Dice in the Finland. My opponent found this a boring game and I could only agree, after a lot of discussion on the TFL forum it was felt best to increase the CD to 5 while keeping the force green. By then however interest had faded and the campaign went on a hiatus.

Fortunately for me, I met an experienced CoC player at Huzzah (he was actually demonstrating CoC for Eureka Miniatures, the new TFL representative in the US). Mike P was quite interested in playing and actually drove all the way from RI to Malden to have a game.

I decided to go with the last scenario in the campaign, because I wanted to see my NKVD troops in action. The scenario is as below and is pretty straight forward. I gave the Finns two extra support choices as I had increased the Soviets CD to 5. This is all laid out in the CoCulator. I did not adjust for the NKVD being regular, as I had kept the tactical Finn supports as Eite. There is a bit of debate about this on the TFL forum.

Well we had a great game, Mike is quite an engaging fellow and very pleasant opponent. The game was enormous fun, see-sawing back and forth, I thought I had it in the bag several times. Notwithstanding the Command Dice favouring me in mid game (I had 4-5 double and triple 6's), I eventually lost on morale failure. Mike played a great game digging in his Soviets and bringing out well chosen supports at the right time. Anyway on to some snaps.

Well it was really a lot of fun and more importantly with some minor adjustments, it showed me that a Winter War campaign can give an entertaining game to both sides. But of course, the best thing is that I have met another local (relatively) CoC player.
Posted by john de terre neuve at 11:01 10 comments