Myself and Mike had our 3rd game in 4 weeks of CoC. Like our last game, we set up the terrain and then diced for the scenario. Scenario 4 came up this time: A Delaying Action. We then diced for sides, I won and picked a British Infantry Platoon, Mike took the German Grenadiers. Diced again for Attacker/Defender, I won and chose to be the attacker. We then diced for Morale, I ended up with 9 and Mike 10. Finally we diced for supports, I rolled a 7, Mike as the defender got half a 3. Our supports were blinded, but I picked a Paratroop section (6) and 1 entrenchment (1). I know Mike picked a 5cm mortar (2), I am not sure what his choice was from list 1.

So the game started with the patrol phase, I think Mike got the better of me here. I was hoping to advance my markers on my left flank. The scenario runs the long edge of the terrain. My set up was in the far ground of the below photo and Mikes was in the foreground. Mike had 3 patrol markers all placed outside of 6" of his short edge of the table, and placed with 6" of each other as his starting position. I placed 4 patrol markers on one spot on my short edge ( I selected the dead centre). My objective in the game was to capture the German JOP marked with the red x in the photo and hold it until turn end. I will now let the photos do the talking.

Myself and Mike had a quick game of CoC at the Hobby Bunker today. I got Mike to set up the terrain and we then diced for the scenario. Scenario #3 came up. We then subsequently diced for choice of platoon, Attacker/Defender choice, Morale and finally support. Mike won the first two and selected a Canadian Infantry platoon, I picked the Germans, he also selected to be the defender. We then dice for morale, I ended up with 8 and Mike ended up with 11! Finally since I was the Attacker, I threw 2D6 for support and got a six. So I ended up with 6 supports and Mike 3.

Basically I had to push the Canadians into a retreat, or defeat them by morale. I could not drop below a morale of 4 or I was done. On to the patrol phase. 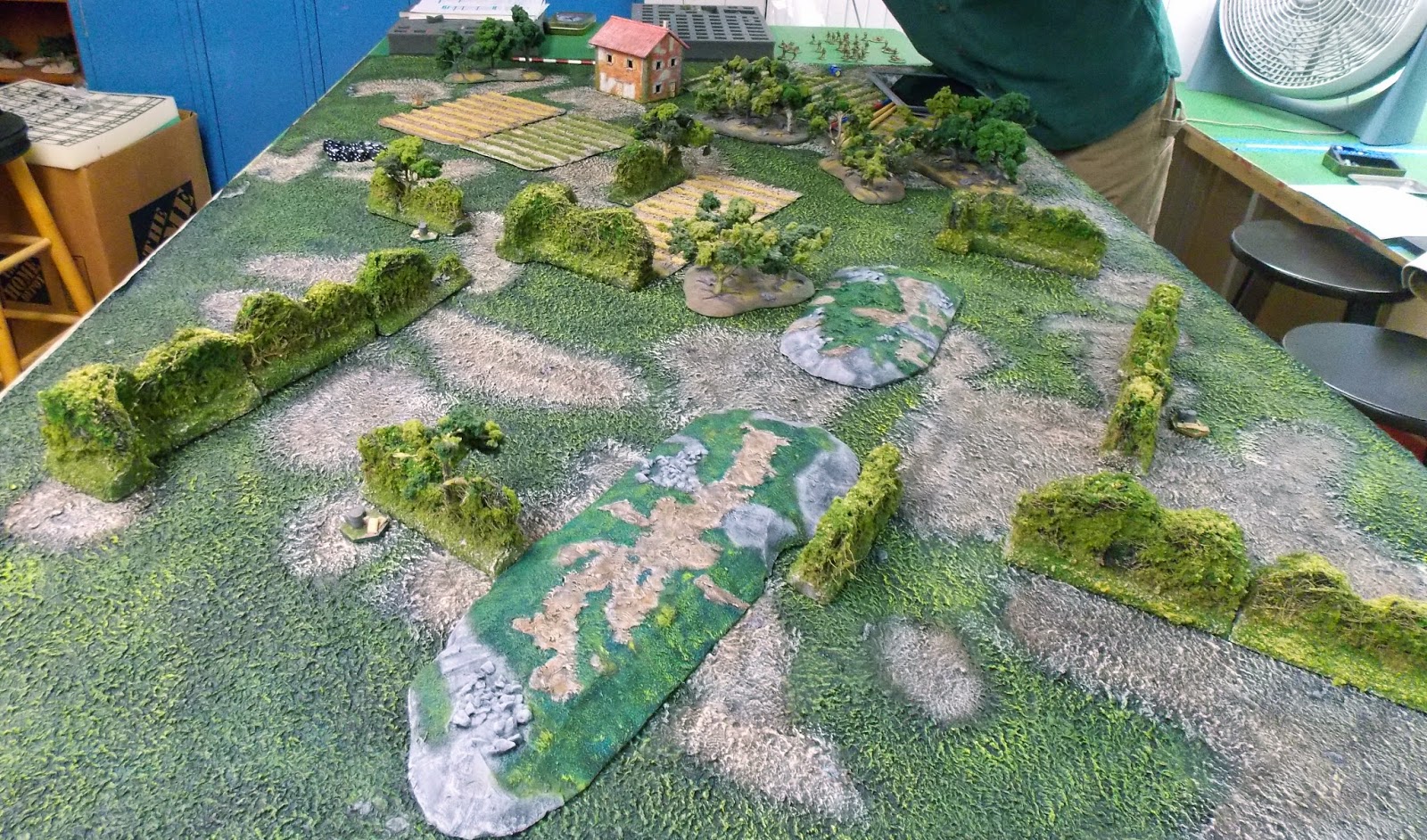 With the publication of Big Chain of Command, I thought I would get my allied armour in order. This update allows the addition of extra infantry and armoured platoons while using the same basic mechanic as the platoon based game. It is pretty simple and really just delineates some changes in the terrain size, how the patrol phase and order of play is modified. There is also some modification to the morale table. With my 20mm army I, think I will be fine with the addition of an armoured platoon or infantry platoon in respect to my 6x4' playing surface.

For my initial forces, I bought several boxes of PSC AFV's but generally painted just one vehicle or tank from each box. The update for CoC also gives an outline of basic platoon structure for several nations, so I thought I would start going through what I had and get the glue out. The recent addition of an Iwata airbrush that actually works made things easy.

First up I thought I would do the British/Canadian platoons. These were my weakest forces in respect to armour, and were far out done by the Soviets and the Germans. I had a box of 76mm Shermans as well as some Universal Carriers and had just bought a box of Churchills.

So it is going to be very tempting to bring these 2 platoons up to strength. I think PSC sells sprues which would be good as I need only one Churchill and one Firefly. I suspect I will add a platoon of anti-tank vehicles, those Achilles from Armourfast look very nice. But next up I hope to post my Soviet armour, of which I have quite a lot.