The 2ème was the largest French regiment at the Battle of Waterloo and comprised 4 battalions of 2294 men and officers. This unit and the 1ème légère made up Bauduin's brigade in Prince Jérome Bonaparte's 6th division. As we all know by now, Bauduin's brigade was the initial unit sent to attack Hougoumont. I know little of their history, their only battle honour was Friedland.
This is one of the biggest single unit painting projects that I have taken on. I only had 6 of these figures on hand when I started, and my plan required 96 figures. I have been at it, off and on for about 6 weeks. I actually timed myself and it took a little over 15 minutes to paint each figure. Each battalion is comprised of 24 figures and aside from the 1e battalion are based in close order. The 1e battalion is in skirmish order as an adjunct to the planned Hougoumont scenario. The units are based for Lasalle, but as the figure ratio is approximately 1:20, I can also use the unit for Republic to Empire.
Aside from 6 of the Voltiguers in the 1e battalion, one of the engineers and the Colonel de Régiment ( Victrix) and 1 officer (Elite) all the figures are from Perry. I decided to go with just the elites from the plastic boxes as I like the look of epaulettes. I read somewhere recently that the men in the légère battalions when getting their new uniforms, ripped the epaulettes off their old uniforms and attached them to their new ones. The regimental stand is from the Perry metal range.
I tried to be correct in my painting and aside from the drummers (should have green coatees), I believe I have been fairly accurate. Usual white base coat, with GW blue ink for the basic uniform, GW midnight Blue for the officer's uniforms and GW Fenris Grey for the overcoats. I used the AP black pigment polyurethane, applied very sparingly followed by Dullcote Matt spray.
The 4 battalions in line.

Colonel Maigros and the regimental colours 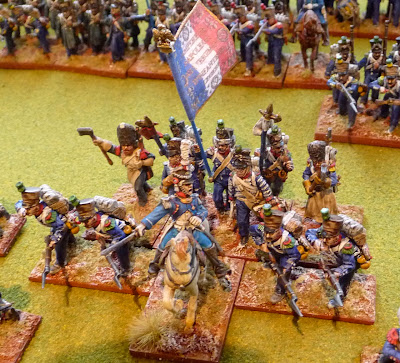 Regimental square, if there is such a thing 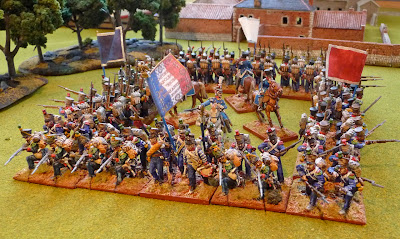 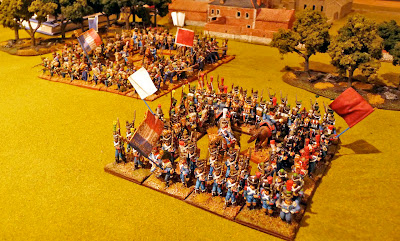 It has been a while since I posted, but I have been quite busy with my Hougoumont project. All the buildings and figures have been bought and are in the process of being painted. I thought I would post a few snaps of my progress.
Still playing with the OB, certainly on the French side, I will have the 6th Infantry Division (7900 men) under Prince Jerome, this is pretty well completed except for the 4e régiment de lègére, whose bases need to be terrained. I suspect, I will also use Jamin's brigade in the Foy's 9th Infantry Division (2700 men). I have these painted except the 2/4e lègére and I will have to substitute régiments étrangers (1e bat, la légion hanoverienne)  for the 3/4e. Getting a little tired of painting blue. No cavalry or artillery will be used for my first go. These will be all 24 figure units (4 base), although one of the french lègére battalions will be based in skirmish order.
The Allied forces are pretty well done, aside from the 1/2 Nassau. There will be 2 battalions of British guards (2000 men) and 1 battalion of Nassau (1000 men), these will be 34-36 figures in size. There will also be Hanoverian Light (Lueneberg) and some Kielmansegge's Jagers in skirmish order (400 men).
So 10,600 versus 3400, should be fun. Still planning to use Lasalle rules for the first run through, but also looking at the Republic to Empire rules for a second run through. With this much work, I will be doing I suspect, endless variations of the scenario with La Haie Sainte thrown in for future fun. I find the RtE rules a little tedious, but I really like the approach to skirmishers and BUA. I suspect they are the best rules to run an asymmetric battle.
Here we have the half painted Hougoumont, I decided to shorten the eastern wall. Still a bit of terraining to do, but minor stuff with the orchard and the ground within the compound. 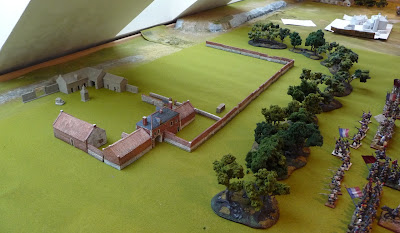 Here are the 6th Division, minus 2 bases of the 4/2e. Their fannion is waiting to be picked up. The 1/2e are in skirmish order. 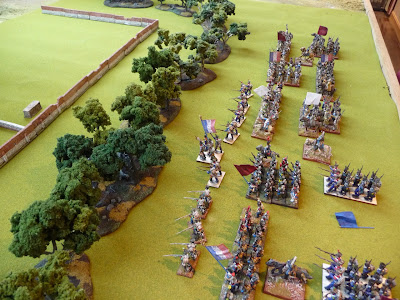 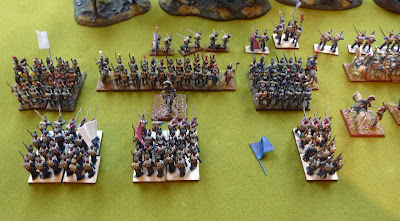 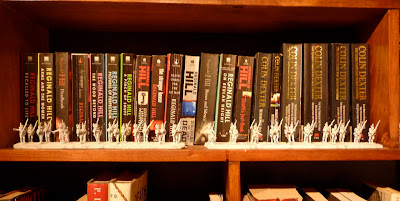 Still have 8 infantry colonels to paint! 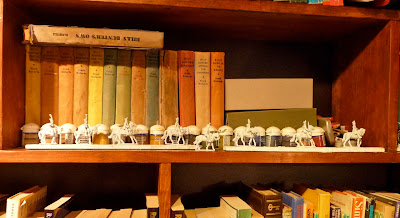 Here we have the missing figures from the 4/2e waiting for their Army Painter as well as the great barn. 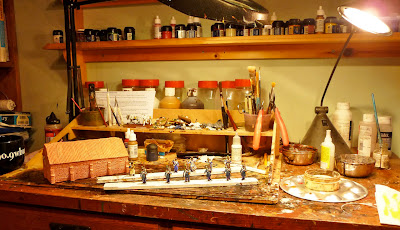 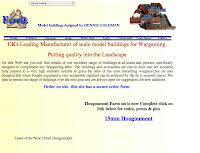 Second in my "plug" blogposts is my latest acquisition from Hovels in the UK. My latest project is a combined Hougoumont/La Haie Sainte scenario and for this I needed Hougoumont. I ordered it Nov 1 and received it by Airpost on November 8, 2010, which is quite good service. From the postage stamp, I could see it was sent the day after I ordered it. I had been emailing back and forth with Carol at Hovels about some details in respect to size and she was quite prompt and helpful in her responses. I do wish they had more details about size on their website, but Carol was quite helpful in providing the information. As you can see each piece comes packaged in their own little labelled bag. I have done some rooting here, but I can say that the pieces were well and safely packed. All pieces ordered were there. I had ordered extra to make up for the long wall running to the east which enclosed the orchard. 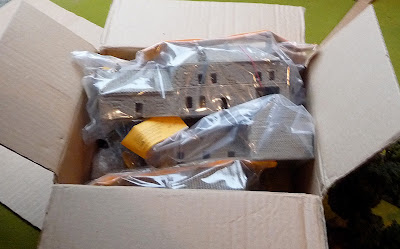 As you can see it all fits together nicely. The vertical scale is quite off, but really I think it will work nicely for my game. As you can see the model is quite detailed, there is hardly any flash, and is paintable from the box.

Time to get painting. I will use a white prime, followed by a Citadel Dwarf Flesh medium wash over the brick parts, and GW Fenris Grey medium wash over the non brick roofs, pick out the details around windows and doors using a light grey. The bases of the walls will be painted green to match the terrain. The whole complex will then get an application of the the black pigment (Darktone) AP. I am hoping it will not take too long. Colour scheme is as below (from Hovels site)