The minute I saw these figures two weekends ago in the GW store in Montreal, I knew that I had to have them. They are just really cool. Painting them was great because I could see immediately how I wanted to do it. No googling away this time. Here we have 12 dynamic poses of heavily armoured dwarves. It took a bit of time assembling them, but all in all they went together easily. They were primed white, I know this sounds strange, but the car primer I use, has really a great bite. They were then airbrushed with the old GW Boltgun Metal. I then heavily washed them with a really oldie Citadel Tin Bitz. A very new paint Citadel Dry Necron Compound was brushed on. The beards and the clothing was then painted and AP Dark Tone was sparingly applied. I then touched up only the beards and the clothes with AP brush on Antishine, leaving a lot of the metal shiny. I really like how they came out. 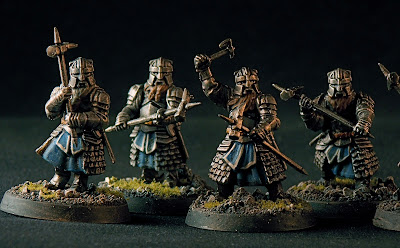 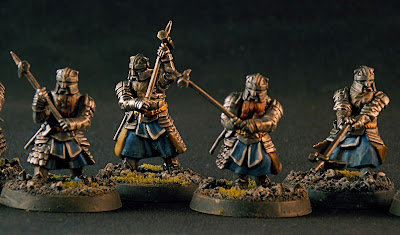 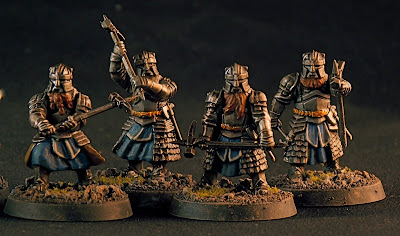 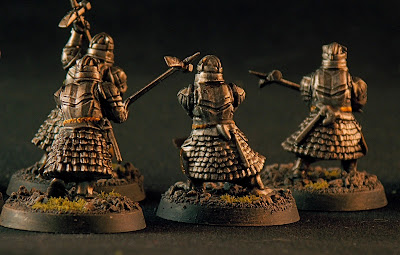 These were my 13th submission to the Painting Challenge, and I am finally all caught up. I have just finished a unit of Brunswick Lights and have almost completed my Andalusian Warband for SAGA, so I believe I will make my quota. 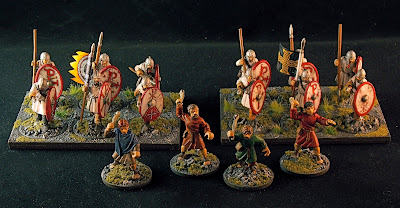 I am now more then half way though my Romano-British force for Dux Britanniarum. Just three units of Numeri left to do. Here we have the 2 units of 6 figures each of the Milites as well as 4 Skirmishers with slings. All Gripping Beast figures. Each unit of Milites has a banner from LBMS, as are the shield transfers. As the Milites are regular infantry so unlike levy I wanted to keep them uniform, but with less detailed clothing then the 1 elite unit of Comanipulares. I thought white looked best. White base, AP Dark Tone, then a dry brush of GW Dry Praxeti White. As they can form into a shield wall movement trays were also painted. I have to say that I am really pleased with how these came out. 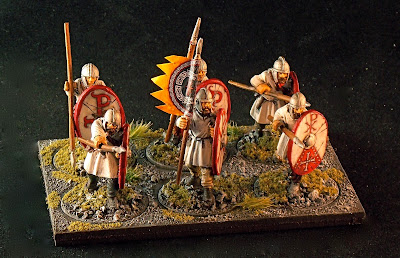 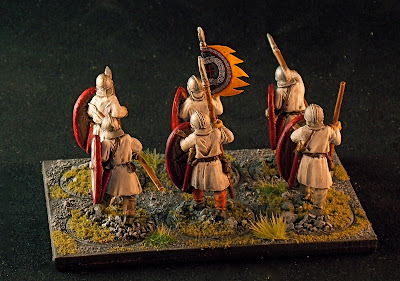 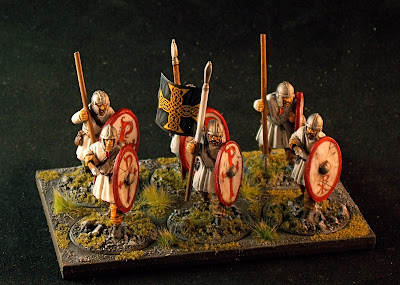 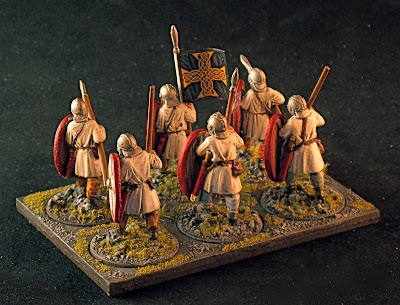 Clever Boy Prizes and the Price of Admission 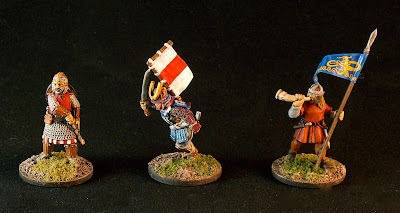 Some Anhalt-Dessauers and the Painting Challenge Progress

I am slowly catching up on documenting my submissions to the Painting Challenge at Analogue Hobbies. These figures were part of submission #8, my Harad were disqualified due to my misreading of the rules.

A set of figures that have been lying around were 12 Perry French plastics painted as a battalion of infantry from Anhalt-Dessau. These will join my Confederation of the Rhine OB. When I first started to paint Napoleonics, I had 12 figure battalions and this battalion was the last unit left over in the transition to 24 figure units. So here we have also 12 figures newly painted to bring the Anhalt-Dessau up to scratch. The new bases are the ones on each end and the pink used was the infamous GW Tentacle Pink long ago obtained from Curt. None matches it. The bases and the facing were all re-done on the old figures.

I would like to do more Confederation units, but really have too great a back log of figures and plans already. I am sure they will see action though. 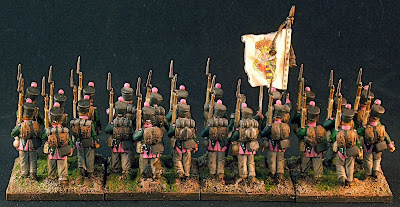 Painting Challenge Update:
Well we are more then 2/3 way through for the Winter Painting Challenge at Analogue Hobbies. Amazingly enough I am still at  6th position of the 47th Ronin, but the leader still has twice the points that I have. So lets see where I am.
9 Dux Saxons (45pts)
6 Brunswick Artillery (150pts)
16 Brunswick Cavalry (160pts)
5 Brunswick Command (50pts)
10 Brunswick Avantguard (50pts)
16 Skraelings (80pts)
44 Dux Britons (220pts) 150 points done
Cunning Secret Project #1 (340 pts) 200 points done
SAGA Secret Project #2 (300pts) revealed to be an Andalusia
48 Brunswick Lights (240pts)
12 Anhalt Infantry (60pts)
Various other Napoleonics to get to 1700 points. not needed

Well with 27 days to go, I think I am on track. I have a 1106 points documented of my planned 1700, with 60 in the pipeline. I have made a good start on my Andalusian SAGA warband. So with the 18 Roman-British, 16 figures from the Hobbit and 2 battalions of Brunswickers, that should bring me over the 1700 mark.

Good luck to all the other Ronin, certainly quite a few have increased their goals. A special encouragement to my gaming friends, Iannick and Nicolas, to soldier on to meet their goals.

Labels: Confederation of the Rhine, Figures, The Painting Challenge

Well here is the first of my 3 planned submissions of my Cunning Plan: GW Figures from the Hobbit.  Here we have 39 goblins. Why cunning you ask, well I thought that I could throw these together at a rate of less then 10 minutes a figure. So 195 points in 6 hours, I thought that was clever. This was my 11th submission to the challenge.
Read more »
Posted by john de terre neuve at 08:12 10 comments

Here are the command stands for my Brunswick Corps with a couple of new basing ideas. First up is the my new divisional stand: A 80x50mm oval. I realized the number of figures I would need for my Napoleonic command stands was just too many, and I also felt the 120x80 mm stands were too big for this level of command. I will stay with this rectangular stand for the Corps and Army command bases ie commands of 12-20k men. For under 12k men, ie. 2-4 brigades, I thought this oval stand looked a lot better and was more appropriate in size for the table. There is also a 50 mm round brigade stand in this collection as well as another new addition, an ADC stand. These 50x25mm ovals will be used for my functional ADC's, ie chaps who have to move about the terrain. FoG Napoleonic ruleset has this as a function and Curt's upcoming ruleset Food for Powder uses them as well. I have always thought that having ADC's running about the terrain would be cool.
Read more »
Posted by john de terre neuve at 09:57 14 comments 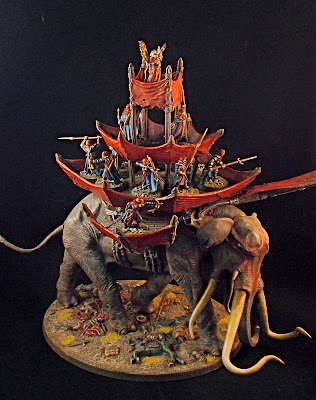 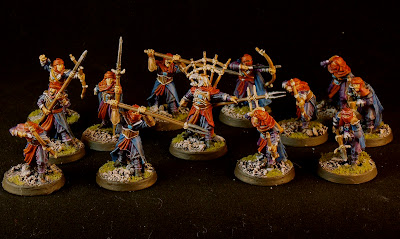 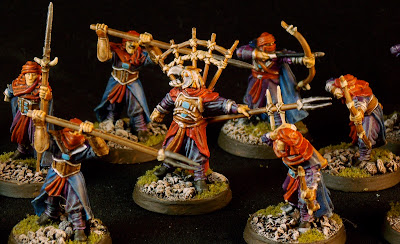 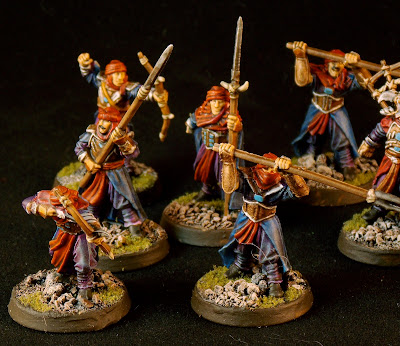 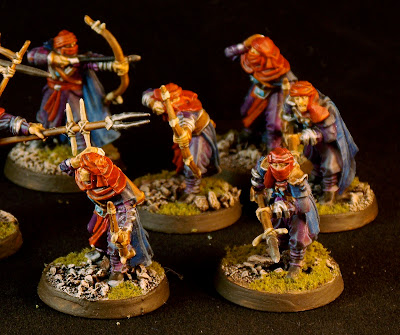 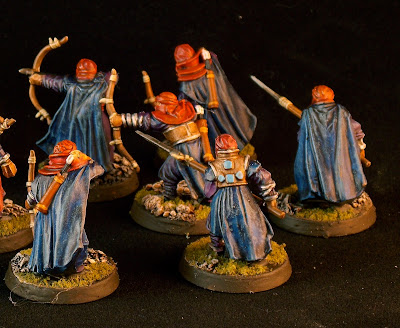 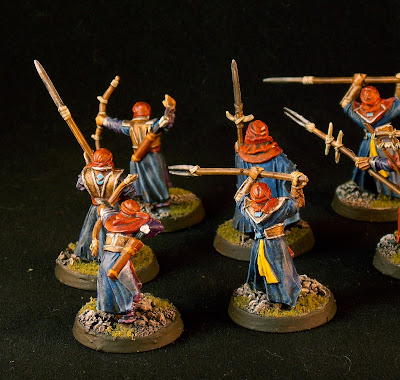 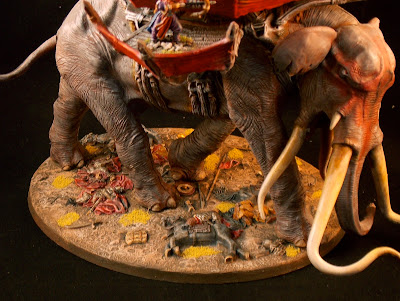 There has been a bit of a delay in posting photos, as my camera broke. But a new one has been obtained, so onward with the photos. These were part of my 7th submission to the Painting Challenge.