A Fit of Madness

Where are the Austrians.............where are the Prussians? Well I got waylaid. You may have noticed that that in my most recent post, I described the Austrian units as being 24-36 figures. Followers of Wargaming in 28mm will know that my standard unit is 12 figures (4 bases), with some adjustment for historical OB. Well if you go back to my very early posts (the second I believe), my initial basing plan was one which would allow me double the size of my units at some unspecified future time. Well that time has come, thus the delay in my painting all those new armies.
Why now you ask? Well there is a number of reasons, I have painted around 35 battalions of French and a similar number of Anglo-Portuguese for my peninsular campaigns. I realised that I really did not need this many units to play most scenarios at the battalion level. The rules I play, FoB and Lasalle both are base dependent sets, while RtoE is more figure dependent. I like all 3 sets and I suspect that I will continue to play all 3 depending on the occasion. I also was growing more and more enamoured of the large battalions. Fortunately, it was quite easy to convert the smaller battalions to the large battalions by the use of magnetised sabots. This of course allows me to go back to my earlier scheme if I want to play a game of Lasalle or FoB involving many more troops as I plan to keep the excess command stands ready.
My next decision was to decide on how many bases should make up each battalion. I like to generally keep with historical OB's, but at the same time I have told myself to be a little less obsessive about this. Many rulesets require specific base sizes, etc, etc ..........these are just stupid and reading TMP is always good for a laugh when they all go on out base size this and base size that.......What I like about Lasalle and FoB, is that there is no required base size and both of them allow to some extent for a variable number of bases. Their only requirement is that the same basing be used for each army; who can complain about that. RtoE is also base size independent, but is interestingly enough also is base independent, but unlike Lasalle and FoB is figure dependent. You need a minimum of 20 figures for small battalions and up to 52 figures for very large battalions (generally recommended a 1:20 figure ratio).
So taking all this into account (as well as the fact that I am painting multiple armies) and after much thought, I decided to go with 3 different battalion compositions generally based on their individual historical OB. All my battalions will be comprised of 4, 5 or 6 bases. This allows for some of the small British units in the Peninsula and small French units in the 100 days, as well as the large British Guard units as well as those immense Austrian battalions. I probably should have 8 bases for the Austrian 1000+men battalions, but I believe both Lasalle and FoB rulesets will break down if units with this many bases are fielded. I suppose I just could have gone with 4 or 6 bases units, but there are those in between sized battalions (700men) that are just not small or large. So the scheme is generally as follows:
I believe this will end up as a generally a 1:25 figure ratio. The great majority of the 40x40mm bases will have 6 figures (made up of 2x40x20mm bases with 3 figures) in 2 ranks, but some 40mm square bases will have a 3 figure British command unit and some of the 20x40mm bases will have 2 elite figures (light) to allow them to break off to skirmish (a neat thing about the RtoE rules). My original 3 figure bases easily allowed all this to happen.
I ended up with 12 French battalions with no work aside from sticking a flexible metal strip to the original base. These are mostly 24 figure 4 base units, aside the 9th legére that made it up to 5 bases. I can squeeze I believe 1-2 more units from my existing battalions, but I have to do a little bit of extra repainting. I will keep all the command stands intact, so I can easily change the unit designation depending on the historical OB. There are also a few extra bases which can act as the nidus of new battalions. Very easy the French. 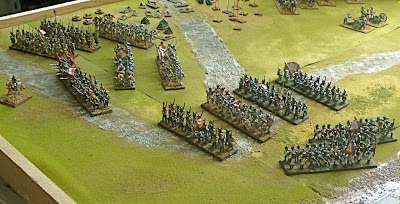 The British were a bit more of a challenge and as you can see below it is a work in progress, figures had to be moved about, facings had to be repainted and there is some reterraining of bases to do. I am also doing some re-flaging, as unfortunately many of my GMB flags faded (they were purchased in 2008, the year of the great fade); Grahame Black has been very decent about this and has offered to replace gratis the faded flags. 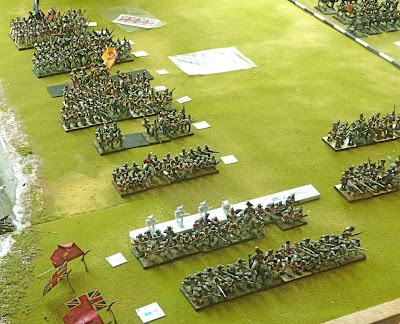 As you can see, I have ended up with 14 British battalions varying from 4-6 bases. I have to do a little extra painting as well (maybe a total of 25 figures). This was somewhat of a challenge as I am a much better painter now than I was 3 years ago when some of these units were painted. It is well worth it though as now my British battalions will finally fly both the King's and their regimental colours. 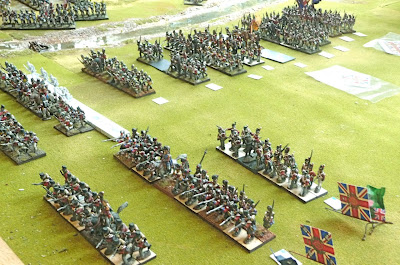 Unfortunately, the 5oth, 43rd, 83rd, 45th, 74th and 42nd have all lost their commands, they do look a little lonely below. I have assured the colonels of the 42nd and the 43rd (need more elite units) that they will be back in service by the end of the year. 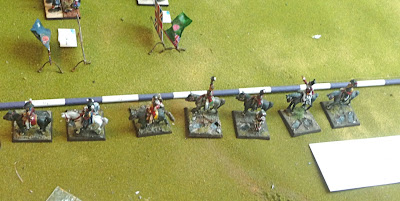 I also have changed my cavalry units bases from 40x40 to 40x50mm. I have quite a few cavalry and did not want to rebase them, I glued a 0.8 mm Litko base to the existing base and did a little terrain fix-up. As you can see they came out quite well. 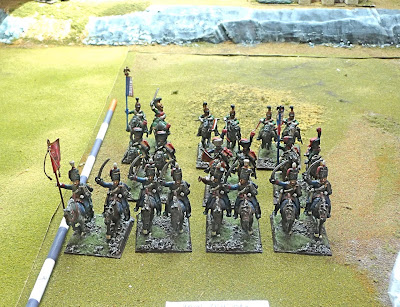 Well maybe it will be the Austrians: Austrian OOB

As a followup to my Prussian OOB post, I thought I would post my planned OOB for my first Austrian division. I plan to work on the Austrian and Prussian divisions simultaneously; white-blue, white-blue.......I am sure you get the idea. Change from red-blue, red-blue anyway!

As previously noted I like to use historical OOB, while at the same time grafting them on to the Lassalle Army Builder. After a look through and a think, I decided to go with an Austrian Avant-Garde division as my core Lasalle unit with an organic choice being a Landwehr unit. This gives me an excellent cross-sampling of Austrian unit types.

After a lot of looking, I have decided to use FML Nordmann's Avantgarde as it was on July 6th, 1809 at the Battle of Wagram.

I wanted an Hungarian infantry unit to paint, so I substituted IR35 for IR49, otherwise Light Bde Froehlich and Infantry Bde Meyer are intact. I then took Light Bde Vecsey and made some changes, an Uhlan cavalry unit was substituted for 12th Hussars and the rest of the infantry are 4 Landwehr battalions. I still have not decided about the 4th Landwehr unit.

Large Lasalle units will have 36 infantry on 6 bases, while regular units will have 24 figures on 4 bases, all Cavalry units will be large with 12 riders on 6 bases. I have decided to move my bases from 3 figure to 6 figures, so my smallest units will have 20-24 figures, but more about that later. So there we have it; FML Nordmann's AG at Wagram forced into a Lasalle Army List.