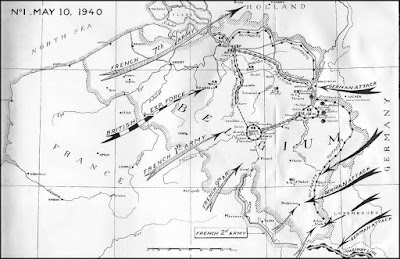 Blitzkrieg 1940 was released for Chain of Command in the early fall.  This much anticipated  CoC source book is the first released and covers the Western Front in 1939-40. It contains several new army lists, some new rules as well 5 new scenarios. It is a great resource.

I have a good German force already in place and aside from some Early War German AFV's, I can easily field a complete force. But what force to pick on the Allied side? After having a good look through the army lists and knowing my penchant for the underdog (read Winter War Finns), I decided to go with a Belgian Force. Having the Skirmish Campaigns book Hunters of the Ardennes; I decided to go with the Chasseurs Ardennais.

Intersting core platoon with 2 very large infantry sections of 16 men as well as a D.B.T. 50mm mortar section. I will go more into the figures selected as well as the painting process in another post, but suffice to say I painted a lot of figures in 3 weeks.

Going back to the Hunters of the Ardennes booklet, I decided to go with the first scenario describing the original advance of Schützen Platoon of the 1st Panzer Division just after crossing the border of southeastern Belgium from Luxembourg as they advance toward the village of Martelange in the early morning of May 10, 1940. Trying to slow them is a platoon of Chasseurs Ardennais. The OB in the SK booklet had a squad aside with some supports but I decided to go with full platoons as laid out in the 1940 CoC source book using the Going with a Bang scenario. For details of the scenario please refer to the source book, but essentially it describes an action with a defender withdrawing before a superior attacker while carrying out demolitions to slow the advance. Just perfect for the first day of the German attack into Belgium.

Myself and Greg played the scenario this past Saturday. Since this was the first outing for the Belgians, I took the liberty of playing the defender.

So the game began, as usual I took few pictures. I used a new teddy bear fur mat as the base terrain, not really sure how much I like it. I think it needs to be trimed down and I need to overspray some colour variation. My Belgian basing also need some work, another spray of mat as well as some flock to the bases.
It was a pretty quick game, I wish it had gone on a little longer. I had a good patrol phase and secured the high ground quickly. I think we only had 3-4 double phases in a game which only went 2 turns, but certainly a decisive Belgian victory.

Blitzkrieg 1940 source book was well worth the wait and I look forward to getting in more games with my Belgian force. I have a game planned with Mike this Saturday I suspect he will be interested to get his Germans on the table.