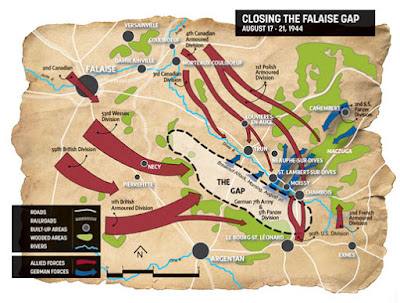 Yesterday we got together for our somewhat delayed 5th game in our Falaise Gap campaign. This is the first scenario in phase 2 of the campaign where the German Forces counterattack the Canadian Forces who have now have defensively positioned themselves is St Lambert sur Dives. The Germans are now the attacker and have a choice of which of 3 scenarios to play. Mike picked Outflanking which is based on scenario 5 in the CoC rulebook: The Flank Attack. I felt this was going to be a tough game for me as the Germans have a fresh platoon of Fallschirmjägers with 2 LMG's each. The Canadians still had there original platoon and although there were 6 reinforcements, were still down 8 men from platoon strength but also suffering from a loss of command with 1 SL and 3 JL's newly raised from the ranks (4 out of 5 leaders with 1 reduced CI each).

This is the first game I have every had at my house, which made things very easy as the terrain did not have to be set up the day of the game (Mike has a great terrain table in RI, but is missing some terrain pieces so we still had to set up on the day of the game). So when Mike arrived we were all set to go.
I was able to mimic this pretty well on my table as you can see below.

I think though I will use the graphic from the campaign booklet to illustrate the game.
So we started the game from the above positions. My basic strategy was to not to deploy my forces until they were in a good position and in close range to have a good chance to take out the Germans. As I was severely undergunned (my sections were all undermanned and I think the best firing dice I could muster was 10d6, while the Germans had I believe 19d6 firing from all their FJ squads, remember also that I really had little ability to remove shock as I was down 4 CI's to start the game). I also wanted to have CoC Dice in hand so I would have some maneuverability. I had 9 supports and Mike 12, I took Allied Air Support (Mike threw a 6 so that came to nothing, I was hoping to take out a full squad of his FJ's before the game even started), 1 entrenchment, a UC Bren team with JL and an extra Piat team. Mike took a Panzer IV, a sniper, and some Panzerfausts. I do not remember exactly how the game played out but the gist is as follows. I should also note that we both diced poorly on the Force Morale and started with a FM of 8 each:
Well it was a fun game, a bit weird though in that I had so many double phases of little value. I did figure how to use covering fire though and I can see it's utility to suppress an enemy section while moving a second section into position. Very little attrition on either side, the Germans lost 6 men and the Canadians 2 and the updated tracker is below. 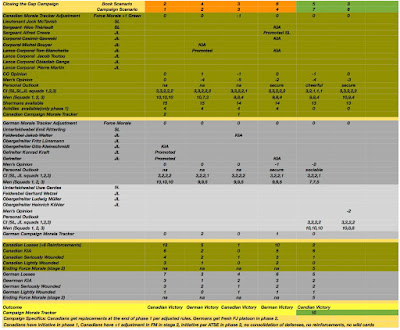 We are hoping to get our next game in this coming Saturday, we will return to the Hobby Bunker for this one. Need to spread the Lard!