Here is my first unit of Austrian Grenzers for my Avantgarde Division of my Austrian Lasalle Army. Still working with photoshop to improve the lighting, I believe I could have gone a little further here. The Grenz were the border forces of the Austro-Hungarian Empire. They functioned usually as light infantry and served with advance guard units. I believe most of the details for the 13th are correct, they were first raised in 1766. The unit was based in Northern Moravia now in the Czech Republic.

I elected for this unit to have white leather, by 1809 the 13th were in brown tunics. I have tried to paint the drum correctly, but still have left off putting stripes on the flagpole.....next time. The buttons may be wrong, I painted yellow and I suspect they were white.

There appear to be quite a few Serresaner (the fellows with the red cloaks) in this unit, Doc Smith tells me they were Balkan muslims who acted as sharpshooters, scouts and even police in the Austrian army. 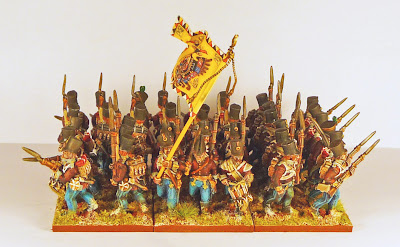 Next up the 3rd Uhlans!

It is hard to believe that it has been 6 weeks since my last post, in between there was a lot of shifts and a 2 week vacation to Newfoundland, but I am now back in the saddle and have started to paint again.
First new unit off the table is the first battalion of the South Essex, the 105th regiment in the British Order of Battle. I know you asking, why would anyone pick the South Essex of all the units in the British Army. I could say that I had a box of Perry British infantry containing both infantry and rifles and really it is the only battalion and I can think of which fielded both in a single unit. But the true reason is that I was recently absolutely enraged by a series of posts in TMP, where several members disparaged the Sharpe TV Series. This is just something I can not understand, some said none of the actors were any good.........Sean Bean, Pete Postlethwaite, Hugh Fraser, Michael Byrne, Brian Cox, Féodore Atkin, Michael Cochrane and Elizabeth Hurley.........what is wrong with these people, Elizabeth Hurley even showed her "lovelies". And then they went on about the size of the battalions as portrayed in the series and this is from people who scale napoleonic battalions at 16 little metal figures..........get a life..........what a...holes!! Clearly I needed to calm down or I was going to end up having a "Porterhouse Blue", so I decided to channel my anger into a tribute to the TV series and Bernard Cornwell. And I decided to paint the South Essex.
A Short History: The South Essex arrived in the peninsula in 1809 under the leadership of Lt Col Sir Henry Simmerson. It served through out the peninsular campaign being assigned to multiple different divisional commands. Lt Sharpe, newly gazetted as an officer, joined the light company of the South Essex with his platoon of riflemen. The South Essex lost their colours in the fiasco at Valdelacasa and at the soon after their strength had dropped from 850 on arrival in Oporto to 550 men. As a punishment for Simmerson's incompetence and cowardice, Wellesley made them a battalion of detachments. Fortunes were redeemed, however, when the battalion serving in the 3rd Division under Lt Gen Hill, Sharpe captured an eagle at the Battle of Talavera. They then served on the Lines of Torres Vedras where they were broken into company detachments, it is during this period that Sharpe's light company saw many adventures. The battalion missed the Battle of Fuentes de Oñoro because they were still understrength, but did serve and gained battle honours for Busaco, Ciudad Rodrigo, Badajoz, Salamanca,Vittoria and Toulouse. Simmerson had been send back to London after the Battle of Talavera, he was followed by Lt. Cols' Lawson, Windham and Leroy; who was killed at the Battle of Vittoria. By then, now Major Sharpe returns to England in a recruiting effort which cumulates in Simmerson's ultimate downfall, new recruits for the battalion and the installation of Lt Col Girdwood as commanding officer. By now Sharpe has effective command of the battalion and at the same time has gained the patronage of the Prince of Wales. The regiment now has the honourary title of the Prince of Wales Own Volunteers. The battalion is reformed under Lt Col Joseph Ford after Napoleon's escape from Elba. The now Colonel Sharpe, has been seconded to Dutch general staff under the Prince of Orange, but is given the command of the South Essex after Ford's death. The South Essex crowning glory was the defeat of the Old Guard under Col Sharpe. The regiment was broken up in 1817.
Anyway, back to reality. Here we see the South Essex arrayed in line, all Perry plastics aside from the mounted Lt Colonel which is a Front Rank figure. The basing is for Lasalle, but will work equally well for the Field of Battle or Republic to Empire rulesets.

Here we see the right wing of the battalion, including the grenadier company. I initially used Army Painter midtone, but it was a little too dark as you can see on the drummer's stand. I used the light tone on the grenadier stand. 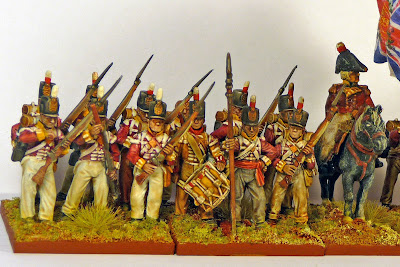 Here we can see the left wing with the light company as well as the command elements. Interestingly enough, the light infantryman is carrying a Baker rifle, he must of learned something from the riflemen. I like how the riflemen came out. 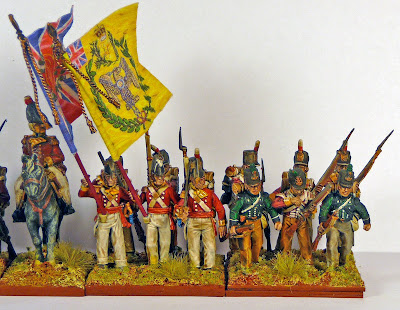 Here we can get a great view of the regimental colours of the The Prince of Wales Own Volunteers as supplied by Maverick Flags. This is one of their linen flags and it is absolutely brilliant. I am going to try to talk Stuart into creating a pennant for my 3/95th Rifles command stand. I can highly recommend this company, his response time is phenomenal and the quality is really quite excellent. 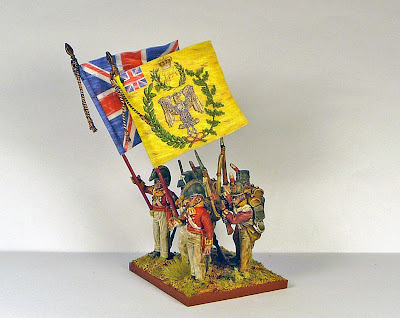 Finally, let me illustrate one aspect of my new basing plan. I wanted the ability with my battalions to break off the light or grenadier units to form ad hoc light or grenadier battalions. After some thought, I came up with the following plan. Rather than using a 40x40 mm 6 figure base on all the figures, I used two 3 figure 40x20 mm bases on the end units which are magnetized. 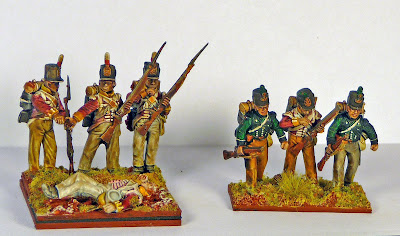 Additionally, I can use this method to mark casualties. 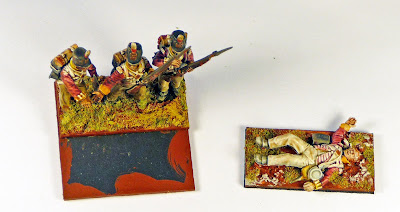 Mandatory back view..........we get a good view of Simmerson retreating as the battalion advances at the Battle of Talavera. (Free FR Sir Thomas Picton figure to the first who can identify the inconsistency in this statement and photo)

Anyway, thanks for looking and like I said a free Sir Thomas Picton will be send postage free to the one who spots the inconsistency as noted above. First correct response in comments wins the prize.
(23962)
Posted by john de terre neuve at 18:29 14 comments