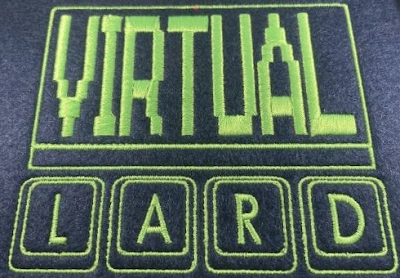 Last Saturday, I got to play in Virtual Lard 5. I was bit pressed to fit a game into my schedule as I was working at 1300h and the game started at 0930h. I took the gamble however and decided to play. There was a very interesting Early War game offered using the CoC ruleset involving a German attack on a Dutch position during the initial invasion of the Netherlands in May of 1940. The game was put on by Karl and his son Luke, I had heard their games were quite good so I was looking forward to it. I had played the Danes in a very similar campaign game recently, and was wondering about the similarities.
Leading up to the game, I had very little time to review the material so I was quite surprised when I signed on to see that I was playing against Rich Clarke of all people....the actual author of Chain of Command! A"chance" to beat someone at their own game....both literally and figuratively. Playing with Rich was Andrew, who I could also see was quite experienced. They were playing the Dutch defenders. Playing with me was Glen, who also had some experience.
Well the game was beautifully set up and very well run. Karl and Luke are clearly experts at running Virtual games. We all know what the Germans look like but I thought I would take the liberty of posting a photo of Luke's superbly painted Dutch.

Well how did the game go. Well let us say that I made it to work with plenty of time to spare! I am not sure what got into me in this game, I am in no way a superb tactician but I usually manage to win about half the game I play against experienced players and I can not say that I do not play often. I can say that I usually prefer playing defence over attack but I have played quite a few games as the attacker. Anyway no excuses, I made an absolute shambles of the game! In the blink of an eye our Force Morale was down to zero while the Germans were still at 11. I am not sure what I was thinking. A screen grab from the game clearly illustrates poor planning. 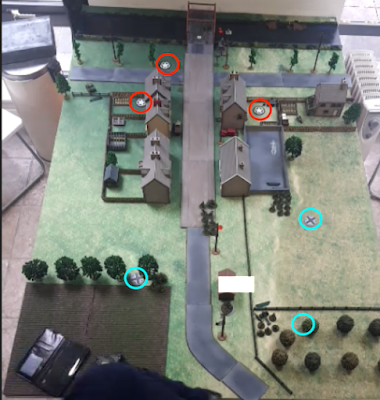 As you can see from the above the German attackers are coming from the foreground and essentially have to prevent the Dutch from blowing the bridge. The Patrol phase actually went quite well for us with our JOP's (light blue) well placed.
But that was about it. The troops in the lower right of the photo are a le. IG18 with a mortar team, why I placed them there without absolutely no LOS to the bridge now escapes me. Also see a squad of Germans in the road in the open....why were they there? Oh dear!
Anyway the Dutch made short work of us and I was off to work.
Not withstanding, it was as usual a lot of fun, I met 4 players, who I had not met before. I believe the game hosts' Karl and Luke were in Dublin, Glen was in the UK and Andrew somewhere south of me in the US. I suspect Rich was in Lard Island. Many thank to all and let me say "I will be back".
Finally thanks to Jeremy for setting up another great event.
Posted by john de terre neuve at 07:50 2 comments 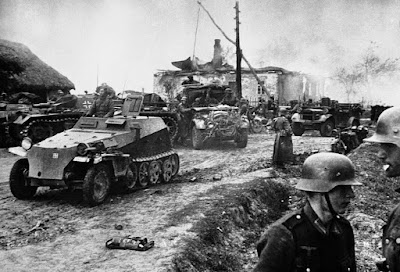 Eero has just published his latest report on our Battleground Command campaign, have a look at some great photos and keep up with action.
Posted by john de terre neuve at 06:27 1 comments 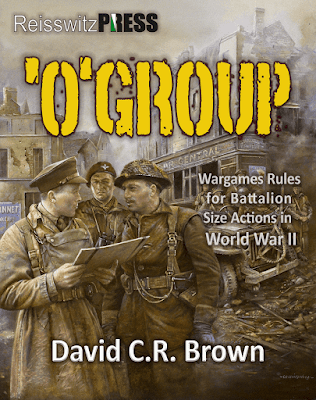 I recently received the latest ruleset put out by Reisswitz Press, a TFL affiliate. This is the 3rd ruleset written Dave Brown for the publishing company. I really have enjoyed playing Général d'Armée and Pickett's Charge, although I have not had a chance to play these 2 games during the pandemic.
I was not initially planning to play this game but I usually buy everything put out by TFL to support the company. The pre-sales videos and chatter however did entice me into having a look and I said to myself if I can play this at a very small scale, I might be interested. Once I got the book and had a good read through, it seemed that it might be easy enough to use centimetres rather than inches. Doing some simple calculations and knowing that you could get a good game in using a 6x5' terrain board with inches, I found that it might be playable on a 20" (60cm) by 30" (72cm) terrain using centimetres. I had already planned to use 6mm vehicles and figures. I had never done any realistic terrain for 6mm figures, so this was somewhat intriguing to me. I had done some terrain for Rommel, but for this game the terrain is more schematic than realistic. I like Rommel, but it feels like a boardgames converted to the tabletop.
To start testing my assumptions, I started to research making terrain for 6mm gaming. There was a lot out there. I should mention that I plan to focus on Early War Ostfront, so I was more imagining large forests and undulating steppes dotted with small villages and farms. A much more open terrain than Western Europe. I found an old piece of mat of which was 20x40" so I started with that. I made some forests as well as some buildings on a resin printer in order to construct some variable sized BUA's. I had a 6 mm river and some hills that were scale agnostic so I put together a terrain for our first game. I already had some 6 mm vehicles left over from my Rommel project.
Next up was what to do for figure bases. I had already decided to not base any vehicles, so that was easy enough. Most people appear to be placing their infantry sections on medium FOW bases (50x32mm). Some calculations were performed and I decided 20mmx15mm would be an appropriate reduction. I set up my FDM printer and out popped multiple bases. I already had some 20 mm round bases and some 30mm square bases, which I will use for attached heavy weapons/company commanders and unattached heavy weapons respectively.
I then went ahead and painted these bases in their respective army colours with splashes of green, blue and yellow for A, B and C companies. Our game was going to be virtual, so visibility is pretty important. Next I had to address the need for markers, I had bought the mdf token set from TFL, but I felt these were a bit large. P-Y came to the rescue here with his design capabilities and before you know it we had STL files for the Combat Patrols and Status Tokens.
So it seems we were all set to have our game, which we played this past Wednesday. I had watched both the TFL and Storm of Steel videos, which were both quite helpful. The game actually went much better that I would have thought. The scenario and the terrain appeared to work well and we had no problems with visibility over Zoom. I took the Russian defenders while P-Y played the German attackers (he won the toss, but I do prefer being the defender). We played for about 3 hours and got through 6 turns, we made a lot of mistakes but the game is quite intutitive and as we went on we really only needed to refer to the QRS. We had a lot of questions after the game but after a scrutiny of the rulebook and a rewatch of some of the videos, I was all set and only had to ask one question on FB. We plan to give it another go this Wednesday, same scenario. I now feel confident, however, that the game is quite playable on a small terrain, using centimetres with 6mm figures. So confident, that I have placed a largish order from Heroics and Ros for Soviet and German battalions.
OB Used 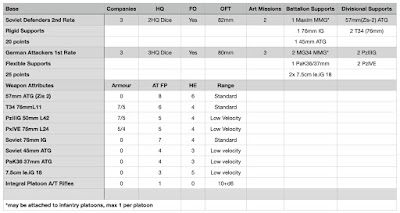 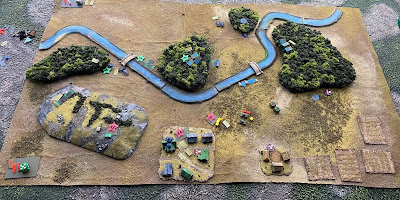 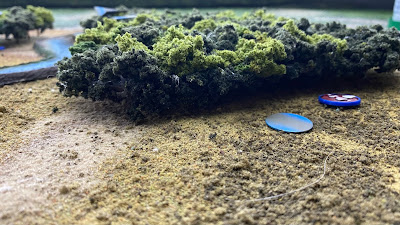 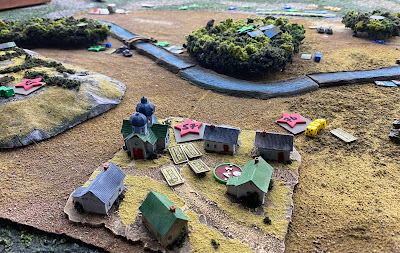 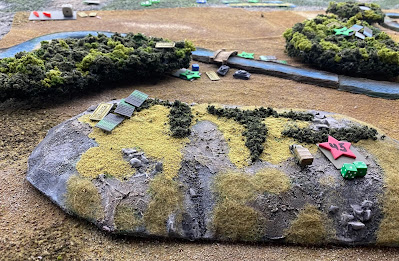 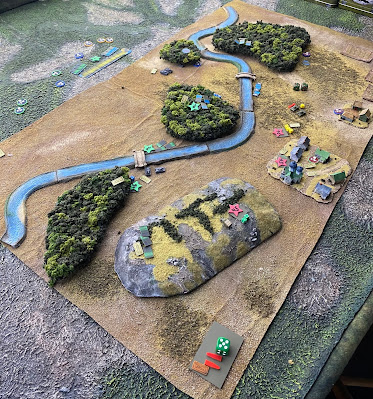 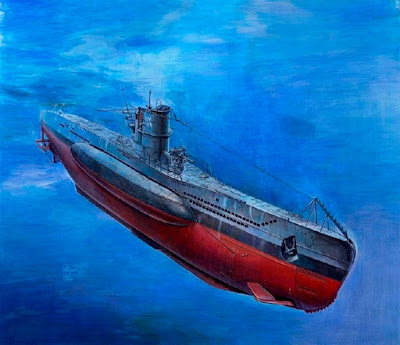 This past Thursday we got together for our session of UBOOT. This game was a little different as the stress of the voyage has now gotten to our Captain, who had to retire to his bed with a bottle of Schnapps ) I am hoping it is not that horrible peach flavoured one).
Out games master Heikki, decided that we would gather 24 hours of reconnaissance and then he would present it to us and we could make a recommendation to our Captain, Eero, when he came out of his bunk on how to proceed. As you know we had planned a eastern approach to to Scarpa Basin, but we were all questioning the prudence of this plan.
So Kemppoff (First Officer), Kasparov (Chief Engineer) and Mikalov (Navigator) got together and reviewed 24 hours of surveillance information, this included both hydrophone and periscope data. Heikki really did a fun job on this as we had our Lloyd's Registry of ships as well as him putting together a video with encapsulating 24 hours of data collection.

#1 - Periscope sighting of small vessel coming towards land from NE; Watch Officer draws in periscope and takes UBOOT down to 100 meters. Hydrophone keeps listening and tracking the vessel: slow sleep, one slow screw, passing north of UBOOT position, no sign of alarm. Vessel continues toward land and disappears into narrow sound (salmi) between SOUTH TOWN and RUMLEY POINT.

#2 - same time as fishing boat is going into narrow sound, Hydrophone picks up another observation in direction SW from UBOOT position, at distance of maybe 8 NM (nautical miles). Fast small vessel… appearing from behind the LYTHE point… then suddenly slows down and continues to arc slowly…

Sea is quiet all around.

UBOOT comes back up to periscope depth (20m)

#4 - soon after, Hydrophone picks up yet another similar slow single screw, large vessel, heading toward NE behind the previous spotting.

No periscope sighting yet of either one.

PERISCOPE SIGHTING of lighthouse coming to light south of LYTHE point, light stays on for 20 minutes.

ship #4 can be heard changing speed and course close to LYTHE point.

AIR#1 - Periscope sighting of airplane coming out from the direction of Scapa Flow Naval Base.

Watch Officer takes UBOOT down to 150 meters, so as not to be spotted from air.

at 1245 Airplane flies back toward Scapa Flow Base and disappears over land.

UBOOT comes back up to periscope depth.

PERISCOPE sighting of ship#4 from behind, going toward NE.

TIME 1315 vessel can be observed to change course slightly and heard to accelerate speed.

PERISCOPE sighting of lighthouse at NE coming to light.

Vessel estimated to be most likely TOWN CLASS destroyer…

PERISCOPE sighting of warship from behind, and Officers recognize vessel most likely as:

periscope sighting of lighthouse coming to light SOUTH of LYTHE point, for 20 minutes.

Course heading toward UBOOT position - but quick course change at 2 NM from UBOOT position, continues toward land and disappears into narrow sound between SOUTH TOWN and RUMLEY POINT.

#8 - periscope sighting of small boat coming out from narrow sound.

Watch Officer draws in periscope and takes UBOOT down to 120 meters.

Hydrophone keeps following vessel… one slow screw… as it comes directly toward UBOOT.

Sea is calm, and quiet all around

Based on observations of enemy movements,

Officer’s Recommendation: In respect to a eastern approach to the basin, the southeastern approach appears to be used by smaller boats. No ships observed going through the Northeastern approach. Enemy appears to use lighthouses on rocky outcrops to guide what appears to be convoys east of the Scapa Basin.  Movement of large vessels is covered by probable torpedo-armed aerial surveillance craft. Our conclusion is that the best approach would be from the south, by following in larger ships’ wakes.