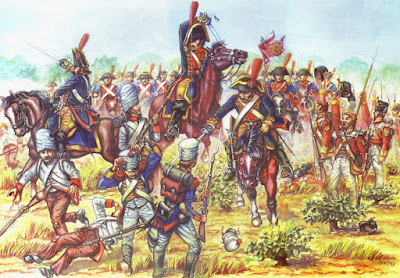 I have been interested in adding a Spanish force to my Peninsular war units for some time and the commissioning of a new 18mm army allowed me this opportunity. I really know very little about this army and I have to say researching this force was much more challenging than I had expected. I did not even know where to start, I knew I wanted a brigade sized force rather than a division. The Napoleonic variant of Chain of Command that I favour as a ruleset usually has 3-4 brigades per side, so I felt the addition of a Spanish unit would add some variability to a game.

With some research I found out that Spanish Divisions in the Napoleonic era were actually brigade sized so this worked out well. I then left it to Pep, the commission painter who would be doing the force, to pick something that he was interested in painting. He decided on Portago's 3rd division at the Battle of Talavera in 1809. I asked that he add a unit of artillery and cavalry to the force and off he went.

The Spanish Army underwent a massive change after the battles of 1808, where the regular army was essentially destroyed by the French. The cities and regions of Spain responded to these loses by raising many volunteer infantry units. Steven's Balagan website provides a very nice overview of the Spanish Order of Battle during the Peninsular War. Here is a direct link to a painting guide on his site.

Within a couple of months he had the force painted and I received that last figures about a week ago. He really did quite a nice job on them. The only Spanish Napoleonics I had previously painted were from an earlier period when they all had white uniforms, so I was happy to see the blues and browns that make up this post 1808 force.

The army is made up of regular and volunteer line units, a light unit as well as a militia unit. I would love to hear from readers on how they would rate the units in this force. GB-CoC allows for elite, seasoned and untested units. The most valuable resource I found on line was actually the blog of another wargamer, JJ's Wargames. I found this excellent painting guide on his site for those who are interested. You can also read an excellent series of posts about his Spanish army and the Battle of Talvera on his blog. 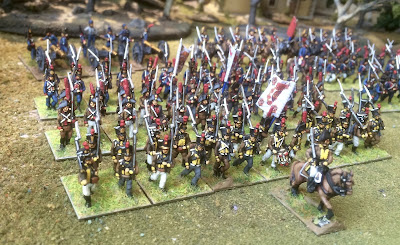 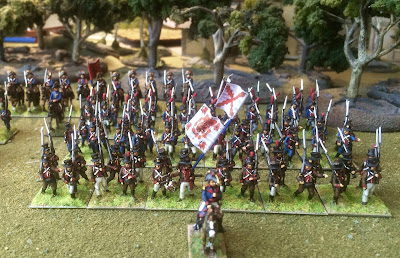 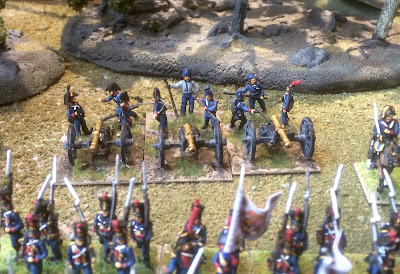 Assault on the Strip: A CoC Game at Huzzah

Yesterday I drove up to Portland, Maine for the annual convention put on by the Maine Historical Wargamers Association. This is the second year I have attended, unfortunately personal obligations prevented me from staying the whole weekend, so Saturday was it for me. It looked like the convention was well attended with several games in the 4 time slots from Friday evening through Sunday morning. Terrain was generally of good quality and it was obvious that some of the game-masters had put significant effort into putting on their games. I had a look through the roster and it looked like most games had a full complement of players. I believe there were about 10 vendors there and the booths looked well stocked. I was tempted to buy a mouse pad gaming mat (I am not sure I really need more mats) but was able to control myself. I was happy to see Richard from Adventure Terrain there, it is the first time I had met him. He had a well funded Kickstarter about 3 years but was unfortunately unable to deliver the product because it was so heavily over-subscribed and as a one man team, he just could not do what was promised. He did return the backer's money with what I suspect was significant personal sacrifice. We had a long interesting chat about this and it was nice to see that he clearly is back on his feet. He really has an innovative terrain product with nesting bases and magnetic tree and rock inserts. I was very happy to finally obtain these and made a substantial purchase.

There was one major disappointment though, I was really looking forward to a demo game of Sharpe Practice 2 and unfortunately this ended up being cancelled on short notice. This was being put on by one of the TooFatLardies resellers in the US and unfortunately their shipment of rulebooks and accessories  did not arrive. This was quite unfortunate but I understand perfectly a commercial venture's reluctance to set up a game with no product to sell. They did put on a beautifully terrrained CoC game which appeared to be well attended. I have to say I was really pissed about this as I have yet to play Sharpe Practice and I was hoping to get a demo in as I am planning to introduce the game to some gamers in Montreal next month.

I did however get in a CoC game set in Pacific Theatre in 1944. It was a lot of fun and the games-master Ken Eckhardt, a gamer from New Hampshire, did a great job of refereeing. I think maybe this is the first refereed game I have played and the element of not knowing what the other side's objectives are was quite a bit of fun. The game was taken from the Battle of Peleliu, specifically on day 2 involving the attack on the airfield. There were 6 players, 3 aside. Two of us were seasoned CoC players and the other 4 were novices. The seasoned players were split, I ended up on the USMC side. The USMC had the type F organization with 3 Fire teams with one BAR and 2 riflemen per team. Three squads in the platoon with a corpsman in the Platoon HQ with two SL's. We had 6 supports so took an off table mortar and a bazooka team. I am not sure what the Japanese organization was, I know they took a MMG as a support but I am not sure what else. I took a few photos and will describe the game with their aid.

By then it was 5pm and I had to race back to Massachusetts. I had a fun day aside from the dissapointment about Sharpe Practice. This is a pretty small convention, I believe but it was well planned and attended. Nice job.
Posted by john de terre neuve at 08:09 14 comments