Chronica Iohannes: The Battle on the Bank of the Tees 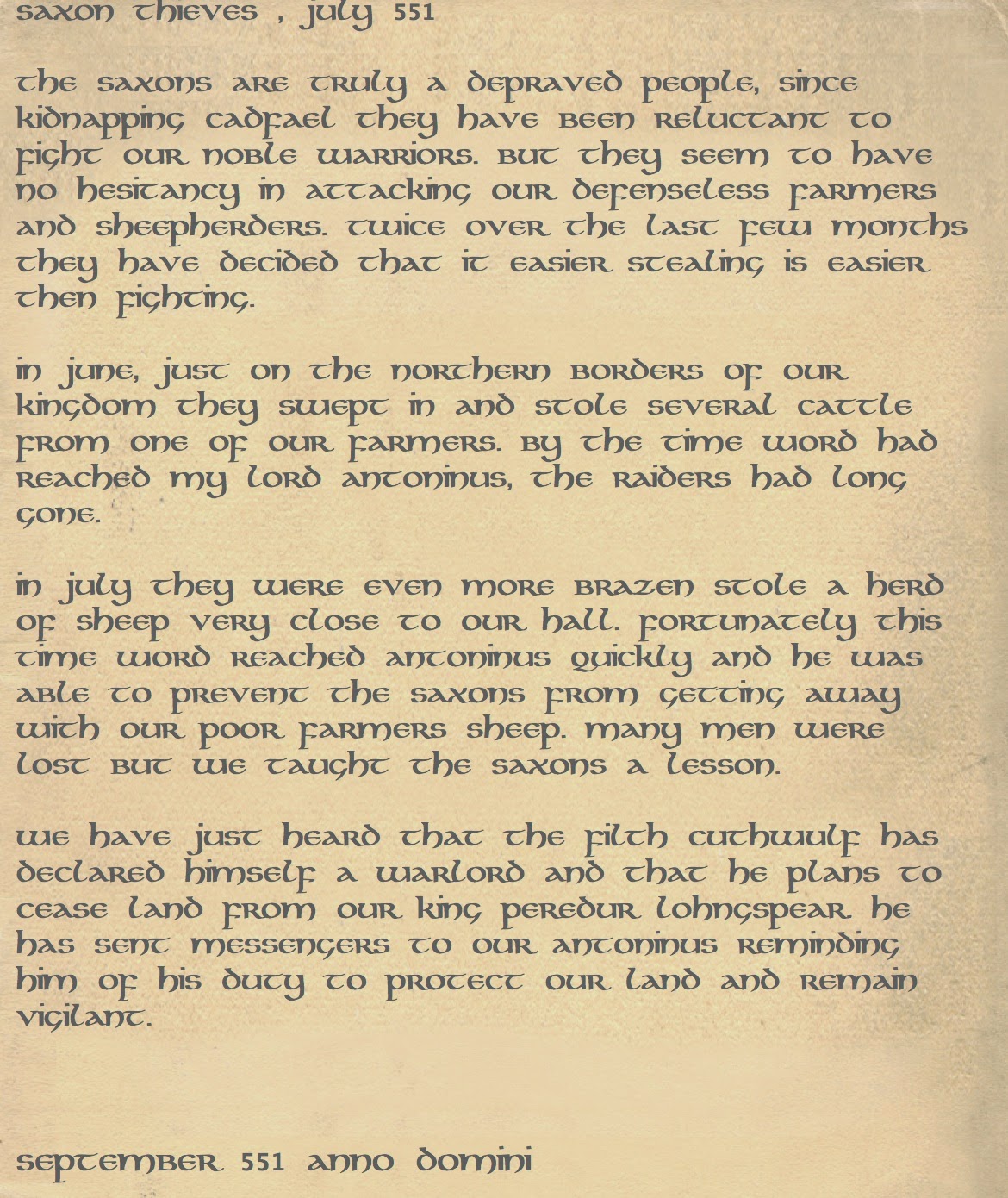 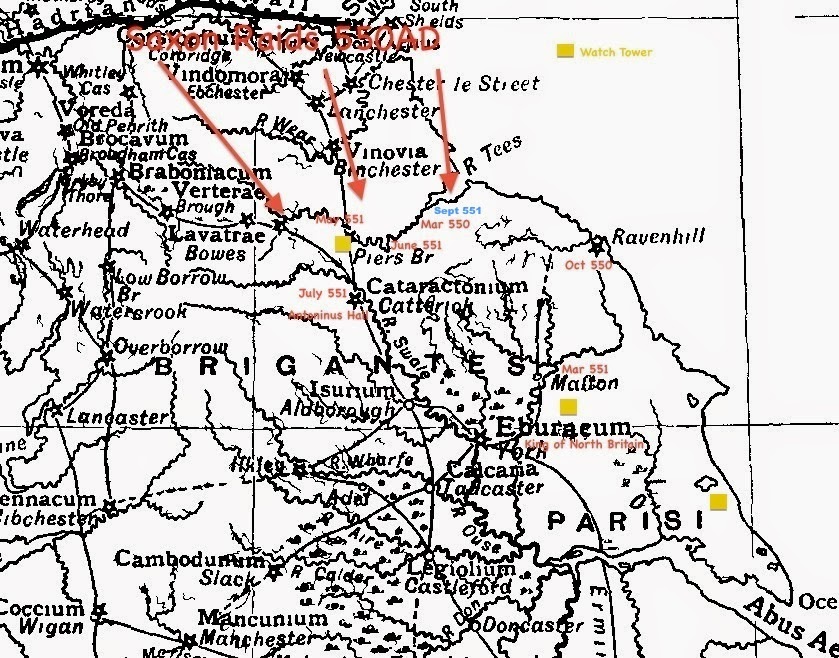 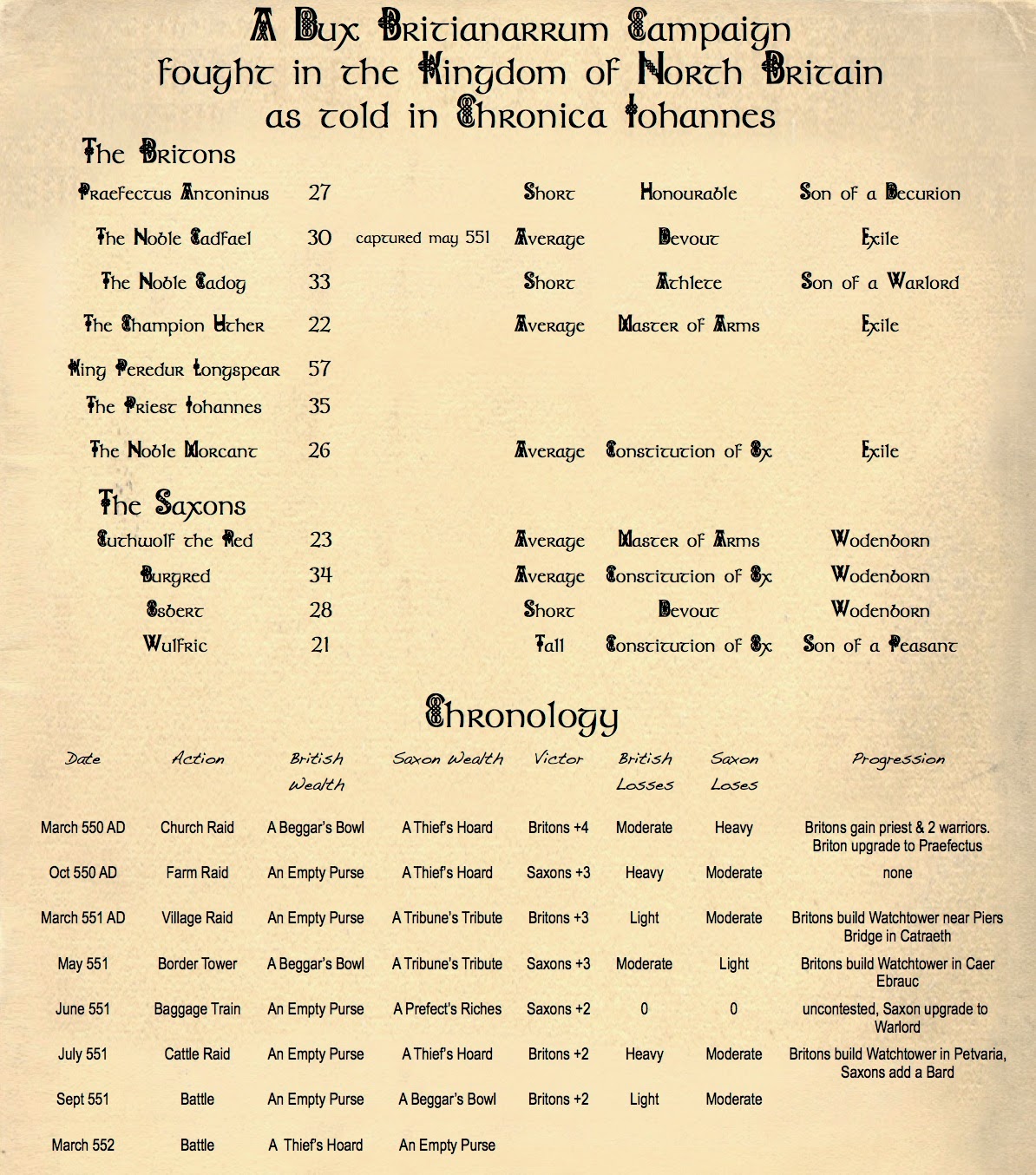 Last Thursday after a brief Xmas break we had the next installment in our Dux campaign. Adam has now made his Saxon leader a warlord so we had our first battle. It was an extremely close game with very few casualties, 7 figures lost by the Britons and 9 by the Saxons. Fortunately my levy shieldwall was able to withstand the Saxon assault and the Saxons made an uncontested withdrawal. Time was a little short for this our first battle so there were no pre-battle festivities, but I suspect that many songs will be sung, much mead will be taken and there will be a clash between our champions in our next battle tentatively scheduled for next week. As usual an excellent AAR can be found on the Fencing Frog Blog.

Tactical Situation:
The German morale has risen somewhat after the German victory at Cardonville. Leutnant Fuchs had already withdrawn his troops to the German HQ in Osmanville. The victory at Cardonville had given his troops time to add some extra defenses. Their morale fell somewhat though when they saw that their reinforcements were Russian Hiwis and artillery gunners. Leutnant Fuchs carefully cleaned his MP40 and prepared for yet another fresh American assault.

Yesterday, we played our 7th and 8th games (sort of gives it away on who won game 7) in our Normandy campaign. Although the Germans had won the 4th scenario (game 5), I felt it best to make another tactical withdrawal, bringing us to our 7th game. This was the final scenario in the campaign. In this scenario, the Germans had their original platoon from the the first and second scenarios. I was down 8 riflemen and had 13 supports so I had elected to take the support option of the Hilfswillinge Volunteers, thus adding another -1 to my morale. I also took 2 minefields, an FO, and HMG team. I already had 1 barbed wire defense because of my tactical withdrawal in game 6. Mike had 19 supports. I believe he took a Sherman, 50mm Mortar, HMG team and a FO. The Patrol Phase went well for me, as Mike only got 1 free move and I was able to hold his JOP's to his side of the terrain. Mike started with a morale of 9 and I had a morale of 8, not bad for having to take a -2.

I again played cautiously bringing on just my HMG team and FO in the first phases of the game. The HMG team was again of little value as it was just outside of 24" of American front line. The FO was of more value though as I brought him on with the SL and was able to get off a bombardment pretty early, I gambled and shot it off without an aiming shot and landed right on target. Mike had two squads and 2 support teams in the area of the bombardment. I placed the FO and the SL in a two story building but also added one squad just outside in order to soak up the long range hits from the Sherman on the building. This worked well as the Germans were able to pulverize the Americans who suffered a morale loss about 90 minutes into the game. I had lost my HMG team only and was able to take out 24 men before Mike's morale failed. This was the quickest game we have had.

It was only 1pm so we decided to have a quick lunch and move on to Game 8. The terrain takes at least an hour to set up and I was happy to do this. I have to admit I was pretty pleased as this is a tough game for the Germans and I had now denied the Americans a complete victory.

I quickly did the post game throws, and although my men's opinion had gone up by 2, but I still had a -2 on morale. My CO's opinion had also gone up so I got one more support. My supports were the same as the first game, but I took an adjutant. Mike now had 25 supports, he took an extra Sherman. Both the patrol phase and the Morale throw did not go well for me as in the first game. Mike was able to put a JOP in one of the buildings half way down the terrain. He had a starting Morale of 11 while I had a starting Morale of 7!

Mike was more careful this time spreading his advance out so he was not caught in a single bombardment. I was slower to get my FO working and when I did get one off it was never as effective as in the first game. Before I knew it the two American had seized the midground and were in heavy cover behind stone walls. Mike also threw several double 6's and I was doing poorly on the Morale table. I used the cover of the bombardment to scoot one of my squads across open ground to protect the American advance on my left flank. Mike then threw a another double 6 and a 5 thus getting a Chain of Command dice.  He was able to end the turn, remove the smoke and mow down my troops in the open. I was down to a Morale of 2, so I decided to withdraw as it was pretty hopeless.

So a Marginal American victory in my first CoC campaign, it was really a great time. Hopefully we can start another campaign soon, this time most likely Winter War. I am working on putting the campaign together now, I am thinking a campaign along the Raate Road set in January 1940 and this time I will be the attacker!

Tactical Situation:
The Americans in their advance towards Osmanville (the German HQ) have eliminated all threats on their left flank, but they now informed that a German platoon is situated on their right flank, they are ordered to attack to clear this threat. The American platoon advances with a Sherman in support.

So this was our 4th game (5th turn) in our campaign, I had to rush into the Hobby Bunker early last Saturday as it was game day and the annual party and it was necessary to secure a table, with luck there was one un-reserved table left. This was a do or die game for the Germans, and I had worked out a pretty careful plan of action to stop the American advance. This is one of the two scenarios where I start with a fresh platoon as well as some fairly reasonable supports. The Americans had 14 points, if I have it right Mike spent it on a Sherman (required), a sniper as well a medium mortar team. I went all defensive with two minefields, 2 entrenchments as well as a HMG team.

My basic plan was to wait to the Americans showed themselves, and then plant down the HMG team in some entrenchments. They were to weaken the American infantry and then I was to bring on my platoon slowly at the most opportune time to benefit from their 4 man LMG teams. My Panzershreck team has been quite successful in taking out Shermans and if I was lucky and got a CoC die early, an ambush would work well.

It started well, with Mike having a relatively unsuccessful patrol phase with him advancing really no more then 18" from his edge. JOP's were placed and the game started, I was starting with a -2 on morale, we both threw poorly and Mike started with a 8 and I started with a 6. Mike had these new pink dice that were really quite lucky for him early in the game and he was able to advance fairly quickly. My much vaunted HMG team took some early losses without a whole lot of reciprocation by taking out Americans. The Sherman also seemed to cause some havoc and unfortunately my Panzerschreck team was quite unsuccessful in taking it out and was destroyed fairly early on in the game. By this time things were looking quite bad for the Germans. Aside from the first game in the campaign, I had been quite conservative playing very defensive games. Mike for the first time played a fairly conservative game, advancing his troop slowly and relying on his Sherman, sniper and mortar team to whittle me down at long range.

It was time to get stuck in I thought, so I just placed all my troops on the table and started to advance against the Americans. They had taken over the chalet in the middle of terrain, but I was able to rapidly advance up my right flank, luckily the LOS from windows really cut down their angle of fire. I was able to take out the Sherman with my Panzerfausts, the first attack failed but my second rifle team fired their weapon at close range and Kaboom! Really it then turned into a meatgrinder with us each trying to rack up morale tests on the other. I dropped down to a Morale of 2 and Mike was at 3 when I launched my final offensive push with an ad hoc team of my SL, 2 JL's, 2 riflemen and a LMG (this was the remnants of 2 infantry squads). I threw a 4 (enough to activate the two teams) and a 5 (giving me a CoC dice). Finally, the dice went my way: Lots of 6's. Mike threw his saving dice, more 6's, his rifle team broke and his morale failed. A German victory! I had lost 18 men but the Americans had lost 24.

On to some photos, unfortunately the batteries went in the camera but I did capture some action.