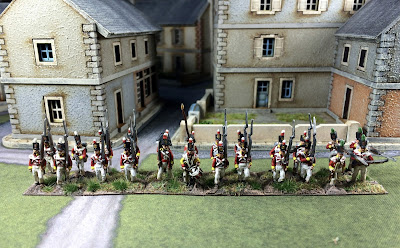 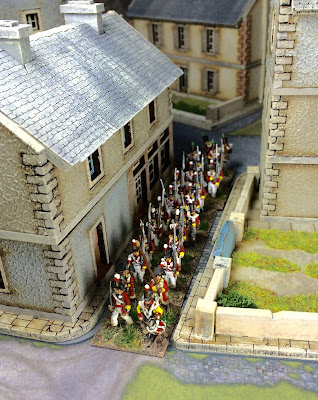 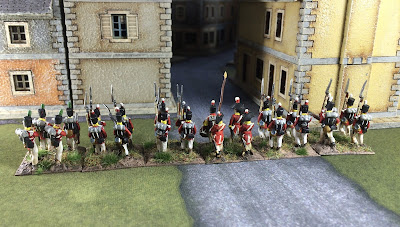 I plan to have a New Year post to discuss my 18mm OB, as well as to display the units I have already acquired.
Posted by john de terre neuve at 10:13 24 comments 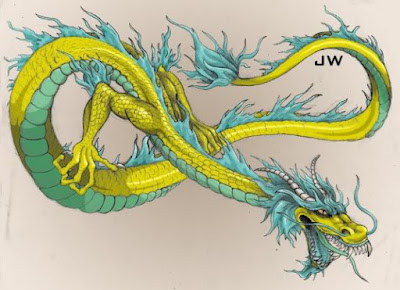 Over the last 9 months, I really have done little painting, but it is this time of year that heralds the Analogue Hobbies Annual Painting Challenge. Time now to wash the brushes and paint some figures.

My first submission is some figures I had left over from last year's challenge; The Inscrutable Tong and his gang. These figures are from Westwind Productions and like the whole Empire of the Dead line are quite impressive. I really enjoyed painting them. 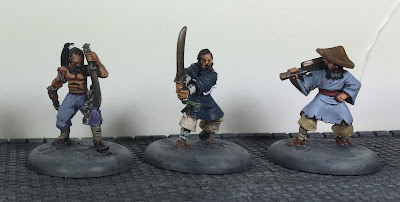 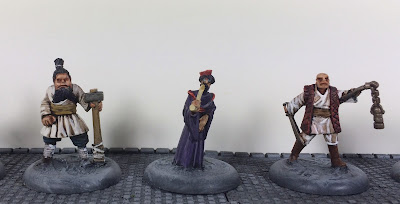 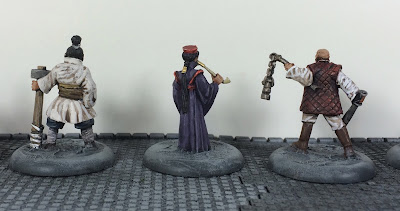 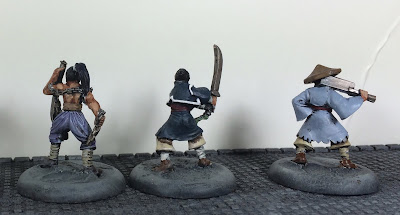 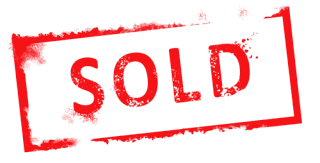 My sell off has been pretty successful and all that is left are half of the French. Most of the first rate infantry is gone, what is left is some plastic Victrix and Perry as well as one regiment of Foundry legere. More about these later.

What I would like to sell now is the remaining 5 units of cavalry and one remaining battery of artillery. The cavalry are quite nice and I believe painted to a fairly well war-games standard. The artillery are some nice cannon but I believe the figures are Bicorne, a particularly nasty brand and thus are going for a song.

If someone comes along and buys all six units then 10% off and free shipping. Otherwise paypal only and shipping by USPS Priority Post. Shipping will vary from 6-12$ depending on the box size.

These are very well priced, the cost for all 6 units is $450 with Free Shipping.

Closing the Gap: Panthers on the Prowl!

Closing the Gap: A New Chain of Command Campaign

We had our second game in our August 1944 Falasie Gap campaign yesterday. Mike (the Germans) invited me to Rhode Island for the game and it was a nice drive on a beautiful morning. Mike has quite the gaming set up in his house and we had a great game. Additionally his wife put on a superb lunch that was much appreciated.

Scenario 1: The Road to St Lambert

We played the first game in the campaign about 3 weeks ago, I am afraid I took no photos. Mike sent me one a few days ago but it somehow or another got deleted. I had actually played this game once and presented it on Gamesday at the Hobby Bunker in August. The terrain was pretty well laid out as you can see. The game resulted in a Canadian Victory, although I foolishly took a lot of casualties which is not good in this campaign. Here is our campaign tracker after the first scenario. 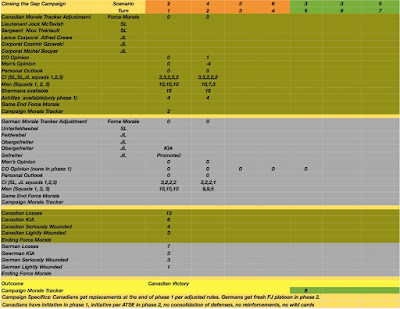 In our second scenario, Major Currie makes his first attempt to enter St Lambert on the morning of August 19, 1944. The Germans are well positioned and they have some Panzer IV's ready for action. This is a difficult scenario for the Canadians as they have to cross the River Dives, which is quite deep and counts as a major obstacle in CoC. For victory, the Canadians needed to secure a JOP in the greyed German zone. 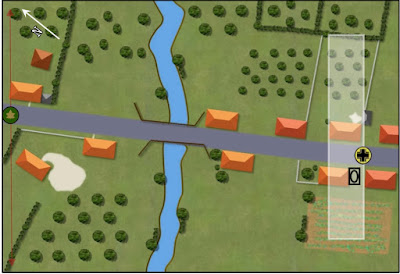 Well on to the game, I seldom remember to take photos during a game, but I did get some at the start.
For supports, I took a UC section with a JL, Piat team as well as a Bren team. I also took a FO with an off-table medium mortar team. Mike took a HMG team. According to the campaign rules, I had a Sherman and Mike had a Panzer IV.

I had a pretty straight forward plan, and that was to secure victory in this scenario with my supporting troops and preserve my core platoon as I had foolish squandered half a section in my first game. I would have liked to have got a JOP across the river, but at least 2 of them were on the edge but in retrospect, I am not sure how well this served me. The game started off poorly for me with a 8 on my Morale throw with Mike getting an 11. The dice were tossed, and laid down my smallest section. On Mike's first throw he got a treble 6 and that was it for them with a JL killed. Horrible throws on the Morale table ended up with me going down to a 6 on the first turn of the game! Not looking good.

I still felt my plan was good and set it into place as you can see in the last photo above. I was able to deploy my FO fairly quickly with a 2" mortar section throwing out smoke rounds. I also deployed a full section and my Platoon Sergeant behind the hedge. With this position they had good LOS for both the medium and small mortars and quickly laid down smoke to obscure the German squad 1's LOS to my combined section/mortar teams. I was then able to quickly get out a full barrage on top the German first squad as well as the HMG team in the house.

Time to advance the Sherman to take a shot at the Panzer if it appeared on the road. Mike throws another double 6 as well as completing a CoC Dice, he ends the turn and my Sherman is exposed to the Panzer and kaboom, it is taken out. At this point I have no real antitank weapons aside from 2 Piats! One get laid down in the hedge, but is too far away to shoot. I successfully call up another mortar barrage and again it is well placed and lands on the road reigning down further mayhem on the HMG team, German squad 1 and more importantly on the road. I bring on my UC section, as you can see the plan is to dash over the bridge and then advance on the German left flank which is poorly protected (the arrow on the photo above somewhat incorrect in that UC section has to cross the bridge and then verve to the left). I have a great throw and the section gets all the way to the bridge on their first move. Mike's turn, he throw yet another treble 6; the turn ends, the barrage and smoke again disappear, and he is now able to lay down suppressive fire on the UC section with the HMG team as well as fire the Panzer's cannon. The advance has been thwarted and Major Currie orders a tactical withdrawal. A German victory.

Well it was really a fun game the combination of Mike's excellent defensive tactics as well as some unlucky die rendered an outcome unfavorable to the Canadians. But my core platoon was kept essentially intact from the the first scenario and I will start the third scenario with the same number of men as the second. I was a little unlucky on the post game process and my Men's Opinion of my leadership has plunged and I am now -1 on my next force morale. Mike was also able to bring the campaign force morale tracker up to it's base of 10 with the victory and the destruction of the Sherman. Our next game is this coming Saturday, time to shine up the dice. 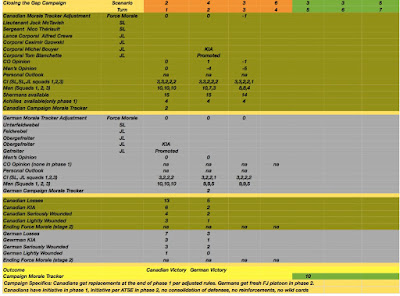 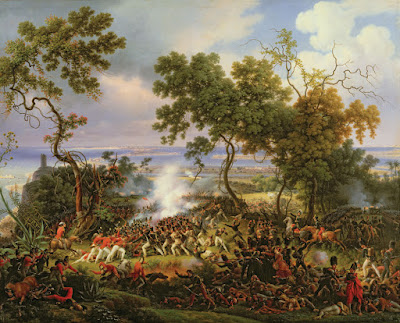 Myself and Adam got another chance to test the General Bonaparte meets Chain of Command ruleset last Thursday. The playtest version is now at v2.4 and is really coming together. It had been 2-3 months since we played the rules so they were a little rusty in the first turn or 2, but then things came together and the game moved along. This game was based on the Battle of Barossa with some heavy substitution in the OB because of my figure collection but for those who are interested in an authentic OB set up for GB-CoC one can download a version here. 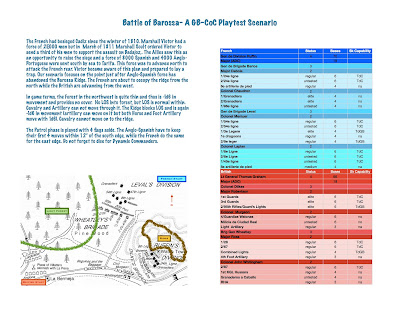 You can see that we got through several turns, it was a real back and forth game with cavalry, unusually playing a significant part. An excellent Action Report is on Adam's blog The Fencing Frog. We tried Adam's modified movement rules and they worked well. There was some discomfort with the range of the variable movement as now in the ruleset. For example, infantry battalions in column move 3d6, Adam has adjusted this to 2d6+4" thus adjusting the possible movement from 3"-18" to 6"-16". This played out well, we will have to see how the other play testers feel about this.

Overall, I am still enormously impressed by the rules. They play very well and the mechanisms are quite simple and the game moves smoothly. My main observation from this game is that it is very difficult to play a division per side game with 28mm figures on a 4x6' terrain. It really confirmed my choice to shift to 18mm Napoleonic gaming for this size terrain (I find this the most convenient size to transport and the club has mostly similarly sized tables).

Still some questions about ZOC and supports that we are hammering out in the play test group now. I have also put together an FAQ which one can download here. I will try to keep it updated. Finally a photo from the game showing the action. 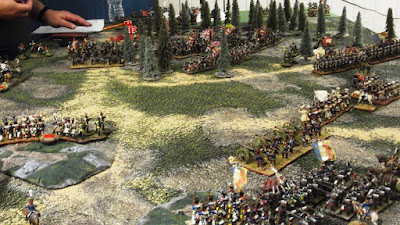 For Sale
I have placed several French Units on TMP or Ebay. For readers of my blog however special pricing is available......just make an offer.