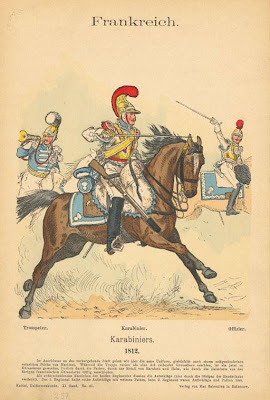 For my La Haie Sainte project, I needed 2 regiments of Cuirassiers and I do have plans to do a second. But as an aside, I said to myself let's paint just one figure as those red-plumed fellows. Well I could not stop and here we are. I believe I enjoyed painting this cavalry unit more than any previous, I may even expand it to 12, but we will have to see. I have 8 more figures left from my second Perry box of heavy cavalry and they are slated to become the 1er Régiment de Cuirassiers. I have said it before, but I will say it again, these are first rate figures and I endorse them without reservation.
I believe I got most of the uniform and the horses right, although I do note that the plume on the helmet of the trumpeter in the above sketch is white, might change it after more research.
Read more »
Posted by john de terre neuve at 11:52 10 comments

I recently finished 3 stands of artillery to make up 2 batteries of British artillery. One stand is Front Rank and the other two are Perry. I must say I like the Perry figures more and more and they really lend themselves to my painting technique. I use GW Fenris Grey for the cannon carriages, maybe if I had my time back I would have gone with a more grey colour rather than blue, but these are fifth and sixth battery of British or allied artillery I have painted and I am not going to start again. The Perry figures are actually marketed as Hanoverian artillery (BH 12), but I do not believe there is any difference. 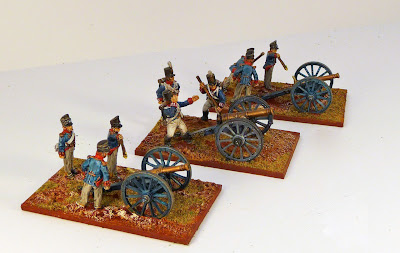 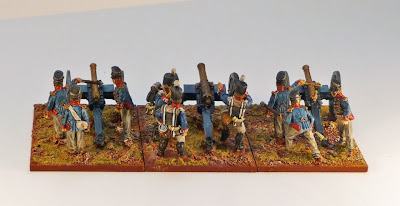 Hanoverian unit to the right and British to the left.

I actually plan to buy 2 Perry Howitzers (BH47) and make a second unit of Hanoverians, this time with a howitzer and 2 cannons each. 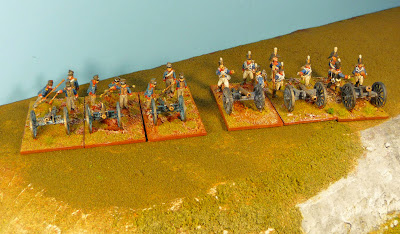 I believe I will add one further battery of RHA and try to stop there. My artillery for the my Anglo-Portuguese army will then include 1 battery of Portuguese FA (Redoubt), 2 batteries of RHA (1 Redoubt and 1 Perry), 3 batteries of British/Hanoverian (1 Front Rank and 2 Perry) and a battery of RHA Rocket Corps with 4 stands. I have one limber done and another ready to go and I also plan to paint up those nice Perry (BH 49) mounted Artillery commanders.


If anyone has a link to a nice print of British artillery please sent it on as I like to post a print at the beginning of each blog entry and I could not find one.

A couple of months ago on the Fighting Talk forum, I saw a post that offered some painted Dutch-Belgians for a minimal cost. Apparently a gamer had run out of room and wanted to get rid. I was quite interested as I am trying to build up my Waterloo armies, so I jumped. Unfortunately, I was late and someone else snapped them up.
The original poster, Dashing Blade, emailed me though and offered to give me a couple of battalions of French Infantry, of which he had no need! All he asked was that a make a donation to a military service fund. He then sent them at his own cost from the UK to the US. He was very guarded about who he was, although he admitted his name was Ian and I suspect he is from Lancashire.
I was able to get 3 French battalions from the lot with an addition of a few figures of my own. Dashing Blade had painted them in a campaign style, something that I never had attempted. Certainly his style was quite different than mine, but they are very nice indeed.
Well here they are re-based, I decided to flag them as battle weary 4e, 5e and 6e battalions. Here they are looking down the barrels of a battery of British artillery.

The chefs de batallion with the 4e and 5e were painted by me as well as six of the command and elite figures.

Look at those striped trousers!

Been a bit slow to post recently, but I have been busy. For my La Haye Sainte scenario, I needed a large Lasalle unit of British Heavies. My favorite part of the film Waterloo is when Wellington tells Uxbridge "now is the time for the heavy cavalry".

I thought a nice unit would be the Union brigade under the ill fated Ponsonby. 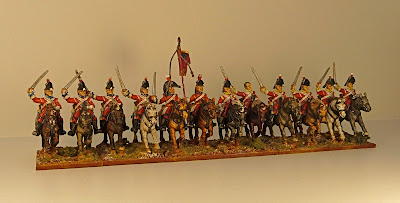 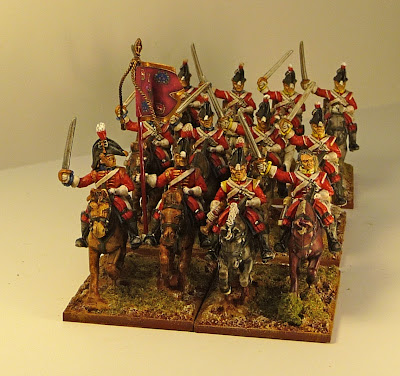 Lasalle requires 6 bases for a large cavalry unit, and I usually go with each base representing a squadron.  The Union Brigade was made up of 9 squadrons or around 1000 troopers at Waterloo, so her are 2 of the 3 regiments, I need to order the Northern British (Scots Greys) figures. These represent the 1st (Royals) and the 6th (Inniskillings) regiments.
I used the midtown AP here, I thought it would be better on the red than the black pigment. The horses were done with various Inks and Washes from Vallejo and Games Workshop. I like how the horses came out. 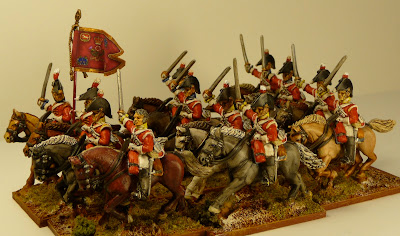 Information on the uniforms of the British cavalry can be found here. I know of course that British Heavy Dragoons wore helmets at Waterloo, but I wanted bicorns.......

About 4 months ago, I bought 16 Hungarian infantry off ebay. I am not sure of the painter's name, but I had bought a French infantry unit from him a couple of years ago because I really liked his painting style. The method I use now (white prime, thinned paints with dark wash) is based on what I learned from studying these figures. I had a plan to paint an Austrian Avant Garde Lasalle division, and needed some extra Hungarians (only had 24 figure battalion pack), so this seemed like a good opportunity to cut some painting time and get the unit done.
The unit came with green facings and a low porte attack pose. I am not wedded to painting specific battalions for my Avant Garde division, so that was ok with me as I had already painted a blue faced and had started a red faced German battalion. Red, blue and green, what more could you want! 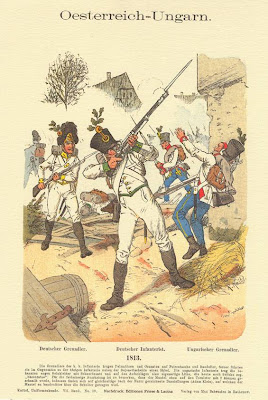 Green facings in a Hungarian infantry unit limited the choice to just 2 units, IR48 and IR62. Both had yellow buttons, I like yellow buttons. The specific facing colour is steel green.  The Clash of Empires website has a colour guide to Austrian facing colours, I used GW Knarloc Green which I believe to be a little light, but so be it. IR48 was called Vukassovich up to 1809 and Simbschen after this. 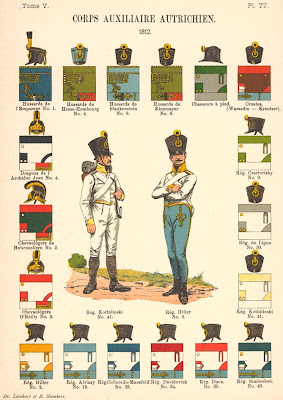 In line, great GMB flag. I painted 20 of the 36 figures all the rear rank as well as the officers on the right and left flanks. 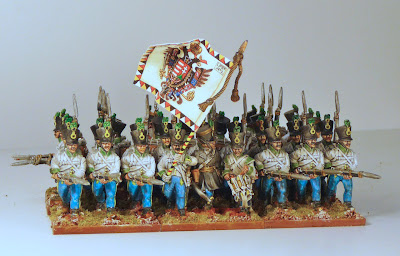 I alway make the left most base in my infantry battalions using two 40x20mm bases rather than one 40x40mm base. The rear rank is glued to the thin square base, but the front rank base is magnetised so it can be removed to mark casualties. You can see that I did a pretty good job of matching the style. 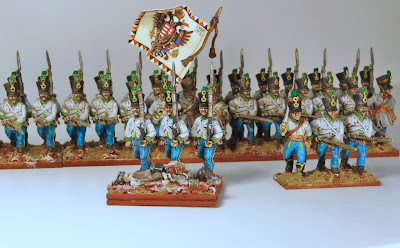 The darkest Army Painter was used, a matt varnish was applied and the white areas were dry brushed to bring out the white again.

The great problem with pointy bits sticking out from the base is that it is difficult to have a tight column of march. If you are using the Republic to Empire rules though this is fine as it is recommended that you leave a base sized gap between each base when figures are in column of march.

Well that leaves just two more 36 figure infantry battalions, one 12 figure cavalry regiment and one horse cavalry gun to do and the Avant Garde division will be done.