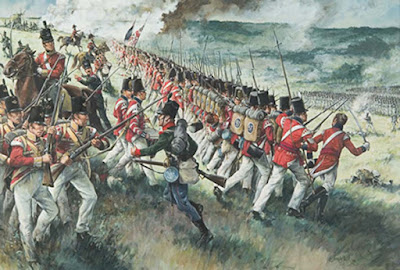 I thought I would see how GdA works with less then the recommended number of brigades, so I took the Vimeiro Hill scenario from the General de Brigade Scenario book #5. Here we have 3 brigades per side and the British only have 2 until turn 5.

Below we can see the hill in the farground with the 3 attacking French brigades in the foreground. Very little terrain is required so it is a simple terrain to set up. The scenario sets the game at 12 turns with the British having to break 3 French Brigades or alternately the French have to have units on Vimeiro Hill and break 2 British Brigades. The hill is a gentle slope so offered no impediment to movement. 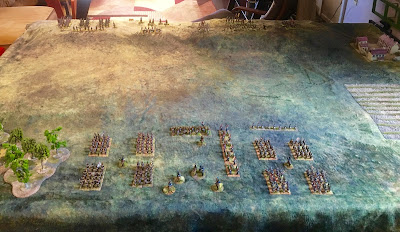 
So a great game, I hope to play this again at the Hobby Bunker tomorrow with Adam. I plan to add an ADC to each side. Playing solo is OK but a real opponent is better.

As you can probably tell I am really enjoying this set of rules.
Posted by john de terre neuve at 09:22 21 comments