A few more figures that I have painted from the Folklore The Affliction Kickstarter. Above is a somewhat questionable unboxing video which I believe is important rite of passage in the Board Gaming World!

Almost two years ago I backed a Kickstarter for Folklore-The Affliction. I am not sure why except perhaps it was by a local company in Marlborough, MA. I forgot about it then, the pledge was $95 and I looked at it as support for the local gaming industry. I really had little interest in fantasy boardgaming, I had not even played Dungeons and Dragons in past. I think the last boardgame I played was Risk maybe 40 years ago.

I did get regular email updates and about 2 weeks ago a large box showed up on my doorstep. It contained the basic game as well as another box containing an expansion set as well as some extra figures. I have to say I was shocked with the quality of contents as well as the figures. There were multiple pieces including many cards, punch out counters, a gaming board and almost a 100 figures. The quality of the game components and the figures were really first class. The board and card art was amazing. The figures came assembled and based and were of hard plastic, I suppose one would call them heroic 28mm. They were all beautifully sculpted and well cast. And aside from the faces on the human characters which were somewhat soft, they are very easy to paint...........yes I just could not resist giving them ago.
The game itself is a fantasy romp through a world inhabited by both minor evil beings and animals as well as the Afflictions, the major adversaries. The game is for 2-5 players and each player assumes the persona of one of 12 characters who travel through the world following a pre-written storyline. The depth of the story telling is quite impressive and easily played solo. The characters have to act cooperatively in order to make it through their travels. Each chapter takes about 60-90 minutes and the play is quite engrossing with simple gaming mechanics. Although the story is scripted the number of branch points is impressive and the combat mechanism is quite simple and fun. The characters of course grow in ability and strength as they progress through the story. I know this is old hat to most of you but the whole thing was quite novel to me. 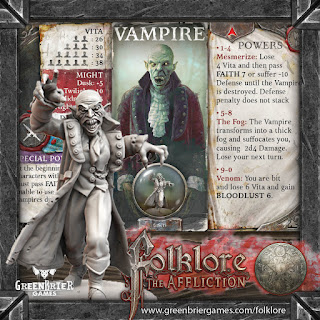 It was so novel that that I could not resist setting up the game and having a solo run through it. A lot of fun indeed. Two of my sisters happened to be visiting last week and I played a couple of chapters with them and they also quite enjoyed it. Now all that is left is to convince my wife to have a go......she says maybe!

Anyone this has been a lot of fun and I will look forward to painting more of the figures in the box, at least 80 more to go as well as some Afflictions.

On the gaming front, I am working on a massive new project which is going quite well and hope to have a post up soon with some photos.