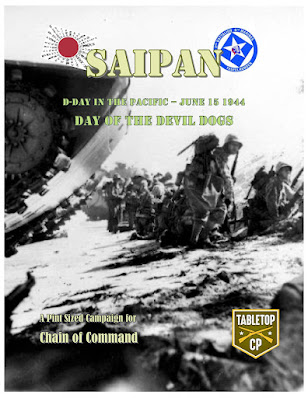 Last night, Pierre-Yves and myself started our 4th Chain of Command campaign but our first in the Pacific/Far East theatre. I have been the attacker in our last 2 campaigns (Bloody Bucket, Gembloux Gap) so it was good that P-Y picked the USMC who are of course the attackers in this campaign in the Marianna Islands. The campaign is free available for download here. You can also watch the campaign being played out on Tabletop CP.
P-Y is hosting this campaign in Montreal, I joined by Zoom from Salem and as usual we were joined by our intrepid but tired friends Janne and Eero in Finland, if I have it right it was 0200h in Finland when the game started.
I had put a bit of time thinking about how I was going to defend against the USMC (I have to admit I forgot how overpowering American platoon can be in CoC with their BAR's and their re-rolls). The first table in the campaign is a bespoke Beach Assault scenario, I thought it was quite well thought out with the USMC suffering shock (1d6 per squad) and casualties (1 d3 per squad) as they deploy on the beach under a Pregame Barrage. They do have a lot of support though and can arrive in APC's. The Japanese have several fixed defences and also suffer shock (1d6 per squad in the 1st turn). The following photo show my pre-game defensive plan...... 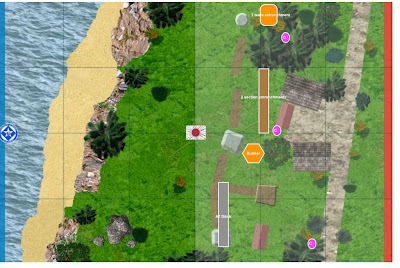 ......and as you can see from the Patrol Ap result it came out pretty well as planned in respect to the JOP's (pink). 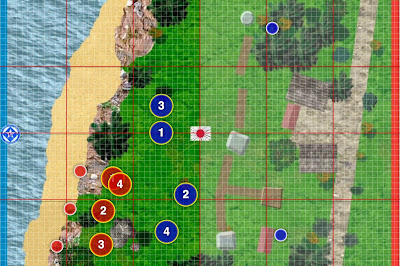 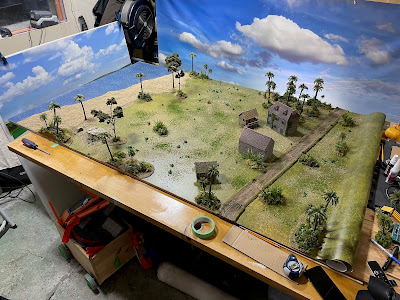 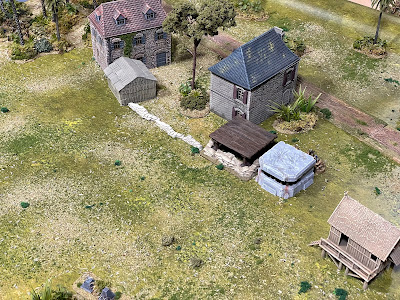 Anyway on to the set up:
USMC (FM 9 (+2 on FM roll)
6th Marine Regiment
Type F USMC Platoon
2SL
3 Infantry Squads with JL and 12 men
Supports (19)
Red Dice (2)
Pregame Barrage (2)
FO (5)
LVT(A)-4 75mm Howitzer (4)
? (6)
Japanese (FM 9) (+2 on FM roll)
136th Infantry Regiment
Type B Infantry Platoon #1
2 SL
3 Infantry Sections with Jl and 12 men
Grenadier Section with JL and 12 men and 3 50mm Mortars
Supports (8)
3.7 Type 94 ATG (3)
7.5 Type 1 Field Gun (5)
So on to the game:
My plan was quite straight forward, I was quite focused on taking out any AFV's so I took as good as AP weapons as I could find combined with good HE ability, thus the 2 guns. I also had added HE with my grenadier squad. I believe these were probably good choices but I am not sure if my deployment plan was the best. Should I deploy early so I was on overwatch when the Marines deployed or should I wait until they got close and fired and engaged in combat. As it was I could deploy 2/3 of my force in Hard Cover so I opted for early deployment. Waiting might have been a better option as the Marines had to get 2 units off the table to win the game, this seemed like a challenge and I had to remember that they have 3 team squads and units can equate to a team in CoC.
It is always a challenge to have 5 CD and you are facing a force with 6 CD, and this really came up in this battle. The Marines had the initiative and deployed the LVT(A)-4, this was good as it only has an armour of 2 so I deployed my 2 guns. They did take quite a bit of shock coming on, but were able to get reduce it pretty quickly and they were successful it stopping the APC. 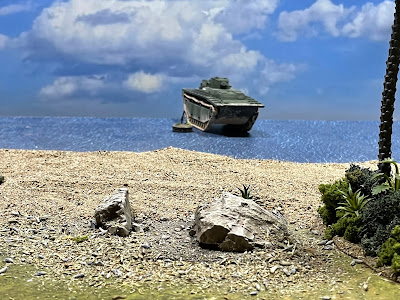 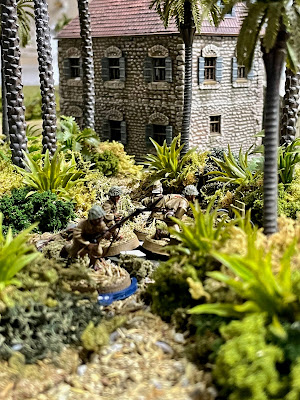 ,
By now, however, the Marines had deployed 2 squads on the beach and with 3 BAR's per squad and re-rolling 1's they made fairly short work of the 3.7 cm ATG, killing the crew and causing the JL to abandon the gun. 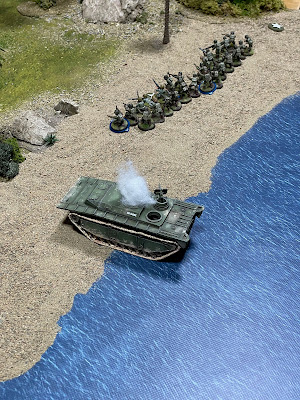 To take on these 2 squads, I brought on my grenadier squad, I had planned to bring on at least 1 more infantry squad as I had rolled two 2's and two 3's but the PGB prevented them all deploying. They were entrenched but 1 squad facing 2 marine squads was not going to go well as I soon found out. 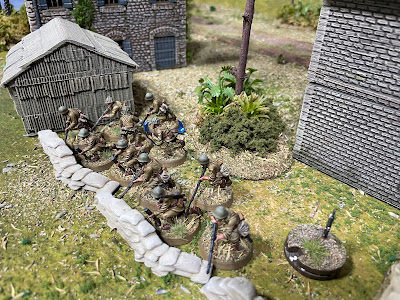 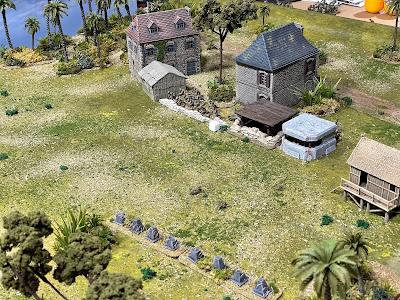 P-Y brings on a FO and before I know it a barrage is sitting on top of my entrenchment and bunker, the Japanese try to hold up, but P-Y's  dice are excellent and mine are abysmal. I believe he had 3-4 double phases, I had none. 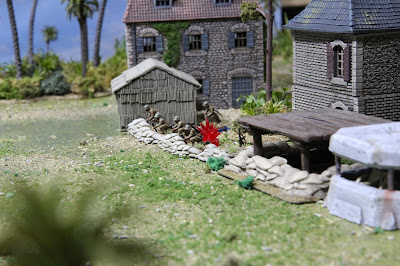 I could have pulled back my troops (we use TT"s modified barrage rules that allow movement and firing while under a barrage) but by now it just seemed that it would be a drawn out affair so I withdrew to fight another day. Well played by the marines!