Lee over at Napoleonic Wargames Project has asked me a couple of times how different manufacturers of Cavalry and Artillery compare. I finally had a chance today to take a few snaps, sorry I do not have fancy calibrated back drops, but I believe a sense of the figure size is more important than actual sizes.
I am not as picky as some and I actually like having different manufacturers in my armies, my infantry units have figures from 6 different manufacturers and I am happy in my own way with them all. I find that it is difficult to mix different manufacturers in the same battalion, but in respect to command figures you sometimes have to do this. I also generally like to use the same manufacturer in the same brigade when wargaming, but this is not really for the look, but more a question of easy identification, ie. the Foundry's are the conscript's etc. etc.
Recently Lee has asked me about both artillery and cavalry, he had an attack of the "wobbles" over the Victrix Plastic artillery, and I think I can understand why. The cannon carriages are really quite diminutive, I really can not comment on the figures. Fortunately he seems to have got over it and he recently has done some great work.
Anyway back to the point of the post. I do not have all the manufacturers but I do have some and have taken some photos. Here are some cavalry, I believe that these are all pretty similar in size, aside from the Foundry, which are definitely smaller. I would not mix the other figures in the same unit, but I believe they would be fine in the same brigade. In respect to the Foundry cavalry, I have 2 units and a 3rd unit to paint for Lepic's Imperial Guard Cavalry brigade to add to 2 regiments of Front Rank cavalry. It was clearly a mistake to do it this way and I would avoid using Foundry cavalry unless you plan to do your whole army in Foundry (Front Rank infantry seem to tower over Foundry cavalry). Nothing wrong with Foundry figures, but they do not mix well with some other manufacturers.

The Perry plastic dragoons are to be fine in comparison to the Front Rank, but I would not mix them in the same regiment.

In respect to artillery, the Perry are a little smaller, but again I am happy to have them both in the same army. I would not mix them in the same battery, but otherwise the sense of size is fine.

The overview is more valuable in respect to artillery, unfortunately I am not too sure about the actual sizes of the cannon. I believe the Perry are BH 12 (6pd Hanoverian/British) but can not remember if the Front Rank are 6 or 9 pd. The Austrian gun is a 6pder and the Calpe is also a 6pder. 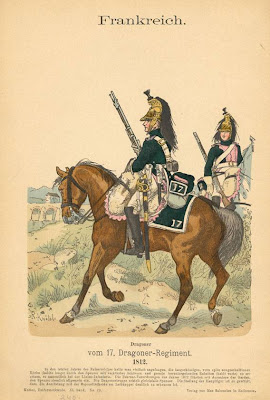 In between painting my Austrian units and to break things up I have been painting various units to fill in the holes of my other armies. I need 4 regiments of French Dragoons for the Lasalle Reserve Dragoon Brigade.
Here is the first regiment, the 15e régiment dragoons. I picked them as they have pink facings, who could resist the combination of pink and green. I am trying to stick with historical OB's, and am using Montbrun's cavalry reserve at the battle of Fuentes de Oñoro in 1811 as the basis for my choices. I have already painted the 6e régiment (Front Rank) with their scarlet facings. I plan to paint the 25e (orange facings) and the 11e (crimson facings). I am still undecided about the last unit, as there were no yellow faced units in the division, but I may be still tempted.
These are Perry plastics and of course are the later uniforms (post 1812), but that really does not bother me that much. These are nice figures and because of their relative cost I will continue to use them for all 3 units in this brigade. They are not as nice as the Front Rank, the models are less defined and I overdid it with the primer on a couple of the figures. They are pretty nice, however, and are a welcome addition to my French forces. 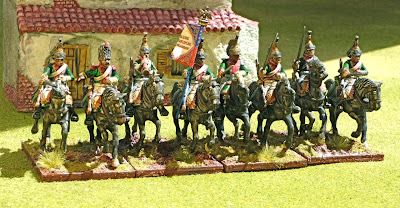 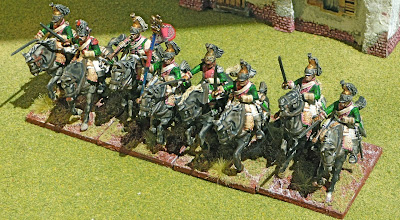 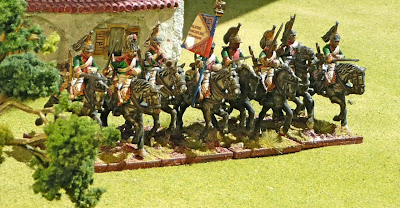 The standard bearer is not the correct figure from the package, but one made up from 1 of the troopers. The box, I bought, was missing the command sprue. Subsequently, a very kind wargamer from Kentucky sent me the missing sprue, thus the commander is correct. 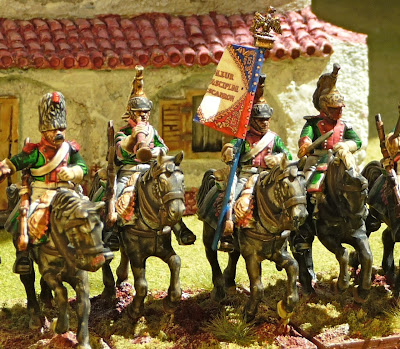 After the errors I made with the uniforms on my Austrian Infantry (I have updated the photos with the corrections in my previous blogpost); I thought it would be prudent to do a paint trial for my first units of Grenzers.
These are the painted as the 1/13th Wallachisch-Illyriches Grenz. It is thought that by 1809 the 13th had converted to the brown uniform coat, they had light pike grey facings with grey buttons. Their trousers were sky blue. It appears that the Grenz could have either white or black leather work and straps. I also found an intriguing reference to red cloaks.
So here is my test paint job, I believe I have been generally accurate, aside from the use of yellow rather than grey buttons. I think the blue could have been a little more sky in shade, but I will continue with this scheme for this unit. So white prime; P3 brown ink; Citadel enchanted blue, drybrushed with Citadel ice blue; Citadel astronomicon grey facings; followed by Army Painter Softtone and some Testor's Dullcote

and the backs. Could not resist the red cloaks, and I have noticed that the Austrian expert Archiduc Charles has gone with the same.

I am quite happy with the results and look forward to painting the 36 figure regiment.

I have decided to go with the 1/7th Brooder Grenz (6th Korps at Wagram) for the second Grenz unit in my Lasalle Avantgarde Core unit. I like variability in my units and it is thought that the 7th were still wearing white coatees in 1809, with pale red facings and white buttons. I plan to use Citadel ice blue for the trousers and will probably paint them with black straps to make them more distinguishable from Hungarian infantry. Well that is the plan anyway unless I hear strong objections.
The dreaded close up of the paintjob! 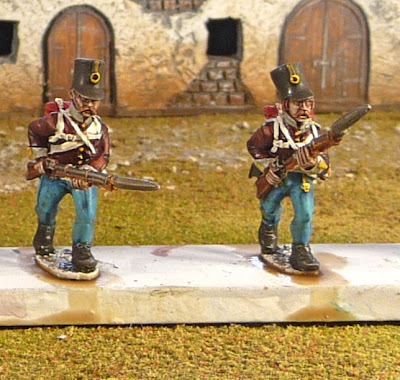 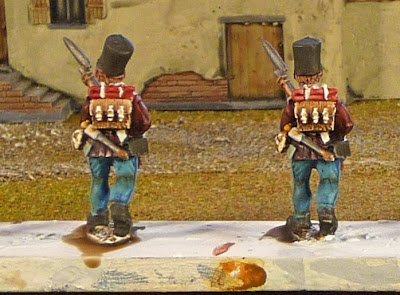