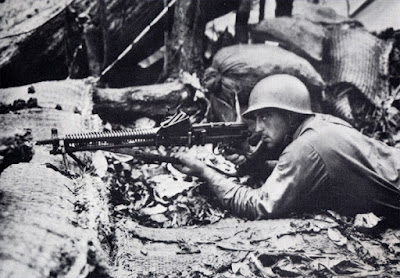 I have to admit that I never thought I would be researching the USMC, but over the last several days I have been doing exactly that. My son has played a couple of games of CoC with me recently and expressed interest in gaming the Solomon's campaign in the Pacific. This campaign was not covered in the basic CoC army lists nor has there been a player generated list for this period. There was one list for 1944-45 period but the USMC platoon organisation changed from a Type D to Type E in mid 1943, so this was not really accurate. There is an official list for the Japanese in the Far East in 1941-42 which contains the Type B organisation which will work for the Solomon's campaign. I have to admit it was quite interesting to read about this period and I think it will make for some excellent gaming.

Update: Here is the final version which has undergone extensive changes since first uploaded on September 16.

Update 2: After review by Rich Clarke from TFL, the crew for a BAR was changed to one man rather then 2. 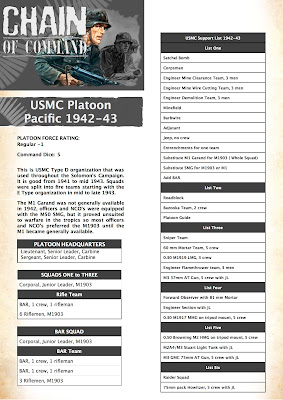 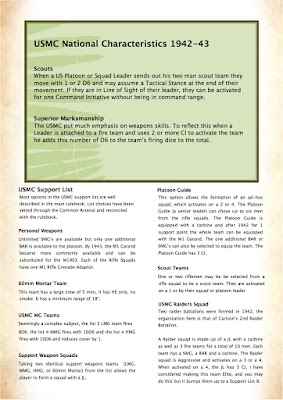 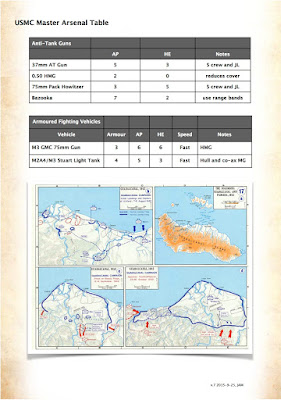 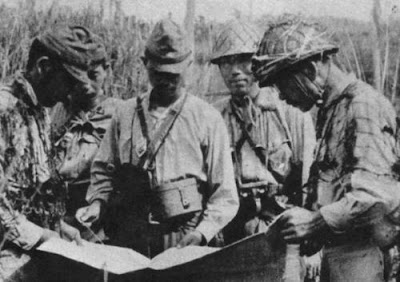 I finally got around to taking some photos of some WWII armour I painted over the summer. They are all 1/72 in plastic except one vehicle which is resin. As campaigns for Chain of Command appear, more vehicles are always required, but my impetus for painting most of these AFV's was this blog post on Wargaming with Silver Whistle. The post describes a slight variation on Chain of Command with essentially all armour forces. I was immediately attracted as I felt it was a great way to tune up on the AFV rules in CoC and to paint some vehicles that I would not usually need. It is well worth looking at this blog just for the terrain which is really the best I have seen. It was a struggle to find some of the vehicles in 1/72 but I did manage.