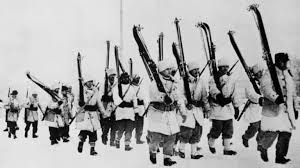 I got together with Tom yesterday to get in another test of Striking Back, an Armoured versus Infantry encounter set during the Battle of the Raate Road in January of 1940. This is the third test now with 3 different experienced CoC players; and the scenario seems to work well. For this third version, I made some minor modifications to the terrain set up, mostly to make it a little simpler. You can find the latest version with the rest of my Winter War campaign material here in my Google Drive.

I played the Soviets this time, which was good, I had previously played the Finns twice and in this game I really wanted to focus on the CoC Roadblock rules to see how they would work in the scenario. We have had a lot of discussion on the TFL forum about Finnish Roadblocks and I had decided to go with the rules as written.

Clearing Roadblocks
A Roadblock may be cleared by an Engineer or Pioneer demolition Team. They are equipped with sufficient charges to destroy a single roadblock in a game. To do this they must spend two Phases in which they are activated adjacent to the roadblock during which time they must not lose any members killed or have any Shock inflicted. They must retire at least 9” in order to detonate the charge safely, which requires one further Phase activated. On a roll of 4 to 6 on a D6 they can declare the roadblock destroyed, after which vehicles may pass without hindrance. On a roll of 2 or 3 the road block is partially destroyed and vehicles may pass it but at slow speed only.

As you can see this is a pretty tough requirement and although I like winning, I was more focussed on destroying the Roadblock if indeed Tom selected one as a support. I was curious how the process worked.

Soviets (Starting FM of 8)
As laid out in the scenario, no additional supports


The game commenced with the Soviets going first. The Finns were not able to advance their JOP's that far up the table.
Well it was a good game, with the Finns winning with a FM of 5 to the Soviet's FM of 1. All three games have worked well with none of the experienced CoC players offering any major criticisms. All games were close with the Soviets winning the first time around, the second game was very close with a intial Soviet win but a major error was made at the end with the Finnish SL taking a FM test which he should not have taken at a time when both sides FM was 4. Our game above was a good victory for the Soviets.

I certainly made a few errors and Tom played an excellent game, holding back his Finns until he had a good advantage and then disappearing back into the forest. The Soviet player does have a pretty tough time advancing his AFV's up the road. Having a KOed tank blocking the road right at the road block was a major error as it blocked the LOS for the rest of my armour. It also stopped me from giving good covering fire to the demolition squad when it attempted to blow the Roadblock. I have to say though I think it is almost a futile task for the Soviets to take out this road block.

I think I may modify the scenario to give the Soviets an option to take another Rifle squad rather than the Engineering squad but I will give it a bit more thought. I really do not want to enlarge the game as it is already quite big.
Posted by john de terre neuve at 08:27 7 comments 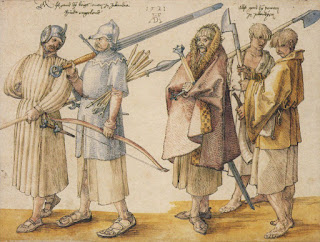 In respect to the scenario, it was not as good as the last one from MSB, we could have easily went on for hours as there was no turn limits or slaughtering points. The only way one could win is my killing the Warlord and it would have been very easy to play defensively.  Clearly we decided not to!
Posted by john de terre neuve at 08:07 4 comments 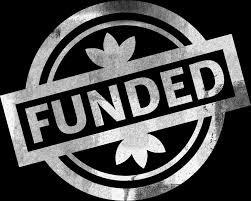 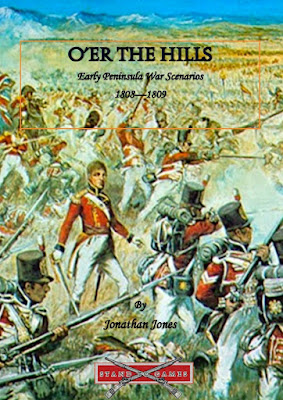 There is a little more then a week to go for the O'er the Hills Early Peninsula War Scenarios Kickstarter.  Eleven days and a little less than $300 in pledges is needed to make this a reality.

I suspect most of my readers are familar with JJ's Wargames blog by Mr Jonathan Jones, this is really a superb site with beautiful photographs of many excellent Action Reports of Napoleonic miniature wargames. The blog is also an excellent resource for all things Napoloeonic, but especially for the Spanish Armies of the era.

Jonathan has put this book together with the people who wrote the O'er the Hills Napoleonic ruleset and I suspect it will be an excellent reference for putting together games for the Peninsular Wars. I actually do not even use this ruleset but feel confident that these scenarios will be easily ported to Général d'Armée, my chosen ruleset. As an encouragement to pledge, JJ has just announced that all backers with get a free pdf of  2 extra battles with an additional early Portuguese list.

The fall is here so time to get the brushes out again. Over the last 6 weeks I have been working on several projects, finally got a chance to do some photography today. I had not really realised it but what I have done is in 4 different scales. 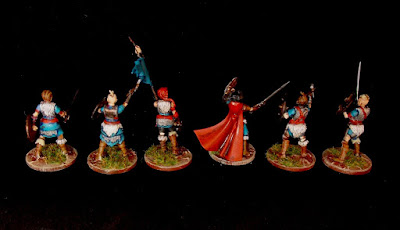 It was good to starting painting again, as I have to warm up for the IX AHPC! A new force has been ordered.
Posted by john de terre neuve at 11:50 4 comments 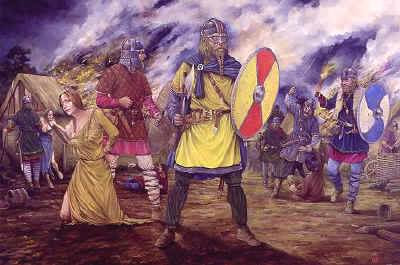 Myself and Adam finally got a game of SAGA in last week. It is the first we had played for a while. We are now playing SAGA2, which we both believe is an improvement over the original set. Unfortunately it was a bit of a difficult game as our knowledge of the rules were quite rusty and many mistakes were made.

It has been a bit of a challenge to find scenarios that are designed for SAGA2 as we are still waiting for the Book of Battles to be released. There is only one official scenario released so far and that is in the main rulebook. I think we have already played in twice, so something new was needed. Fortunately a SAGA player has released a series of unofficial scenarios which can be found in a link on the Studio Tomahawk English Forum.

After a look through, I decided that the Sacred Forest scenario looked interesting, you can download this specific scenario here. It was quite a good scenario and I can recommend it. We went with 6 point  warbands.

Adam arranged his warband so that he had 6 SAGA dice to start and mine were arranged to generate 7 dice. Victory Points were given and the start of each players turn if he had more units in the forest than his opponent. A Victory point was also awarded at the end of the game for each unit that was destroyed and 3 Victory points were awarded if you killed your opponent's Warlord. The game was 6 turns but could be extended on a dice throw after the sixth turn.

I took a few photos at the beginning of the game which went 7 turns and lasted about 3 hours. This is a little long for us but the game was marked by much debate about the rules. The scenario is actually quite good and I commend the author. We originally gave the victory to the Irish by 9 to 7, but in retrospect it was cleared that the Brian Boru would have been killed in the 6th turn if the rules had been properly applied, giving a victory to the Vikings by at least 10 to 9. 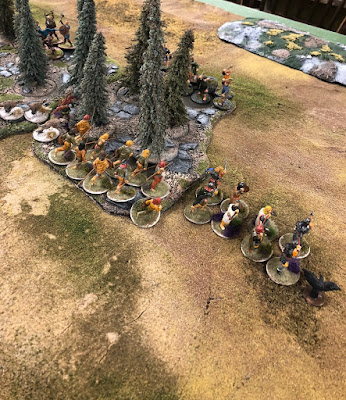 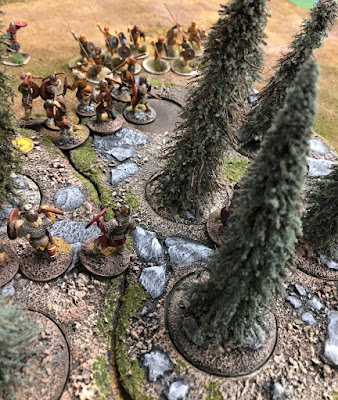 You can find an AR with more photos on Adams blog. I spend a lot of time going over the rules after the game as I felt that several of them had been mis-interpreted. I find it best to read through the whole book, which is easy enough as it is quite short. Relying on reading one sentence in the book is rarely helpful as a sentence has to be interpreted in the context of where it is found. Here is a list of the misinterpretations and clarifications of the ruleset that I discovered. I confirmed them by asking question of the SAGA Forum.

Movement:
No limitation on movement in respect to other figures friendly or enemy
You can not slow movement to VS by taking a fatique in difficult terrain.
Shooting:
The attacker can not use the enemy’s fatique to reduce armour, the defender can use his enemy's fatigue to increase armour.
Exhaustion:
An exhausted unit can only rest, this includes using any SAGA activation abilities.
If a unit that starts a melee exhausted it remains exhausted (-1 on attack dice) even if opponent uses it's fatigue during the melee process.
Resilience:
You can not use resilience when the Warlord is exhausted.