Jean Gabriel Marchand the general de division. Here represented by a Front Rank figure with a Redoubt ADC in blue.

Brigade Chemineau comprising the 39e ligne (1190 men). A small regiment with a mixture of Perry plastics and Elite command figures, although 3 battalions where at the Battle of Fuentes de Oñorno, I have represented with just 2 here. These figures are just off the painting table, maybe a little sloppy but since this was the last unit in the 6th Corps to be painted, I was getting a little fed up. 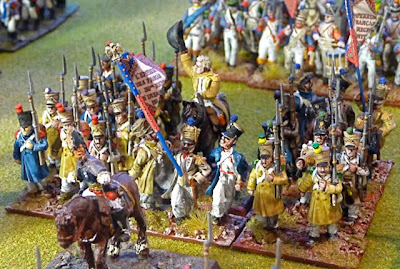 and 76e ligne (1290 men). Ditto as above in respect to figures, painted about 6 months ago. General de Brigade Chemineau is a Redoubt figure (say it again, avoid these figures). 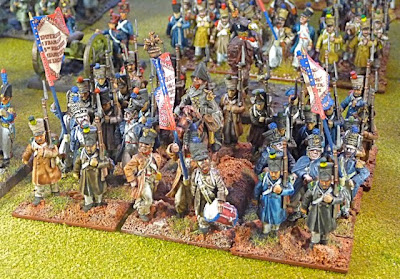 Brigade Maucune with 69e ligne (1590 men). Foundry figures painted a couple of years ago, thank god we all can learn. General de Brigade Antoine Maucune is a Front Rank figure. 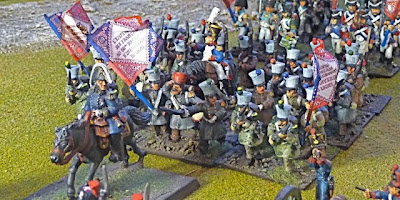 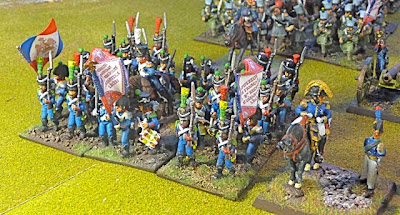 The 2e Division was led General Mermet. The numbers listed are the number of men fielded at the Battle of Fuentes de Oñoro in May 1811. Three quarters of the unit is comprised of Foundry figures. General Mermet's stand has a Front Rank figure representing the General and a Redoubt figure the ADC, it will be eventually replaced by Perry. The Redoubts are nasty little figures, but it is what I had at hand when I did the stand.

The generals de brigade are a Front Rank on the left and another Redoubt on the right, also to be replaced by a Perry figure in the future.

Brigade Ménard:
1e,2e,4e/25e Régiment Légere (1870 men), these are Foundry figures painted about 2 months ago well described in a previous post. 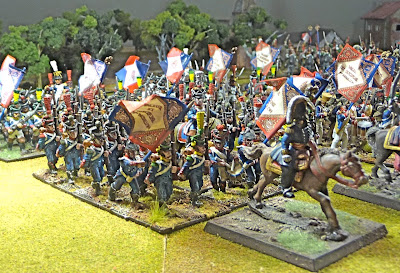 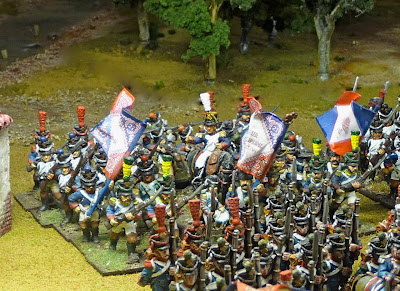 Brigade Taupin:
1e,2e,4e/50e Regiment de ligne (1410 men). These are of course Victrix. Occasionally I buy painted figures and about 2/3 of this unit was done by Martin Evans. His whites are absolutely stunning as you can see below. My figures of course are the undifferentiated whites, but otherwise I feel they came out well. I still had problems getting the arms glued on straight. 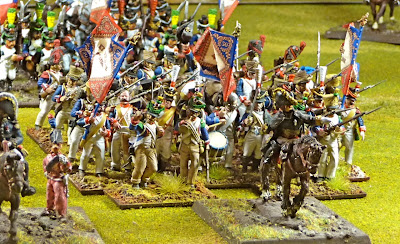 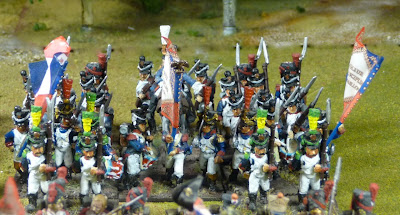 Well it has been quite a long journey, almost 3 years when I decided to paint a corps each of British and French for this battle. I have 2 more French and 2 more British battalions to paint to complete the goal I had set for myself at the time. I will be happy to move on to some different armies, but I feel I have learned a lot about painting.
(12900)
Posted by john de terre neuve at 16:47 6 comments

It has been a long time since my last post. Xmas was busy with visitors, work and well Xmas. Just after the New Year, I was able to start on a new battalion. I had been planning to finish off the French infantry for the VI Corps in the Army of Portugal, but I was getting tired of blue. This box had been sitting around for a while so I thought I would give it a go. I needed some KGL line to finish off Wellington's 1st division in his Army of Portugal. These 4 battalions are a bit of a challenge as they were quite small, with a total of 1800 men all told. I decided to base these 40 figures as 2 large Lasalle units of 6 bases each, this is pretty close to a figure ratio of 1 figure to 40 men.
The figures were quite easy to assemble and of course were primed white. Ninety percent of each figure was done using washes (both GW and Foundry), only the metal and the facings were done with acrylic paints. Two coats of wash were done at the most, so they were painted quite rapidly, I would say 30 minutes for each figure including basing. I am quite pleased with result. These are very nice figures, I was able to fit 3 on a 40x20 mm base without too much problem. They will be my British line figures of choice from henceforth.
I present them here as the 34 figure 1st Battalion KGL line. The large battalions do look nice, but I would be painting forever to build corps where the battalions are this size. I am thinking about scaling back to divisions, but more about that at another time. 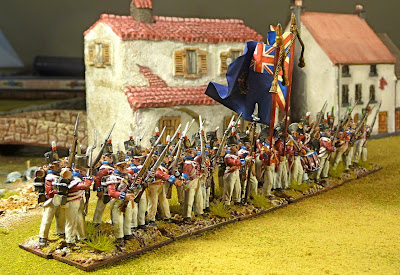 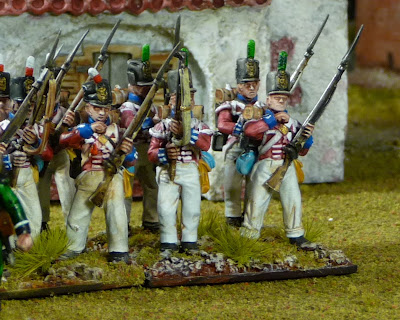 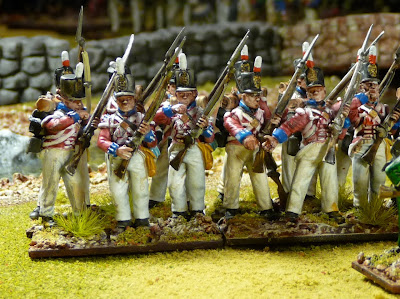 Two companies of Light KGL deployed as skirmishers. I again used a GW wash, maybe a little "bright green" in the photo. They do look good on the table. 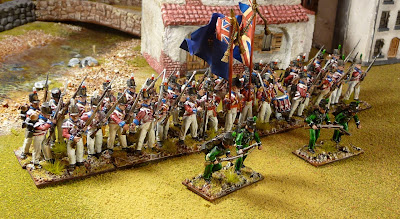 I plan to break this unit in 2 as noted above and add a 40x40 mm command stand with a mounted Colonel, a second ensign and another drummer. These are already done with Front Rank figures, I cut the heads off (they had belgic shakos) and glued on some excess heads from the box. Maybe very slightly microcephalic looking, but I do not believe that anyone would notice unless told.
(12600)
Posted by john de terre neuve at 09:51 5 comments