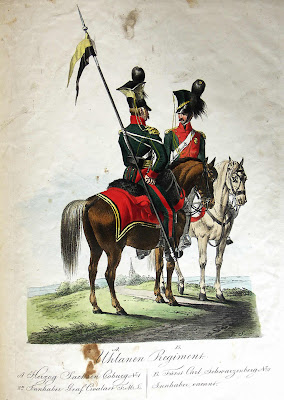 For my Lasalle Avant Garde Division, I needed a large cavalry unit of Uhlans (Lancers), the only unit I could find that were at the Battle of Wagram were the 2nd (Schwarzenberg), but I could not resist the 3rd, as they had distinctive red czapkas.

These are Front Rank figures and as usual they are quite good. The figures were pretty detailed, but I did enjoy painting them. I used GW Dark Angels Green Ink as the basis for the uniform. This was the first time I used a green ink and I was very happy with the result. Single coat over a white primer great two tone result. I used the mid tone AP on the figures and the light tone AP on the horses.

Here are the command stands, I could find no information on the trumpeter, so I decided to put him on an alternate coloured horse and paint his lapels and cuffs yellow. Also went ahead and attempted my first striped flag pole, needs a bit more work, but ok for first go. The flag and pennants are from GMB, the pennant have been heavily overpainted. 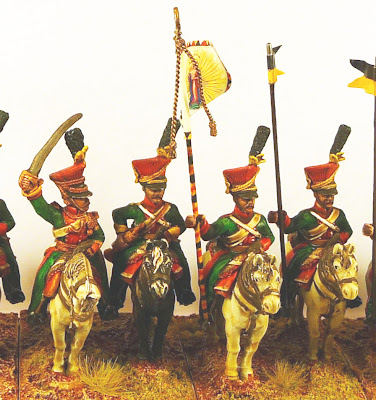 Side view, some day I will make an attempt to paint on a regimental mark on the saddle cloth, but not today. 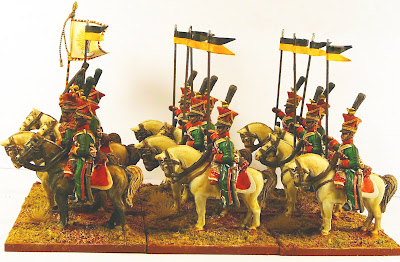 This ended up as a very bloody game, with very few units left by the end of the game. I played over several days, but probably less than 5 hours in total. It was the first scenario that I have played that was designed by someone else and I can now say that I am quite conversant with the rules. I seldom had to refer to the book by the 4-5th turn and by the end I seldom needed the QRS sheets. It was fun and I highly can recommend the scenario.
Starting positions:
To the southwest of the Inn.
To the west of the Inn on the other side of the river.
To the northwest of the Inn.
To the southeast of the Inn.
The Advance begins:
Goodenot's and Mallory's Brigades advance to join battle. 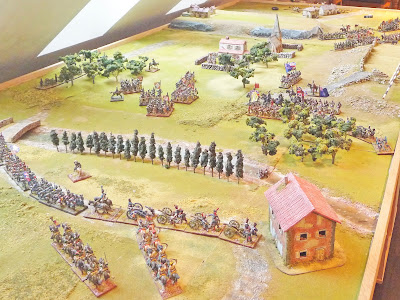 What appears to be the main area of engagement, just to the west of the Inn. Goodenot has sent divisional artillery and one veteran infantry battalion to the north of the Inn under the control of his commander, Géneral de Division Lorell. Bardet's brigade advances to the bridge. Lorell has ordered his 2 cavalry brigades to join him post haste. 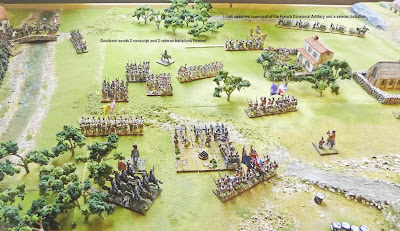 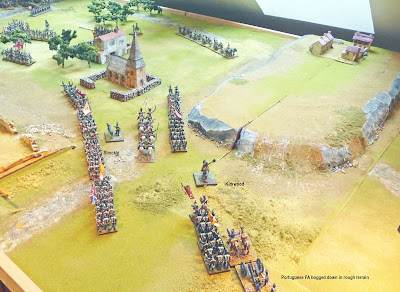 The forces are engaged, with 4 battalions of Goodenot's bde, taking on 2 British brigades. The 26e ligne are sniping from under cover at the flanks of Shockley's bde. 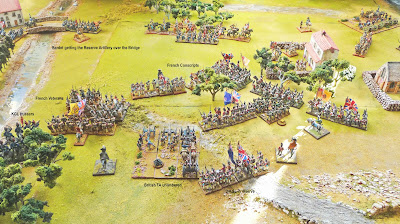 Where are the Portuguese FA, rough terrain really holds up artillery trains!

MIdgame, heavy losses all around:
The 1st Caçadores charge the French artillery, they have no refuge! 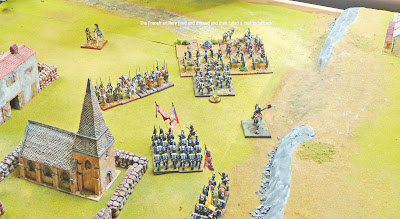 We are now in turn 6, and the losses have been quite heavy, both sides have lost an artillery unit, absolutely poor dice and poor planning! An absolute melee is taking place west of the Inn. Even the South Essex are engaged, will Simmerson stand? The French and Portuguese artillery are charging each other. Loses now include the French Divisional Artillery, the British RA, 39e ligne, 66e ligne

Continued heavy losses all around. The 95th have broken after continued fire from the Inn. The 2/52nd are broken by the 1/25e légere and the South Essex fail to stand, Simmerson is seen fleeing the field in ignominy. The KGL Hussars have been continually thrown back and have fled to the forest to regroup. 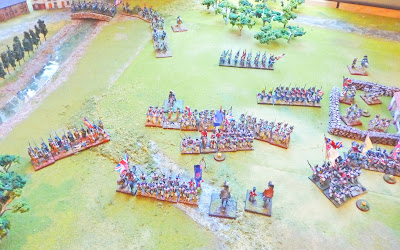 The French cavalry have been also quite unsuccessful, and just can not defeat the Portuguese foot and horse. The 9th Portuguese line ascends the hill. Finally the Portuguese FA get through the rough terrain. 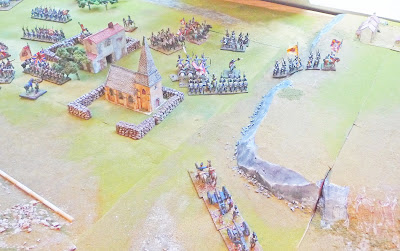 The French cavalry continue their attacks, but are continuously repulsed. 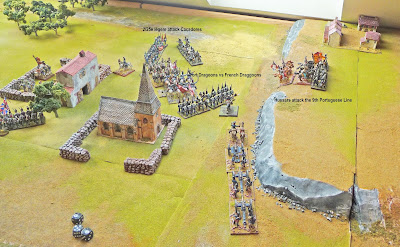 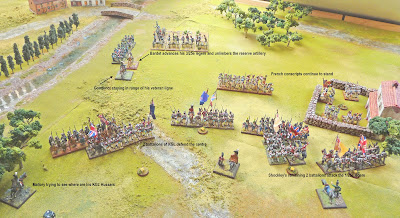 The end game:
Now approaching turn 13, scenario allows for 14 turns, both commander need to think about Victory Points, and the British are rapidly approaching a Morale Check because of their losses.
Lorell pulls back is cavalry in an attempt to rally them, repeated charges have decimated their ranks. The légere make an attempt to decimate the caçadores. Kirkwood has gained the hill to the east of the Inn, he sends the 8th Portuguese foot to take the church.

The British defensive lines are decimated, the KGL Hussars finally attempt a charge, perhaps to late. Clowes has lost the 2/52 and both the 1/52 and the 71st have 3 DISR each, he decides to pull back the remaining KGL infantry and secure the hill south of the Inn before nightfall. Goodenot although losing 3 of his veteran battalions and 1 of his conscripts continues to hold the Inn. Clearly his tactical skill and vigorous style have helped. 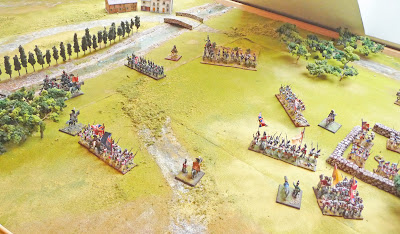 The KGL gain the hill, but the 1/52 and the 1st Caçadores have broken, the British have met their break point. 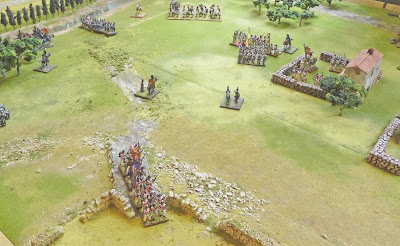 The French Hussars dispute Portuguese possession of the eastern hill. Turn 17 ends, the British fail their morale test. They lose. The final dispositions of the surviving troops:

The British have lost 8 of their 11 infantry battalions, 1 of their 2 cavalry regiments and artillery batteries. The French have lost 5 of their 9 infantry battalions and 1 of their 2 artillery batteries. The British hold the southern hill, while the French hold the bridge and the Inn. The eastern hill and the church yard remain disputed. A clear French victory.
Général de Division Lorell discusses his victory with his ADC. 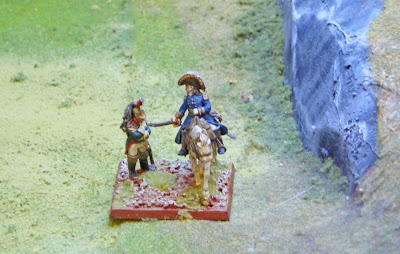 Getting a little bored of painting, so I felt it was time to have another game. I had a search about, I was thinking about doing one of Charles Grant's Table Top Teasers but settled on this scenario which I found on the Scenarios Wiki on the Honour website.
I have stuck to Faron's scenario "No Room at the Inn" aside from some minor terrain details, starting positions of brigades, the units in the OB and of course I had to change the name slightly. I did keep to all the original ratings and have stuck to a 9x5' terrain.
I play solo, so I will append my solo variation rules below. I decided that I would not use blinds or spotting in this scenario as I believe this would detract from the intent of Faron's scenario.
Here is a link to Faron's original AAR.
No Room at the Inn by Faron Bell (changes in red)
early 1809
Background: As Soult’s French Forces invade Portugal, the Spanish-Portugal Border is in turmoil. Innocent civilians flee for their lives as the French plunder the border villages for food and supplies. Shortly before dawn, two opposing advance divisions find each other marching towards a vital crossroads near the border. Lorell’s French Division is made up of a mix of conscripts, veteran and elite allied troops. They have the advantage of position with a Battalion of conscripts having reached the crossroads and taking up positions in and around a country inn. Lorell’s command structure is overburdened and lacks cohesion due to recently being re-organized. Clowes’ British/Portuguese Division is made up of solid troops, though the Portuguese Line Regiments are fatigued from marching all night. Clowes is a good commander, has capable subordinates and has a slight advantage in overall quality, especially with his extra light infantry skirmishers.
Objectives:
Vital supplies and munitions are stored within the Church and are of great value to the French. The Inn and Hills are also points of interest for both sides as they serve to dominate the approaches to the crossroads. Flanking the battlefield by securing the bridge and, thus, access to the river is also desirable.
Set Up: French set up first inside their deployment zones. They hold the Inn at game start and may deploy a battalion from Goodenot's brigade within the Inn square. After the French deploy, the British set up inside their deployment zones. The British Move First.
Special Notes: (1) British may use the superior commander rule. (2) A unit crossing the bridge must be in march column to move across it. (3) The river is impassable. (4) The Inn and Church built up areas offer soft cover. (5) The 2 hills (both 1 level higher) can only be climbed through their access points and the movement rate is as through normal terrain. (6) There are multiple area as indicated on the terrain as "rough" and these and the two wooded area half the movement rate. (7) All stone fences are regarded as obstacles.
Victory Conditions:
Basic game length is 14 Turns + any bonus turns.
“No Room in the Inn” has two possible sets of victory conditions: (1) If a player fails his army morale before the game ends, he looses. (2) Failing result #1, assess victory as follows: 1 VP is awarded to the side that controls (1) The Inn; (2) The Church; (3) each Hill (2 VP’s total). (4) and the Bridge. 1 VP is also awarded to the side that has fewer routed/eliminated units (regardless of type) at game’s end. The side with the most VP’s at game end win.
Note: “Control” (or recapturing) is defined as no enemy troops touching the objective. Control is negated for either side if enemy troops are touching the objective.
Solo Variation Rules:
Activation Cards cards are used. The sub-commander's card activates his specific brigade, while the commander's card activates any of his brigades or independent units. The units have to be within 10BW's, so a partial activation of a brigade can take place. When a card is drawn that brigade goes through the 4 phases of it's turn (well 3 really as the status phase is carried out when the deck is finished, at the end of the turn), followed by the next card and so on. Going through a deck of cards is one turn, they are re-shuffled and you start again. If the Commander is killed or wounded his card is removed from the deck. Each deck is the equivalent of a turn in Lasalle speak. Units are marked when they fire, and can only fire once per turn (card deck). I have also found in this card driven version, that a unit can be charged and the charging unit can be reactivated a second time (by the commanders card) before the defender gets a chance to react. Certainly the defending unit needs to be able to react, I am still deciding on whether I should do it at the time of original contact or just prior to the combat.
Order of Battle: 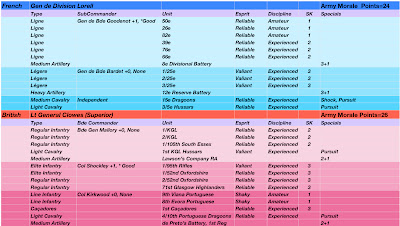 The Terrain:
I had to make some adjustments in the terrain as laid out in the original scenario to adjust for the terrain I have. The hills are to the south and east of the small hamlet of Santa Bárbara de Casa (an actual place just west of Badajoz). I have moved the forests slightly and will start one of the French brigades on the far side of the river. All units will start in column of march, aside from the 26e ligne which is deployed.
Centre view with initial brigade dispositions. The Inn and the Church are demarcated by the stonewalls and are single town bases. Shockley and Kirkwood's brigades start to the southeast of this view. 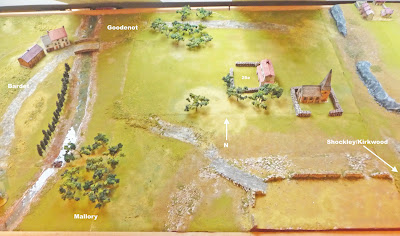 Looking west, with rough areas and access points to hills noted. Shockley and Kirkwood's area of disposition noted. The terrain ends at the measuring stick (10x5').

Looking east, the forests to the north and the south are also rough terrain. Aside from the church and the Inn, all other buildings are purely decorative, but of course are hard obstacles. Good view of both hills. The only passable road starts to the west of the river and leads to the hill east of Santa Bárbara de Casa, unfortunately in 2 areas in is quite overgrown, significantly slowing traffic. 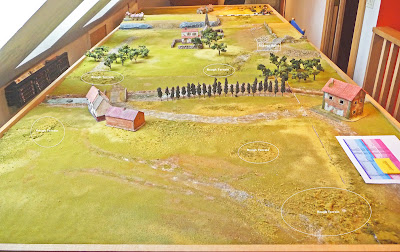