An ACW Campaign for Pickett's Charge 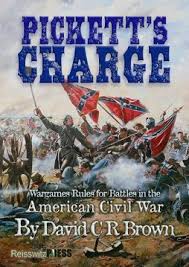 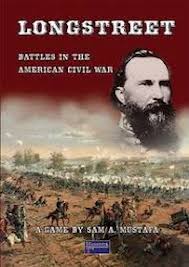 Myself and my friend Adam have decided to play another ACW campaign. We already played a campaign with the Longstreet ruleset some years ago. Our ACW figures have been languishing in boxes and it was time they saw the table again.

I have really enjoyed playing the two rulesets put out by David Brown in the last couple of years as published by TFL under the Reisswitz Press banner. I have played quite a bit of Général d'Armée with my friend Iannick in Montreal and have become quite comfortable with the ruleset. Pickett's Charge has similar mechanisms but the overall game is a little simpler. I liked playing Longstreet but I find that Sam Mustafa's rules, although superbly written in a very clear fashion, are pared down a little too much for my taste. I really enjoy the complexity of decision making that is the main characteristic of TFL rules in general. Yes, they are a little less clearly written (both Rich Clarke and Dave Brown use a much more conversational style of writing than Sam Mustafa) but if you do not overthink what is written, I actually find them quite intelligible. They are my first choice for Napoleonics and ACW.

I initially planned writing a historical campaign and I still do but Adam recommended that we use the campaign system in Longstreet. George A. had given me an excellent pamphlet he had written surrounding the Pea Ridge campaign which I plan to work on. But impatience and finding time has lead me to agree with Adam, especially after I saw the preliminary work he had done on translating the Longstreet campaign system in such a way that it can be used with the Pickett's Charge ruleset. I generally do not like playing a-historic or points based games but I think this is going to be OK.

The first step in making the Longstreet (LS) campaign work using the Pickett's Charge (PC) ruleset was dealing with the fact that LS is at the brigade level while PC is at the divisional level. Also LS uses the number of bases in a force to make a lot of decisions in respect to victory points, attrition, and reinforcements. In respect to PC, the most important command decisions are made by the ADC function which does not exist in LS. LS also has a set of campaign cards which are fun to use which we wanted to keep for our campaign.

Below, I will go through the LS Campaign section as laid out in the rulebook with our modifications. I will keep this updated as we go through the process. I think if you are unfamiliar with LS some of the following maybe a little puzzling but of course if interested you can always buy the ruleset.

Campaign Overview
The campaign will be 9 turns and will cover 1861-1865 with a varying number of games per year. We have decided to go with historical battles for our game set up in respect to terrain and victory conditions. The scenarios have been selected with respect to the historical situation during that specific year in order to balance out which side is the attacker and who is the defender.

Game one will be the First Battle of Bull Run where the Union Army is the attacker. Forces utilized will be generated as below.
Starting Forces
PC is a multi-brigade game but we are going to start with a small force that will increase as each game is played. Each army will have 6 large green infantry units, 1 standard green cavalry unit (the USA may subsitute infantry unit) and 1 three base mixed artillery battery. The player will arrange his army in 2 brigades with a composition of his choice.

In PC, each brigade gets an ADC as well as extras as determined by CiC. We have decided to double the brigade ADC complement for 1861 and increase it by 1.5 for 1862 (2 turns).  We will also add ADC's as follows:


This is to reflect the changing fortunes of each side as the war progressed.

Epic Points
LS uses a system of Epic Points to accrue experience. A lot of it is based on the number of bases in combat etc. etc. I have to say that I always thought this was overly complex. This has been simplified as below.

We are planning to use this system as a tool to increase the size our forces as well as the LS campaign cards. So an extra unit for each point gained in a turn. Limits on composition and total army size are discussed below.

Promotion
Dealt with by the ADC system as above. Instead the CiC gets to decide before each battle how he is going to field his army with the proviso that there is no less than 3 units and no more than 6 units in each brigade.

Battle Losses
In PC, each unit acquires casualties points with a standard sized unit being dispersed after 12 casualties. If the unit is dispersed it is lost but at the end of each game the number of casualties in the non-dispersed units will be reduced by 1/2 rounded up for each unit. So if a unit has 7 casualty markers at the end of a game, it will only carry over 4 casualties to the next game. It should be remembered that in PC units do not lose bases, they accrue attrition.

The only mechanism to shed attrition is through the ADC Rally Posting or the Serendipity Test Roll.

Reduction
Not in use.

Campaign Cards
At the end of a turn each player has a deck of campaign cards pertinent to the year and his army. Each player draws 4-6 cards depending on the year and can use them to improve or increase his army. We can not use all of them but can use most with some modification as below.
Maximum Army Size
LS lays out a minimum number of bases that each army may have, this ratio was converted to units as below for maximum army size. 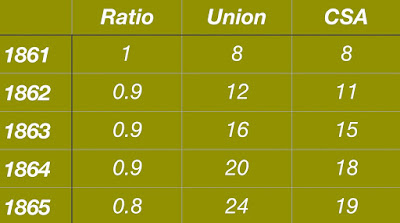 Units include artillery, cavalry and infantry batteries and regiments. The player may have a maximum of 6 brigades, each having a minimum of 3 units (except in the case of attrition where it may be reduced to 2)

Artillery is limited to 4 batteries with a maximum of 6 guns (3 bases) but the CSA may only have one 3 base unit. One base artillery units are not allowed.

So that is where we are now, I suspect a few things have been missed and some changes will be made. 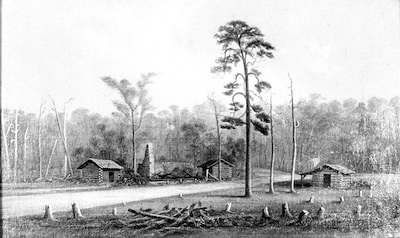 Last Friday, myself and Adam had our first Pickett's Charge game in about a year. I have a nice Blue Moon ACW Union army which does not get out often enough and Adam has an even nicer Confederate army. We have been playing quite a bit of SAGA but maybe a break was due.

The 2018 TFL Magazine had a nice scenario with 4 brigades per side so was an obvious choice for our next game. Essentially the scenario involves a confederate attack on a somewhat entrenched Union army. The Confederates were mostly classified as veterans and regulars while the Union infantry were half green and half regulars. No cavalry but a fair amount of artillery was available.

We had some minor questions about the rules early on but the game actually flowed quite quickly and I think we got in 9 turns whih is really quite good. I have played a fair amount of GdA recently and although there are some differences the mechanisms are quite similar. It was clear by the end of the ninth turn that there was no way the Confederates could meet their Victory Conditions so a clear Union victory.

I really enjoy these rules, I find them quite straightforward and give a good game with a lot of decision making. If I had one criticism it would be that using 4 ADC's aside really does not give you as many tactical options as are available as they are being used as Brigade Attachments to insure that they do not become hesitant. This is easily fixed by increasing the number of ADC's though which I think we will do in the future.

We are now considering playing a ACW campaign utilizing these rules. Any ideas?