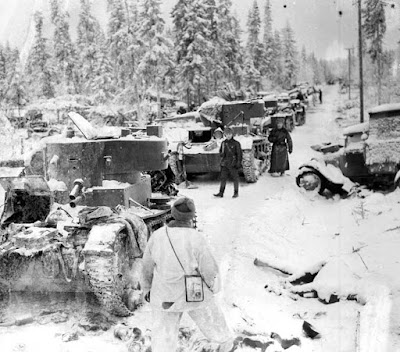 This past Sunday myself and Greg had a CoC game set during the Winter War. I have been working on a campaign for the Battle of Suomussalmi for a few years but got held up by the inability to find playtesters. Greg likes Early War games, so he is a good choice and he has quite a few games of CoC under his belt. I am about half way through the process now and it is going relatively well.

I have been working on this scenario for about a month, it is quite novel as rather than an infantry on infantry battle, it is really more of an armour on infantry encounter. I got the idea from the Skirmish Campaign booklet on the Winter War. The rules need some tweaking but in a relatively minor way and was curious how it would work out.

SETTING
Early January, 1940. The Battle of Soumussalmi is not going well for the Soviets. The 163rd Rifle Division is in retreat, and the 44th Rifle Division which was sent down the Raate Road to support the 163rd is being slowly cut to pieces by the Finns. The Soviet objective of cutting Finland in half is in jeopardy. Soviet high command decided to send an Armoured Column to counterattack the Finns and in an attempt to clear the Raate Road.

SCENARIO SPECIFIC RULES
Scenario 4 from rule book: Delaying Action. Both sides play the patrol phase as laid out in the rulebook with the Soviets being the Attacker. The Finns place their JOP's, however the Soviets do not as all their troops enter on the road. Victory to the Soviets if they cause morale failure to the Finns.

Basic rule changes: Soviet AFV can be activated on a 2 or a 3, for 1 CI and 2 CI's respectively. The Soviet infantry may disembark from their trucks but the Quad-Maxim team stays mounted. The Soviet T-26 platoon has a SL who may communicate to the other 2 tanks in his platoon as laid out in the rulebook. The T-26 platoon deploys as a complete unit.

Terrain: Heavy snow, the Soviet trucks have to stay on the road, the Soviet AFV's may go on the verge of the road (3" other side) but risk bogging down. The terrain is rough going for the Soviets but the Finns have skis and are not limited. The Finns may move 2 d6 tactically. The forest is light cover and blocks LOS up to 6". The hill is impassable and blocks LOS.

The Winter War Soviet Army list is here, for calculation of the AFV support values I would use the Consolidated Arsenal values as this list is incorrect.
The Suomussalmi Finnish Army list is here
The Striking Back Scenario pamphlet is here.

I am a very poor AAR writer and I forget to take photos almost immediately once a game starts. I will let the photos tell the story.

SUMMARY
We both thought the scenario worked quite well. It could have gone either way. I certainly made some mistakes and really did not effectively utilise my AT resources. Greg did have a lot of double phases near the end of the game and he advanced his forces well. The game played out in 2 1/2 hours despite us having to look up how some of the rarer units worked. Neither of us were really familiar with how AT weapons work, as we seldom play with AFV's.

I left a whole infantry squad un-deployed as well as a sniper and never got to try my slide mine. Greg did not have a chance to bring on his 2 BT fast tanks as well as his Flamethrower tank.

I believe we both enjoyed the game and Greg mentioned that he would be keen to play again with the Finns!

The scenario is set up so you can use what early Soviet tanks you have in your collection as laid out in the Arsenal Summary for the Winter War. Just select 33 points of AFV's as delineated in the above Winter War Soviet list. I will leave debates about which tanks actually fought along the Raate Rd to those more informed than myself.

I am still not sure if I would change anything, although I should point out that I did not chose a Roadblock as one of my supports as I had not given the Soviets any resources to remove one. Roadblocks are quite tough to remove in this ruleset.

If you chose a Roadblock, I would add a Soviet Engineer Demolition squad with a JL to the Soviet OB. I would then also add 4 more supports to the Finns for a total of 25.
Posted by john de terre neuve at 06:09 3 comments

Last Saturday I travelled out to Concord, MA to have an Early War Norwegian Front CoC game with Greg. Greg is an aficionado of the Early War especially the border confrontations that took place in 1939-40. He has quite a terrific collection of EW troops in 28mm many of which I have yet to see on the gaming table. Greg had travelled to Salem about 6 weeks ago and we had a great Winter War game.

The scenario was centred around the land battle that took place during the Battle of Narvik. I know almost nothing about the Norwegian Campaign so this was a nice introduction. What is especially fascinating is the different forces that were involved as you can see in the OB below. The scenario was number 5 from the CoC rulebook, The Flank Attack. This is a bit of a challenging scenario which I had not often played. We tossed for sides and I ended up as the Defender.

As usual, I forgot to take many photos but I have a few which will help tell the story.
I really quite enjoyed the game but I have to say losing 3 JOP's at one time was a novel situation even for me! It was a lot of fun to play these different forces. I did not play my best game and Greg played well. Greg also makes great use of grenades as well as Covering Fire, tactics that I have not used much in my previous games. Interestingly enough there was no double phases in the game. I felt the dice throws were pretty equal.

We are planning to meet again for another Winter War game at the end of August, which should be interesting as I am planning a Soviet Armour vs Finnish Infantry game, but more on that later. Otherwise on the CoC front, I am hoping to start the Von Luck campaign with my friend Mike, although I am having some problem tracking him down. I am also hoping to restart my Thursday evening gaming with Adam in the next week or two.
Posted by john de terre neuve at 08:21 14 comments