I had not planned to paint any French Heavy Cavalry as none of these units served in peninsula, aside from the 13ème Régiment de Cuirassiers and than they served in no major actions. My new found interest in the Waterloo campaign has of course changed this. These are the first armoured cavalry I have painted. A brief run down on these units can be found here. 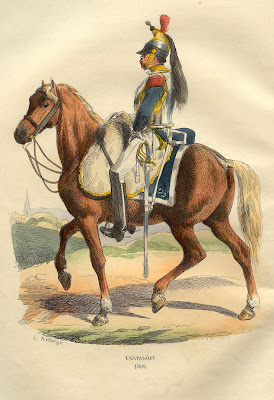 I decided to go with the  Perry plastic heavy cavalry. These are nice figures, easy to assemble and paint and they look great. This is the second unit of Perry plastic cavalry I have painted, and I like these even more then the dragoons.


As readers of this blog will know, these figures started off as green. A quick application of Vallejo Prussian blue followed a light drybrush of sky blue sorted that. The horses were done with Citadel Brown Ink. I am still trying to find a good pink, this is a mixture of red and white. If anyone has a suggestion for a premixed light pink, I would appreciate it, I do not like mixing colours.


The unit is based as a large Lasalle unit with 6 bases, and I hope that they will see some action in my "La Haye Sainte" scenario. I have to say that I really enjoyed painting these figures.

The knowledgable among you will of course point out that the 1ème et 4ème Régiments de Cuirassiers are in the OB for this action, but I wanted pink so we have 10ème.

The sharp eyed will also note that the flag is wrong, as the 10ème have battle honours for many actions through central Europe. This is the flag for the 4ème, 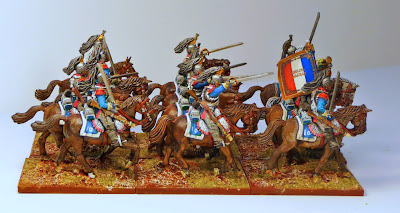 I have one more box of heavy cavalry which I believe I will do up as 2 regular Lasalle units (4 base); the 1ème Cuirassiers and 1ème Carabiniers. 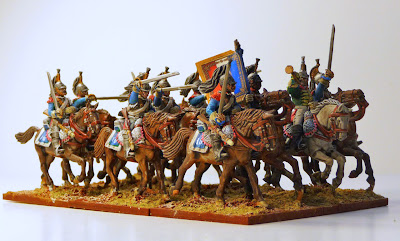 At least I did not have to repaint the trumpeter! 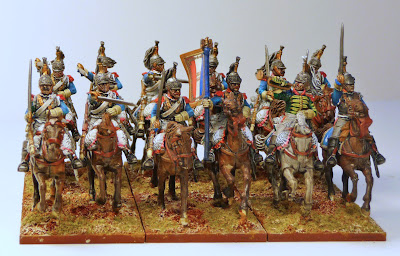 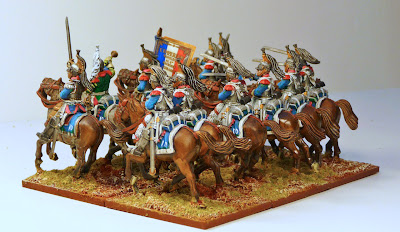 Well let us get on to something completely different. For my "La Haye Sainte" scenario, I needed a unit of rocket troops from Captain Whinyates' Rocket Battery of the RHA. This rocket battery was made up of 13 sections each of eight 6pd rockets as well as some cannon. I knew very little about rockets so decided to do some research. I knew that the rocketmen wore the uniform of the Royal Horse Artillery so that was pretty easy. 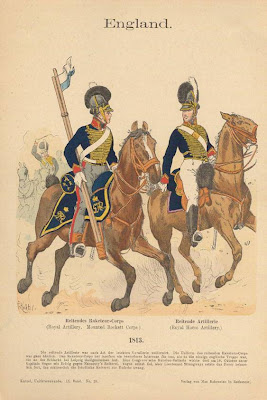 .
What was confusing though was the contents of the Old Glory British Rocket Troops package. There appeared to be 2 sizes of rockets and apparati. A search through google books revealed Congreave's original treatise and I found out that rockets came in all sizes! 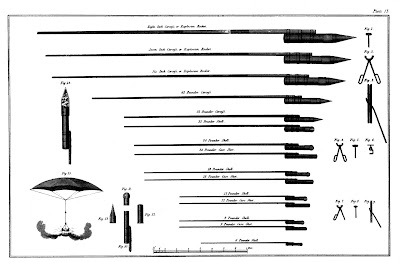 After a good sort through the package, I decided to do 3 bases of the big rockets and 1 base of the small 6 pders, I needed for the La Haye Sainte scenario. I could find no reference on what colour to paint the launching apparatus, but decided to go with the British artillery blue-grey. I use GW Fenris Grey for this purpose. The white primed figures were painted using a Vallejo Prussian Blue and GW Fortress Grey. I have started to modify slightly my method of applying the Army Painter dip. I continue to paint it on generously after I have thinned it slightly and then within 1-2 minutes remove the excess with a dry brush to prevent any heavy build up or pooling. This is working out quite well and has lightened up the figures. After application of the matt varnish, I sometimes do some minimal drybrushing, here I only felt that I needed to touch up the white on the helmet plumes. Saxon Dog who is a far better painter then me, has a nice tutorial on his blog illustrating this method.
So here we have 3 bases of the 42pd rockets, they actually would fire them in 2's, so I should have 2 rockets on each apparatus, but I felt this was more illustrative. I have one extra large rocket that I will probably add in when I get a chance. This will represent a full section of rockets. I am sure they will see action in the future. One weakness of the Old Glory miniature rocket set is that these are clearly cannon men and not specialized rocket troops, I suppose I could have done some modifications, but I left them as is. 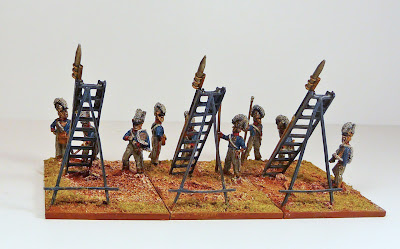 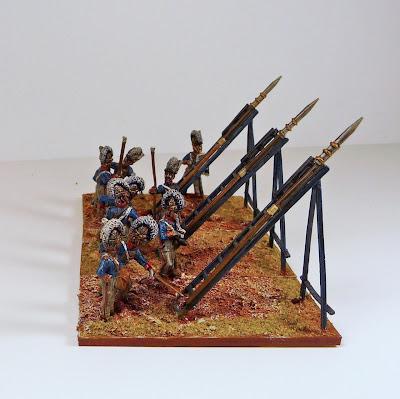 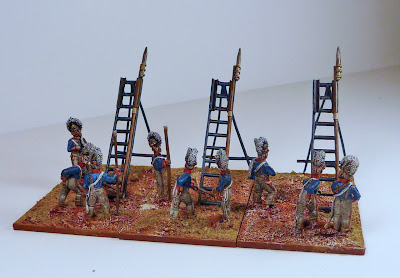 How would this be for some future figures. Maybe someone who knows the Perrys' could send this illustration on to them. These would be very cool miniature stands!

For the La Haye Sainte scenario, I decided to go with one stand with some 6 pders. Lt Dansey, RHA was sent forward with 2 guns and some rockets, he left the 2 guns behind and advanced by foot with his rockets to assist in the defense of La Haye Sainte.


Here we have Lt Dansey and his men with their rockets already to fire at the advancing 13e légere! 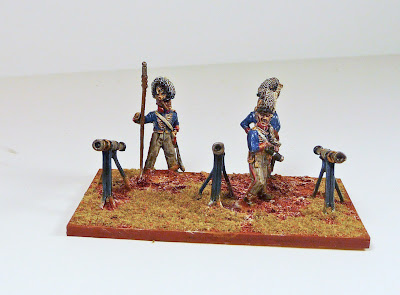 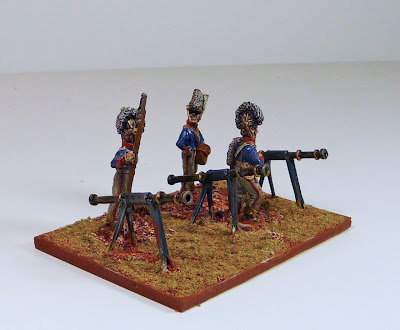 These bases were fun to assemble and although I favour other figures over Old Glory, I am quite happy with these 4 bases. I may even do up one of their rocket limbers in the future.


Time to get out the blue paint I suppose.

A Cautionary Tale: The Green Cuirassiers!

Formerly titled the 4ème Régiment de Cuirassiers
Well, I never thought I would make such an error! I have been rushing to finish up this unit of cuirassiers for some time. I had done 4 of the figures before Xmas. There is a painting contest over at Analogue Hobbies, and I was also keen to get my next scenario "La Haye Sainte" started and I needed a unit of cuirassiers.
I noticed after I had sent the photos to Curt at Analogue, that the 4th actually had orange facings and I had painted these pink; easy enough swop out the flag and repaint the numbers (shame really as I had done a nice job  on the 4's) on the saddle cloth. I was trying to figure out why I had done what I did, so I was reviewing some sources and suddenly it dawned on me that I had made a much bigger error, by painting the coats and saddle clothes green. Merde!!! F..........!
I still have no idea what happened, but here they are "Les Cuirassiers Verts". Time to dig out some blue paint I suppose. 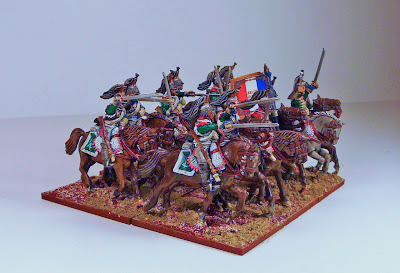 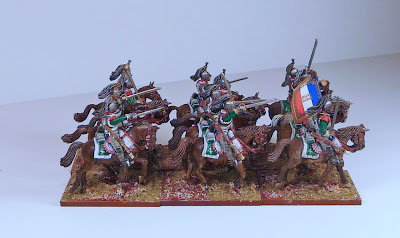 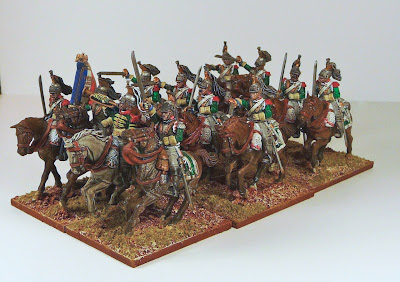 Here I hope is the start of my next army: The Prussians. I had dabbled with the Prussians a couple of years ago when painted up a few small (12 figure) units of Wallmoden's Korps. This was my first introduction to Calpe figures and I have been looking forward to getting back to them.
As readers of my blog will have noted, I have recently developed an interest in Les Cent Jours. I suppose when you have built a large British force, it is hard to abandon it. So with a good few French done, I felt Prussians would be a good idea. Lots of mini scenarios germinating in the old grey cells involving the Prussians at Placenoit, Wavre and Ligny. My recent success with the Lasalle rules in an asymmetric scenario have also encouraged me to press on.
I had a look through the Prussian forces in the Waterloo campaign and was fascinated to see that many of the units that were in Wallmoden's Korps had been folded into the 1815 Prussian OB. Even more cool was the fact that it seemed that most of these units were still uniformed as they were in 1813. I wanted to start with a Prussian brigade with 9-10 infantry battalions and some artillery and cavalry support. It felt it was a little boring to stick with the actual OB for a brigade, but rather to have any 3-4 units each from the original 1813 line infantry, reserve infantry and landwehr OB. I suspect, since I have some of the units partially painted for Walmoden's Korps , we will see IR25 (von Lutzow's Freikorps), IR30 (Russian German Legion) and III/IR27 (von Reiches) in my Prussian brigade. Might even try to jam in IR28 (Berg in French Uniform). Certainly Lutzow's Hussars will also appear as the 6th Prussian Uhlans. Steven Summerfield's books as well as Les Cent Jours website were quite invaluable in my research. As most of you know, I try to build my units around the Lasalle army lists, I will start with the core list and slowly add infantry and light cavalry abteilung organic brigades.
Well that is all very exciting and it is easy to get carried away. But back to the current post. Here we have I/RIR11 or I/IR23 in 1815. By 1815 this unit would have still had their grey reservist uniforms, aside from the officers. They should be in regulation shako, but I had these figures on hand with the peaked reservist cap, so they must of lost their shakos. The figures were primed white, followed by Citadel Fortress Grey for the uniform and Astronomican Grey (more blue tinge) for the overcoat rolled over the shoulder. Usual other colours, followed by AP Darktone (very thinned-thank you Roger), and a quick drybrush with the Fortress Grey. The yellow collars identify their Silesian origin. The flag is wrong  (it is for a Landwehr unit), but it does look nice. I believe I may change over to Flag Dude, it is just so much easier to have the flag all set to go. 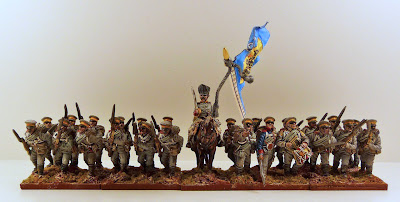 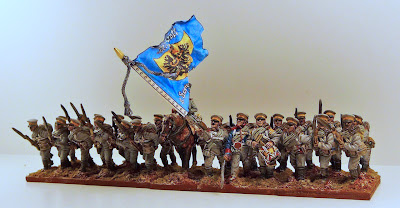 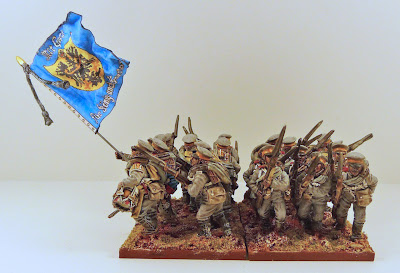 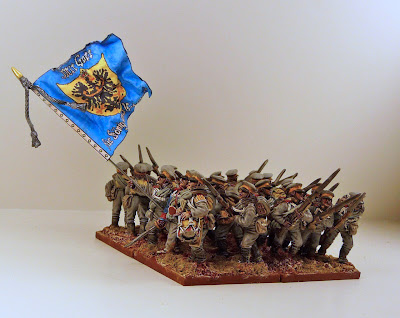