And Now for Something Much Smaller: A New French Army 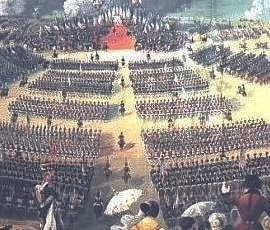 So I bet you were expecting to see my new 18mm AB army, but first I thought I would show you something different. Some weeks ago I mentioned that no one knows the madness of war gamer with money to spend. I am actually fairly careful with my wargaming expenditures, but the sale of more than half of 28mm Napoleonics left me with quite a bit of money in my paypal account, the great part of it is being spend on commissioning the 18mm replacement army, but there was some left. 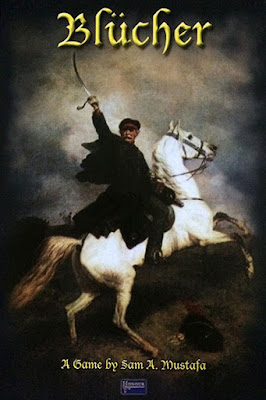 I have never played a grand tactical Napoleonic game but when Blucher came along I was tempted. The whole thought of being able to use a card as a blind until revealed was very attractive to my wargaming heart. And those pictures of those little troops on the cards was quite attractive. 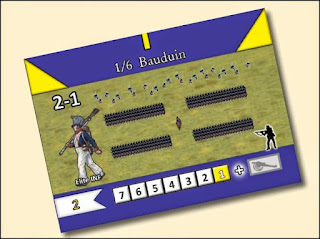 So I set about commissioning painters in the UK to paint some 6mm Bacchus figures, these seemed to be well priced and came in usable strips unlike Adler. I also noticed that painting services appeared to favour these figures over the other choices. I am not sure how much I paid per figure but it seemed reasonable and I felt that I could get pretty good sized armies on the table for not too much. I still have some French and British reinforcements on the way (one painter appeared to lose their way!) and have a British army on hand but not yet based.

Going against the tide, I decided to base my troops not on 60mm bases but on large card sized bases from Sally 4th. Not being able to use the cards, that come with the rulebook, as blinds just ruined the whole concept for me.

But anyway enough talk let us post some figures. 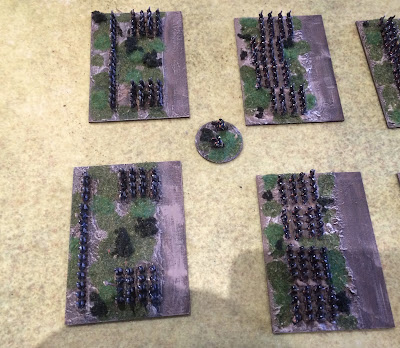 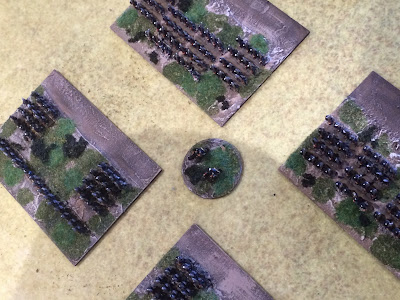 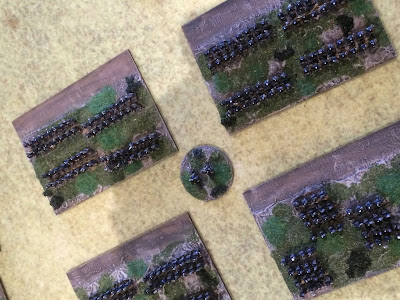 I plan to have around 25 bases per army and as you can see I have left the rear of the bases open, as I still have not decided how I am going to designate the Order of Battle as well as damage.

Let us hope that I can find someone to play, the game has what looks like a a very attractive campaign system which is really my favoured gaming pursuit.
Posted by john de terre neuve at 09:23 24 comments 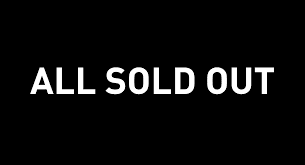 Well after a long and hard flog my French Napoleonic army has finally been sold. I believe some of these troops must of been the first figures I painted when I took up wargaming.

I have to say that it will not be with regret that I package up the last 5 battalions today. My new 18mm AB army is fantastic and I will look forward to getting it on the table. The initial French force is all done and I should get some photos up soon. I just have to finish off the commanders basing.

Some of the 28mm French do remain however and will see action playing the much anticipated Sharpe Practice 2. This is a skirmish set for the Horse and Musket period and I am looking forward to one game that I can use for both my Napoleonics and for my French Indian War forces.

Although I plan to hold on to my Anglo-Portuguese Army as well as Brunswick Corps in 28 mm, my 1 unit of Nassau are now up for sale.

Here is my second Napoleonic submission to the challenge and what I believe is my fifth overall submission.

First, I have to say that I am happy that Curt has decided to treat AB Napoleonics as a 20mm submission as I find these quite a lot of work to paint. There may have a little less detail to paint than 28mm figures but where they are smaller, I am finding it takes me quite a bit longer to paint them.

Second, I am very happy that I have decided to get someone else to paint this new army for me. The two services I am using do a great job and are relatively quick painters, I should have my French and Anglo-Portuguese forces on hand by the end of March. I am quite pleased with this as I think I would be dead by the time that it would take me to paint these little buggers.

Overall though I am quite pleased on how they have come out and it makes quite a change from painting WWII figures which are a little less interesting to paint for sure.

Anyway here they are. One battery of Artillerie à pied Français and 1 battery of Royal Foot Artillery with a mounted officer. I have another French and British battery on the painting table and I will probably add 3 more French batteries and 2 more British batteries to my army. I am also planning a Spanish brigade which will have 1 battery. I believe that will balance things out. 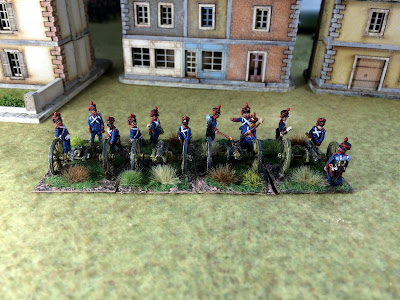 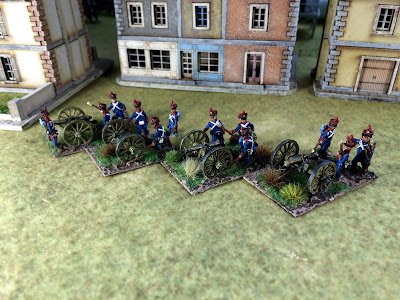 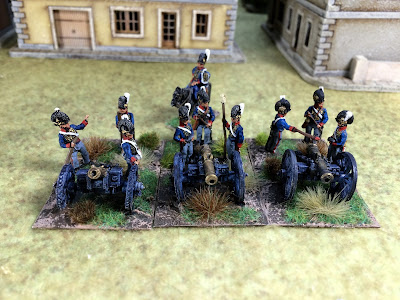 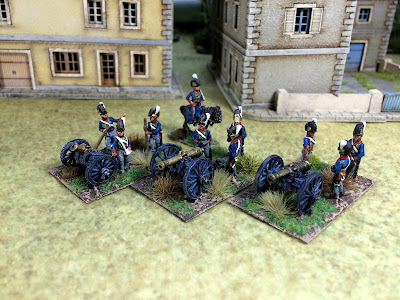 I have quite a load of Japanese on the table, hopefully they will be up next.
Posted by john de terre neuve at 07:55 8 comments 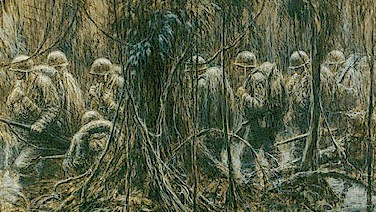 This is about half of the troops needed for my Chain of Command USMC platoon for a Guadalcanal campaign. Most of the troops are from Warmodelling, but I supplemented the support teams with troops from the PSC US Heavy Weapons Box.

Last year I put a lot of work in researching the WWII Pacific theatre (I knew absolutely nothing about this aside from reading Norman Mailer's Naked and the Dead many years ago as well as watching the The Pacific mini-series). My main goal was to put together a CoC Army List for the type D USMC organization. A Type E organization list already existed but this was quite different that what was used in the 1942-43.

I game WWII in 1/72, and in metals there is not a whole lot of choice aside from Eureka and Warmodelling. There are a 2-3 other companies who make metal figures but they all looked like grunting chimpanzees to me. I had bought a couple of boxes of Waterloo 1812 plastic figures, and they were quite nice but I really am not keen to use soft plastic. Lovely slender sculpts though and they have figures for both the USMC and the Japanese. I can recommend them if you want plastics.

I had used Warmodelling for my Winter War Finns, they are nice sculpts but the casting was quite poor. I had been assured that when Battlemodels took over that the all casts were going to be re-done. Unfortunately they were not and the models suffer from the same problem with especially poor faces and a lot of flash that is almost impossible to remove.

Anyway, I went ahead and painted them up and they look OK. I am still missing 1 rifle, BAR and raider squads and these are on the way from Eureka Miniatures. These are much nicer figures, my Japanese Platoon which is next up on the painting table is made up of both Eureka and Warmodelling, the Eureka Japanese are quite nice and I am sure that their USMC figures will be equal in quality.

Each group is described in the captions and I did enjoy putting together the force. 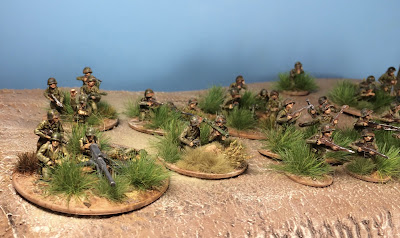 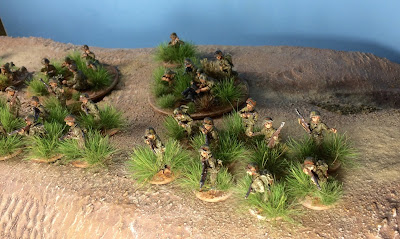 For those who are interested here is the list I developed for CoC, it has got big Rich's stamp of approval. You can download a pdf here and read about it's development here. 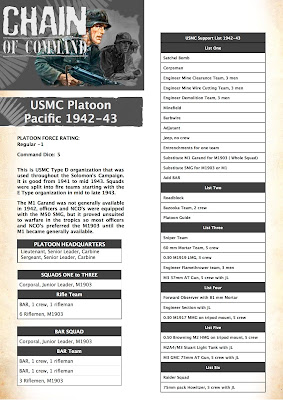 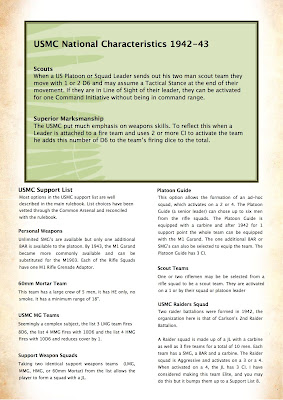 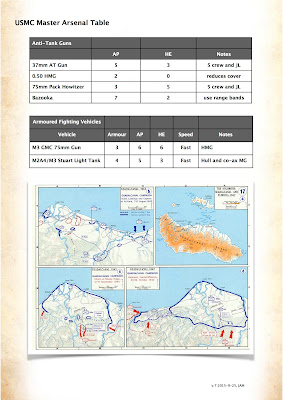 Now on to some Japanese.
Posted by john de terre neuve at 16:36 10 comments