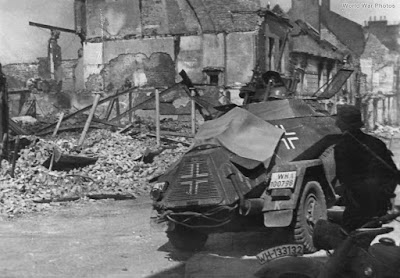 We had the next game in our Gembloux Gap campaign last night. The Germans have failed in their first two attempts to take this table, time to win!

Here is a photo of the table which should be well known to you now. 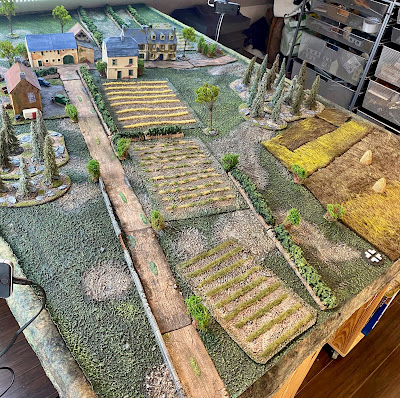 Dice were rolled and the game started:
Germans (FM 10) (3 Schützen Regiment)
Schützen Platoon #2
Supports (22)
IG 18
Jean-Claude
Red Dice
PzII
Sd.Kfz 222
Pregame Barrage
?
?
?
French (FM 10) (110e Régiment d'Infanterie)
Infanterie Platoon #2 (less 10 men)
Supports (9)
Canon de 47mm L53 ATG
Pregame Barrage
Squad de Motocyclistes
As usual we played out the Patrol Phase on P-Y's ap. The smaller dots are the JOP's, while the numbered dots are the PM's at their final positions. Again, I really did not accomplish what I set out to do, ie trying to prevent P-Y getting an advanced JOP in the south of the table, you can also see that I completely abandoned the northern approach with my JOP's. I did leave the option open though of deploying in the cornfield. My other main goal was to get the IG in a better position than I had previously. As you can see below I was able to accomplish this. 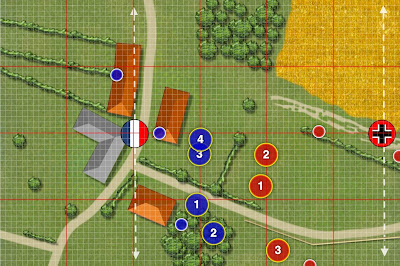 The Action
These photos were all taken at the end of the game, with the exception of the first.

P-Y, I felt was a bit unlucky in this game. I had no problem deploying under his PGB but he had great difficulty. He did however get a few double phases as where I did not get any. It was the shortest game we have played, around 90 minutes but that was OK as we both got to watch the Habs game last night! 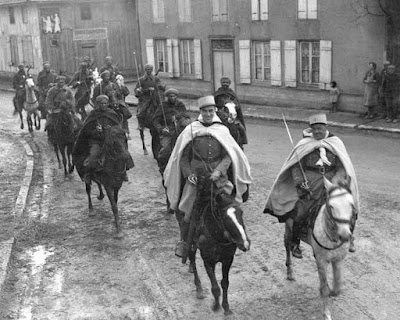 We had the next game in our Gembloux Gap campaign last night. The Germans had failed in their first attempt to take this table so this was their second go.
Here is a photo of the table.

Dice were rolled and the game started:
Germans (FM 9) (3 Schützen Regiment)
Schützen Platoon #1 (less 9 men)
Supports (20)
IG 18
Jean-Claude
MMG Team
Red Dice
PzII
Stuka
2 Cars
French (FM 8) (110e Régiment d'Infanterie)
Infanterie Platoon #2 (less 10 men)
Supports (9)
Canon de 47mm L53 ATG
Sniper
Squad de Motocyclistes
As usual we played out the Patrol Phase on P-Y's ap. The smaller dots are the JOP's, while the numbered dots are the PM's at their final positions. As should be obvious, I did not play this well as I allowed the French a very advanced JOP in the small forest in the south more than midway up the table. 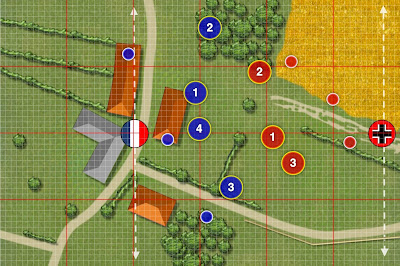 The Action
The first part of the action was the Stuka attack, it did not do much in respect to the buildings aside from the garage catching fire, thus denying the ability of troops to occupy the building but more importantly sending off a plume of smoke blocking line of sight for at least one turn (it actually remained through out the game despite having 4 game turns). I will let the following photos tell the story. 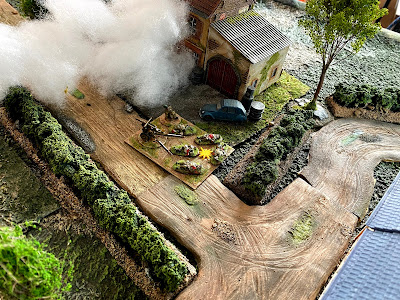 P-Y played an excellent game and turned what looked like an early German victory into a defeat, so we meet again next Tuesday on the same table for our next session in the Gembloux Gap campaign. 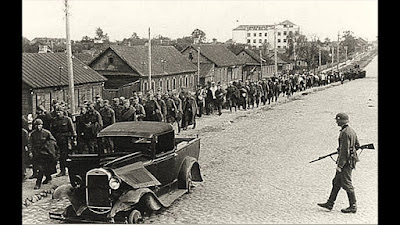 We finished off Game 4 in our Minsk campaign a couple of weeks ago. Here is the final report for this game.
As you can see the Germans were successful in this game, so in the next series of sessions we will be seeing a novel terrain.
Posted by john de terre neuve at 10:32 0 comments