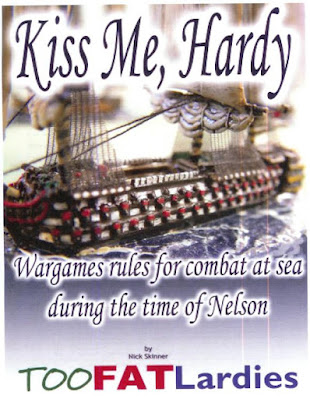 We had our first game of Kiss me, Hardy; the Age of Sail ruleset from TFL. We have played quite a bit of Black Seas from Warlord Games but we are always ready to try something else and since we play quite a few TFL rules, we said why not?
This is one of the early rulesets from TFL and was written by Nick Skinner, we have played quite a bit of Bag the Hun, also from the same rules writer. On the face of it, the rules looked a little complicated but once we started to play they were actually quite simple. We played for about 3 hours and finished the game with a clear victory. This is really quite good for a first outing with a ruleset being played over the internet on Discord.
We played a scenario from the 2019 Lard Special called Bahama Broadsides. This is scenario was written by Chris Stoesen, a frequent contributor and scenario writer for TFL. The scenario is written for smaller ships and requires the To Covert Glory supplement for playing games with small ships. These are mostly modifications for firing power and movement. I should note that like a lot of early TFL rulesets the game is card driven.
The scenario is set in the waters off the Bahamas and involves the HMS Rose, a 6th rate frigate on patrol. It encounters a Spanish convoy of 4 ships on their way to St Augustine with papers outlining the plans for the invasion of Georgia. The convoy are all small ships with the San Juan Batista, a snow with 10 guns and 10 swivels, it is accompanied by 3 other schooners and sloops, all similarly armed. The captain of the HMS Rose decided to pursue despite being outnumbered. The victory conditions in the game are that the Rose will earn a draw, if they survive the battle and will win if they can also take one Spanish ship. The Spanish win if they can exit 3 ships off the far edge of the table.
Pierre-Yves ran the scenario from Montreal while I was in Salem. I believe all the small ships in the game were 3D printed. I will post some of his excellent photos.
Some glamour shots 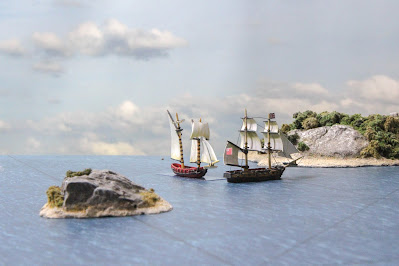 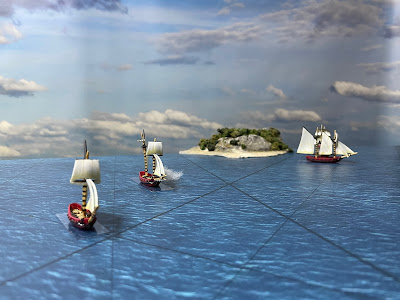 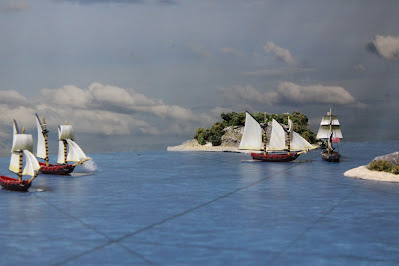 This game went very well and it was a lot of fun, it is quite different to Black Seas in mechanism and activation. The card system really makes it quite a bit more interesting than Black Seas. It was so much fun that we are going to have another game this Wednesday with me hosting the game. This will be a one on one action for which I am now painting up two 5th rates.
Posted by john de terre neuve at 12:19 0 comments

USMC (FM 11)
2nd Marine Raider Battalion (missing 13 men)
Platoon #2
2 SL's
2 Raider Squads with Superior JL's and 9 men (-3 men)
Supports (11)
Raider squad
extra BARs for 1 squad
Native Assistance
M1919 LMG Team
Japanese (FM 10)
62nd Garrison Force (missing 19 men)
1 SL
1 Inferior SL
2 LMG Buntai's with JL's
Knee Mortar Buntai with JL and 3x50mm Mortars (-6 men)
Supports (6)
MMG team
Marksman
Adjutant
Patrol Phase
We started off using P-Y's patrol ap, smaller dots represent the JOP's. This was the "Attack on an Objective" scenario for the main rulebook. The Raiders have to blow the Fuel Tanks. This was a completely different game then the last in that the Raiders were able to capture the southwest part of the terrain so their approach to the objective would be from the south. 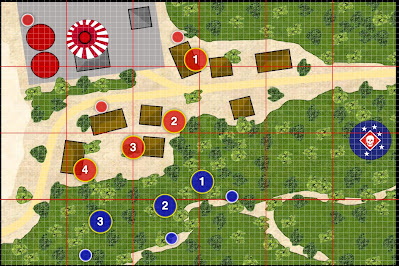 The Action
The game took place over 2 days, as we got started a little late the first session. We finished up this past Tuesday. All the core players showed up for both sessions. I thought I had taken more photos but it appears I had not. There was a bit of tentative movement in the first session but the game certainly sped up in the second session.
the IJA green squad is finally deployed just out of LOS being screened by the jungle. He orders the knee mortars commanded by Petri to advance from behind the oil tanks to support the IJA green squad.
I really enjoyed putting on this campaign, it is the first time I got a chance to get my jungle set up and troops on the table. My Finnish friends are all great CoC players and it was anyone's campaign to the very end. Also thanks to William Thorpe for putting this, a very well written campaign, together.
Posted by john de terre neuve at 08:13 3 comments