Closing the Gap: The Crossroads 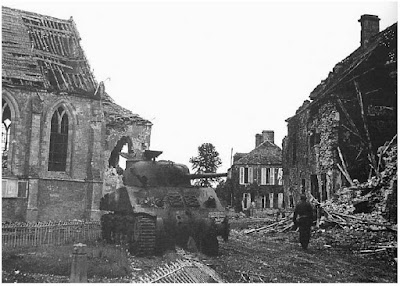 Yesterday we finally got in our next game in our Falaise Gap campaign. It had been 4 months since our last game, both myself and Mike had busy summers, but oddly enough we really had no problem with the rules. They seem well imprinted now. This was our seventh game in the campaign, I (Canadians) had won the last two games and was clearly looking for a victory to clinch the campaign. Famous last words!

I packed up the car and headed off to Rhode Island, it is a bit of a drive but it was a nice day and I find the drive quite relaxing. Added to this was I was driving my new A7 as well as anticipating an excellent lunch that I knew Mike's wife Paris would provide.

It was my choice of scenario, and the only one we had not played was The Crossroads (Scenario 5 in the campaign book), this had a significant number of buildings but I felt we probably had enough houses. This is scenario 3 from the main rule book, Attack and Defend.

By now in the campaign the Canadians had almost sealed up the Falaise Gap, all they had to do was seal off the centre of St Lambert sur Dives and the Germans would be prevented from retreating to the east. Defending the town were hardened German Falischirmjägers,  these are a strong force with 2 LMG's per squad. The Canadians morale was high though and all though having suffered about a 15% attrition rate they planned to attack with vigour.
Well it was a great campaign, Mike is a real gentleman and an absolute pleasure with whom to game. All there is to decide on is which campaign we shall play next.
Posted by john de terre neuve at 10:45 6 comments