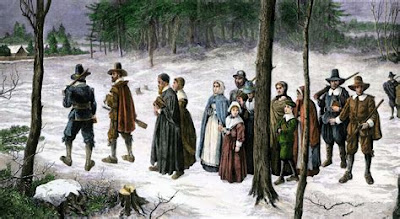 I have been looking for some figures that I could use as Witch Hunter aligned militia for Devil in The Wilderness. I found these figures in the Brigade Games: King Philip's War line. As is usual with Brigade Games miniatures, these were quite impressive. I am trying to use up my Citadel acrylics (excellent paints but sick of their pots), I am down to about 20 pots now and most of them are muted colours so excellent for the late 17th century. I am not sure where I could use them playing Muskets and Tomahawks, but if pressed I am sure I could work it out. I believe, I could have done a bit more prep work on them but I am quite happy how they came out.
These are extreme close-ups, so they look a little rough, but for the table top I am quite pleased. I usually do not take close-up but I was intent on showing what great miniatures they are, rather than to demonstrate my painting ability. 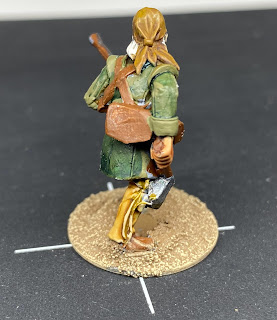 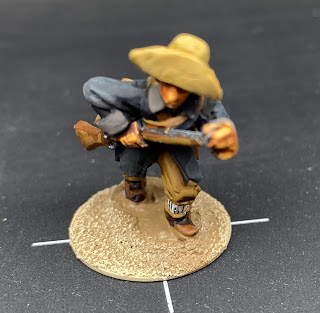 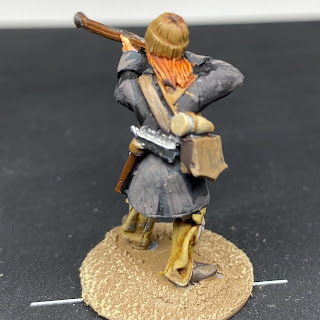 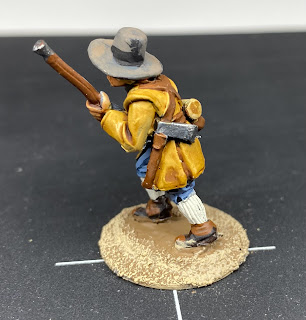 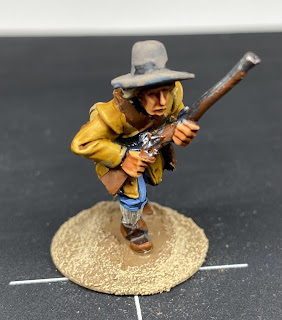 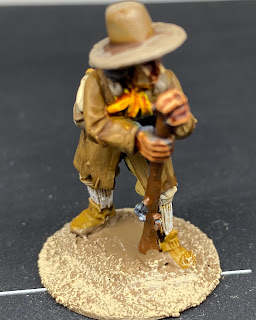 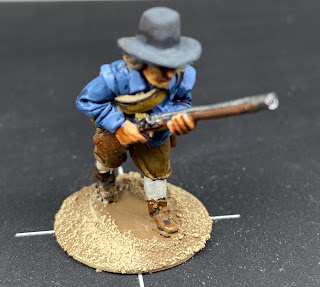 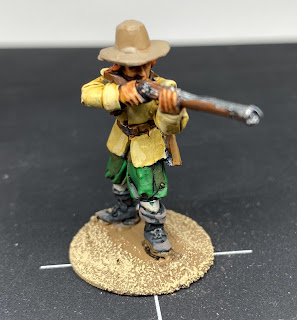 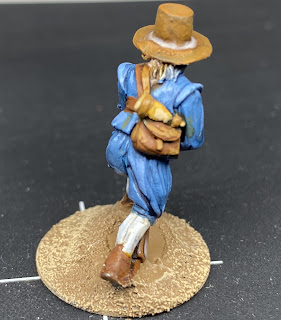 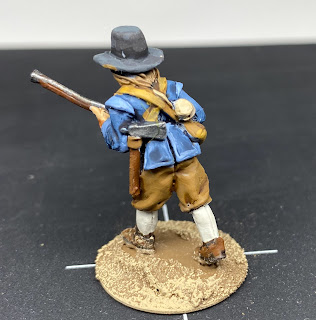 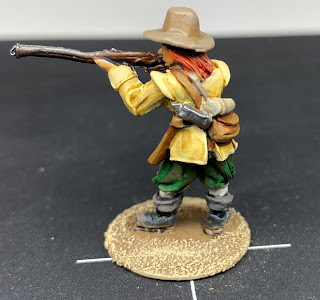 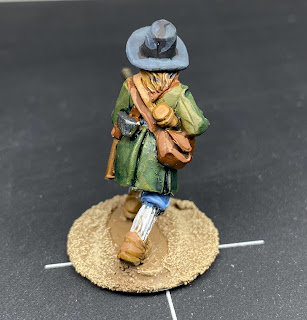 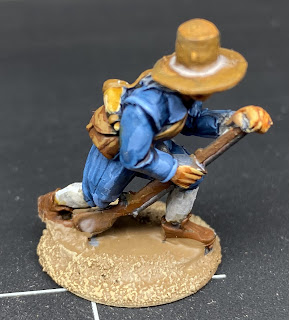 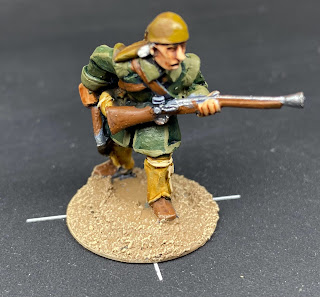 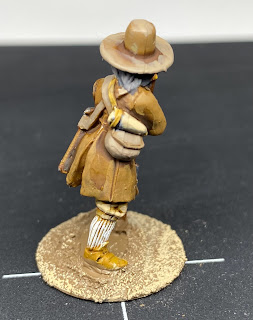 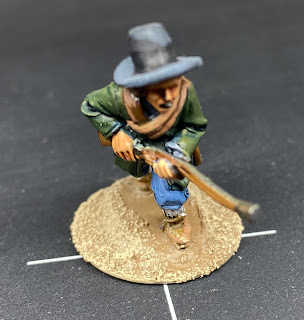 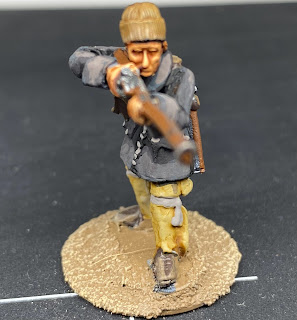 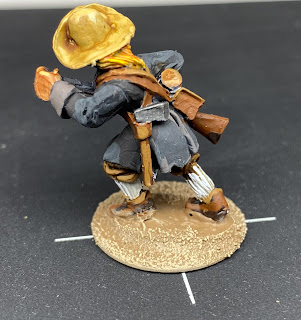 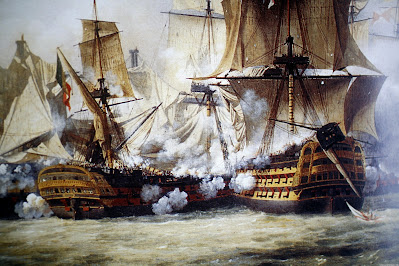 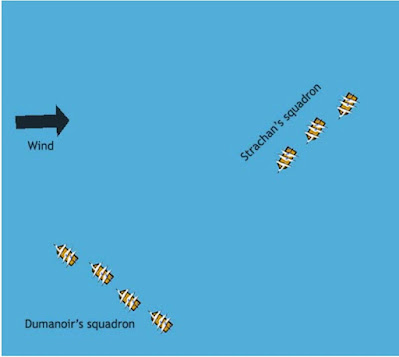 I was playing the French so I started off making a starboard turn to get my ships "on the quarter". Unfortunately, one of my ships was a poor sailor so out line was almost immediately broken, the HMS Namur entered the table at the end of the 2nd move and appeared to be crewed by good sailors and very soon got caught up to the rest of the squadron.
Here are some photos, apologies again for lack of rigging and you will see that I used Scandinavian ships for the British squadron aside from the Hero, which was RN flagged. I used Spanish ships for the French aside from Duguay-Truion which carried French colours. The 80 gun ships were 3rd Rates and the 74 gun ships were 5th Rates from my collection.
The Summing Up
British Squadron-Strachan
HMS Caesar, 54 DP left at 7 cm speed. Steering damage
HMS Courageux, 58 DP left at 11 cm speed. Boats destroyed
HMS Hero, untouched
HMS Namur, 61 DP left at 10 cm speed. Foremast Destroyed
French Squadron-Dumanoir
Le Formidable, Struck and captured
Le Scipion, 49 DP left at 8 cm speed. Boats lost
Duguay-Truion, 70 DP left at 12cm speed.
Le Mont Blanc, 71 DP left at 12 cm speed.
The more I play this ruleset, the more I enjoy it but I have to say there are some challenges to playing it virtually. I will look forward to getting to play in person. I believe P-Y is planning to work on some templates for the game which will assist with deciding if where a ship is in the wind and more importantly when a ship has a full broadsides.
Posted by john de terre neuve at 15:18 0 comments

We played our next game in the Normandy campaign yesterday, in game 1 the Germans had failed to defend Lion-sur-Mer and had retreated to Hermanville-sur-Mer. The British platoon (A/1) decided to follow up their victory by pursuing the German platoon (10.Kp.IR.736) into the town. In this case they were trying to capture the main crossroads where the Marie and Eglise Sainte Pierre were situated. Rather than going up the main route through Hermanville-sur-Mer, they were commanded to advance on their right flank through some bocage lined fields. We set the game up as an "Attack on an Objective" 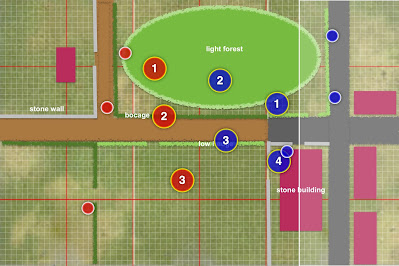 I felt that Jur got the better of me in the patrol phase, getting his 3 JOP's fairly far up the table. I would have liked to get a JOP on my left flank but one was unable to place one there. I decided not to take my 4th JOP at the crossroads as the area was already well covered.
Butcher's Bill
This was a very bloody game, and the Brits paid dearly. They lost 14 figures and a 2 JL's. The 5 figures lost by the Germans were not counted as there was a 6 point difference in FM at the end of the game. I should note that this is quite a complex campaign and the British companies have at least 2 platoons each. We will track each platoon individually in respect to CO and MO but the Platoon Commanders out look will be the over all Battalion HQ Out look.
British Platoon #A1 (3rd ID)
FM 3
7 dead 4 missing (total dead now 9 with 4 missing the next time they are in action)
2 JL reduced to 1 CI for next game.
CO +1
MO -5
HQ Outlook Happy
German Platoon 10.Kp.IR.736 (zug #1)
FM 9
no loses (2 men ded in the platoon for next game)
CO +1
MO 0
HQ Outlook Affable
Tactical Decisions
10.Kp.IR.736 (zug #1) to hold Hermanville-sur-Mer
5.Kp.IR.736 (zug #2) to hold Sainte Auban-sur-Mer
12.Kp.IR.736 (zug #3) to stay in Douvres-la-Délivrande
Posted by john de terre neuve at 09:46 2 comments

Attack on the Settlement 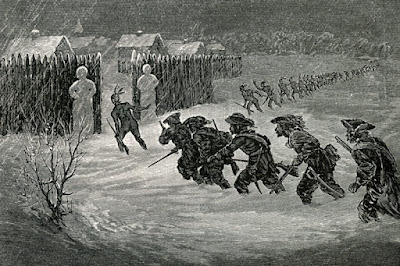 Last night myself and Pierre-Yves got together for a FIW game using Muskets and Tomahawks. I had planned to have a game of "O" Group but I forgot to bring the terrain to Montreal! I did not have a whole lot of time to plan nor do I have a lot of terrain for FIW here, but I made do.
We decided on a 400 point game with the scenario being set in a civilised area. I won the toss and decided to play the French Attacker. My goal was to occupy the settlement with no opponents within 4" while P-Y had to get half the civilians off the table.
French
Compagnie Franches de la Marines Officer
Compagnie Franches de la Marines-2 units of 8 men
Sachem
Indian Veteran Warriors-2 units of 6 men
Milices Canadiennes- 1unit of 6 men
British
British Infantry Officer
British Infantry-2 units of 8
Ranger Officer
Rangers-2 units, one of 8 men and one of 7
Elite Indian Warriors-1 unit of 6 men
Civilians-10 and a priest.
We struggled a bit as we had not played the rules for sometime but after about an hour things got going and we played for about 3 hours in total with P-Y getting a clear victory. The weird thing about the game is although we have played quite a few games it is the first time we actually played in person!
Anyway it was a lot of fun, the ruleset gives a good and challenging game. I will not bother to do a report but here are some more photos taken at the end of the game. 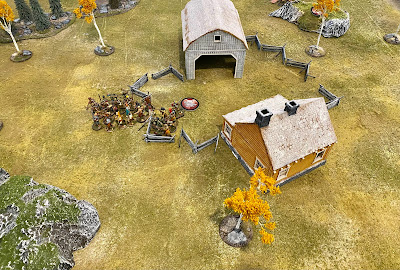 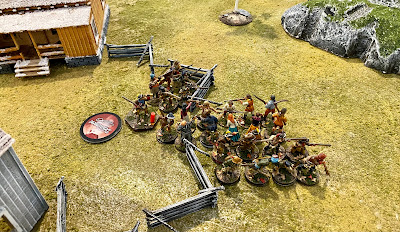 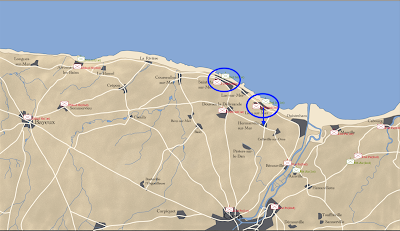 This past week, we had our 2nd battle in the Normandy campaign at Saint Aubain-sur-Mer with German Kp.5.IR.736.ID.716 (zug #2) defending against a platoon from the British 3rdID/2.
Here are some photos of the table set up, we played the 3rd scenario from the CoC main book "Attack and Defend".  In this game the Germans are tasked with defending the regimental headquarters of IR716 just on the outskirts of Saint Aubain-sur-Mer in a walled chateau. This is bocage country, so lots of hidden movement possible as well as hard cover all around. 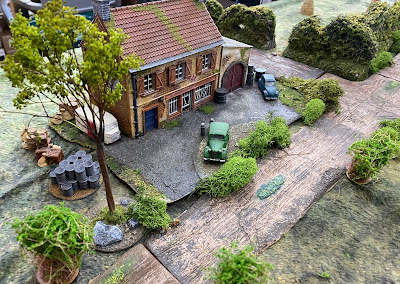