One of the great challenges of WWII skirmish wargaming is the number of buildings one needs. Many of the scenarios we have played have required up to 15-20 buildings. I started with the plastic Italeri which are quite nice but are a little big and also there are only 3-4 different models. I next went to 4-Ground MDF WWII buildings again quite nice and are almost as big as Italeri but again they really have only have one set in 1/72. They are also quite expensive. Both these manufacturers' building are more rural then urban. So the search was on for some inexpensive town buildings I could use. There are some resin buildings out there but they are a bit expensive and a lot of them do not have removable roofs.

A couple of years ago I came across some PVC buildings from Plast Craft Games in their EWAR line. These are very inexpensive 15/20mm buildings that come flat packed and unlike MDF have some degree of relief. They are about €10 each and take about an hour to assemble using superglue. You then paint them and they look pretty good but I found the paint rubbed off easily and they were a little  flimsy. 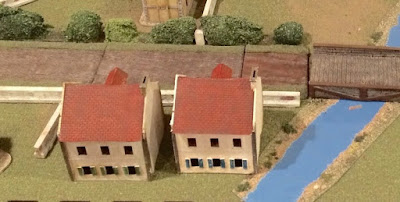 I had painted up 3 of them and had 4 left to assemble and paint and I decided to take a slightly different approach. My aim was to make them a little more sturdy and varied. Also as you can see there were little strips that had to be used on the corners that I found a bit of a pain. I felt the best approach was to apply a textured paint and/or filler. I experimented a bit and the result was certainly I believe an improvement but it did take a bit of experimentation to get it right. Here is the last building I put together. 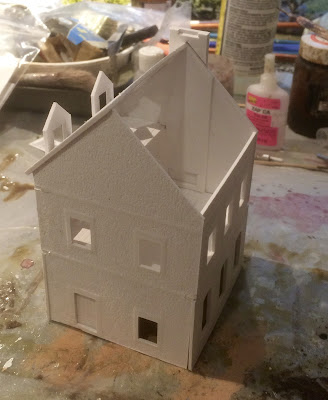 There was mis-steps along the way though as you can see below. I am a pretty rough modeler, a lot of the dry brushing is quite rough and at times over-applied. I certainly could have done a better job keeping the sand off the doors and scrapped out the openings a little better. But pristine looking building never have sat well with me, the buildings are in a battle zone, they should look a little tired and rough. So I am good with it. 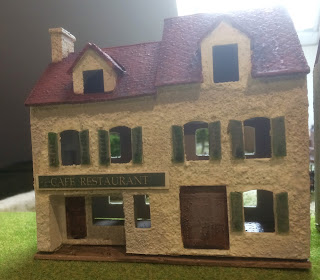 I am quite happy with the result as you can see they are very useful for skirmish wargaming as troops can be easily place inside. The building are certainly now much more durable. 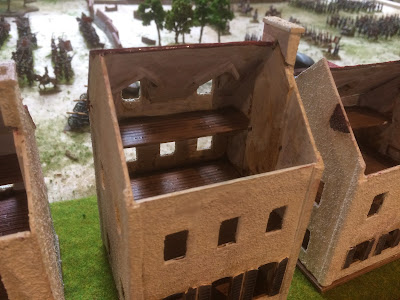 Interestingly enough they now seem to have the same buildings that are pre-coloured, I will have to order some more.
Posted by john de terre neuve at 15:07 12 comments

I know it seems liked I have not been doing much painting but I have, just having some problems with closing the loop recently. Here I present the start of my Revenant faction for SAGA. They are quite unusual in that they are all levy and are not activated by SAGA dice, they do look like an interesting variation to play so I am sure they will see some service in my games with Adam.

I did these figures a couple of weeks ago but did not have the basing done. I am not really big into fantasy wargaming but who says these are fantasy. They were certainly fun to paint. I have 36 more to go but I believe I will save them for The Challenge.

I told myself no more figures primed until I get off what has been already started, these include some 20mm USMC, some 18mm AB Artillery and the other 3 groups of Revenants for this warband. They have only got to the priming stage so I think I will save them for the challenge.

I have some more terrain work to do as well as to base my winter uniformed 20mm Panzergrenadiers which have been sitting around for over a year. I have just made an enormous flag purchase from the Flagdude and have well over a hundred flags to replace on my 18mm Napoleonic army. I also have several new units that I have not photographed yet. Lots to go on with.

Amazingly enough all that is left in my lead pile is some 20mm Australians and some Foundry figures for the new game Congo. There is of course a few residual 28mm Napoleonic figures which are held in reserve in case I need them for Sharpe Practice and some Perry Samurai which I am trying to decide whether to sell or not but that is it.

I am also starting a new CoC campaign in a couple of weeks that looks quite interesting ......... Operation Martlet.
Posted by john de terre neuve at 13:26 8 comments

I know I have not posted much on my blog recently, but I have been away. We have just got back from a superb 2 week trip to Italy which involved a very nice walk through Tuscany. Over the last few years we have favoured more active holidays, having cycled through Languedoc as well as had a walk along the Amalfi coast. This year we decided to go for a nice walk. I had not been to Tuscany for years and Jennifer never has been so it was a natural choice.

I am not a great photographer of scenery or of little painted men but I thought I would post a few photos of our trip. We landed in Pisa from Gatwick after a very short overseas flight from St John's Newfoundland (less then 5 hours). Neither of us had ever been there so why not. The plan was then on to Florence for a few days before we took the train to Chiuisi, our gateway to Tuscany.

Day 1 Montepulciano to Pienza via Montechiello

Day 3 Bagno Vignoni to the Abbey of San Antimo

Rome (where all roads end)

Well it was really a great trip and we are already looking at more walking trips, there are plenty out there. Back to work and soldiering.
Posted by john de terre neuve at 10:52 20 comments