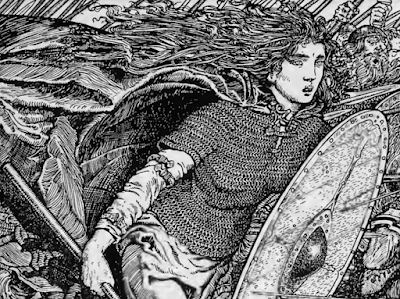 These figures have been on my desk for over a year, I paint "to need" now and I have not played the Viking faction in SAGA for a while so I had no need. But of course this is why the challenge exists....to clear the lead, although in this case we should say resin.

These figures are from Brother Vinni, who really has a superb line of Dark Age figures, his Viking line is largely based on the characters from the TV show The Vikings, but that is OK as they are beautifully athromorphic casts.

I painted up a Shieldmaiden unit from a fantasy line a couple of years ago, they were nice but these are much nicer, so I will suppose the old figures will go on TMP (it really is not much use for anything else).

These were primed white and painted last week in Montreal where I only had, I believe, 12 colours! I did touch them up a bit when I got back to the US and where I also finished the basing. I mostly used glazes here with minimal uses of washes to finish off the recesses. I am improving but still a long way to go. I am pretty happy with the figures aside from the faces which are a little weak. 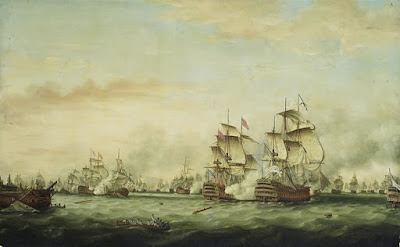 Last Friday we had a game of Black Seas at my apartment. We decided to play scenario 12 from the book, a 2000 point per side battle. This was a pure open seas battle with no terrain with each force lined up on their respective sides on the long axis of the mat. My mat is slightly smaller then the recommended 6x4' by about 6" per side so I believe it played out ok.

I played the Spanish while PY took the British. 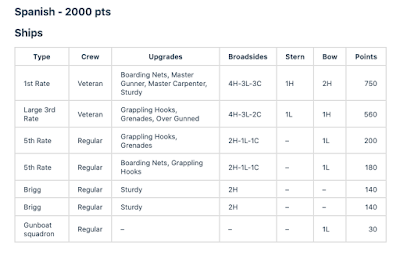 I do not have the actual British list but it did comprise a 1st and 3rd rate as well as Nelson, I think there were 1 or 2 frigates and several brigs. We lined up our ships and diced for the wind, it was blowing Northwest. I will not bother to write out an actual battle report but I did take some photos to deatil the action as follows. 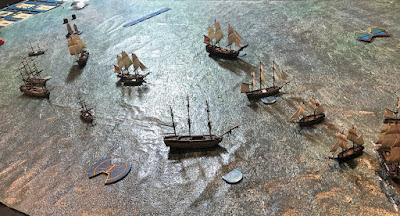 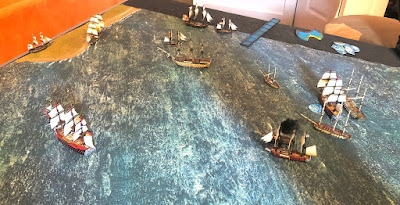 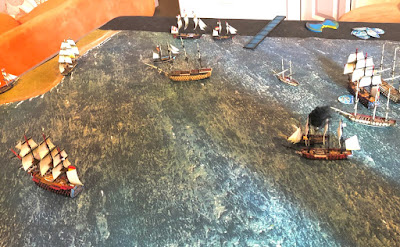 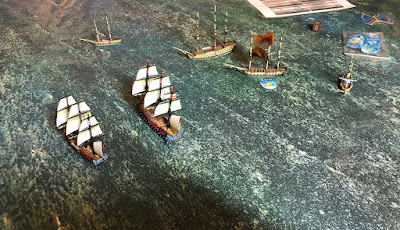 We got 10 of 15 turns in but by then the Spanish fleet was severely tried and I decide to withdraw. We totaled up the points and it was a 20 to 7 British victory. The British are a tough nut in this game and they have a built in advantage because of the modifiers on their skill tests. Essentially with the HMS Victory on the table with Nelson in the third rate, with both ships having veteran crews, they only fail skill tests on a d6 roll of 1. The Purīsima Conceptíon was able to pound the Victory to below it break point but to get the crew to surrender was almost impossble, the Victory shot back and the Spaniards surrendered.

This is a great game and the first from Warlord Games that I have really enjoyed. It is going to take some time to learn how to effectively play the  Spanish as they have some inherent limitations. But that is what gaming is about. I had a lot of fun, as I think did PY.
Posted by john de terre neuve at 07:41 3 comments 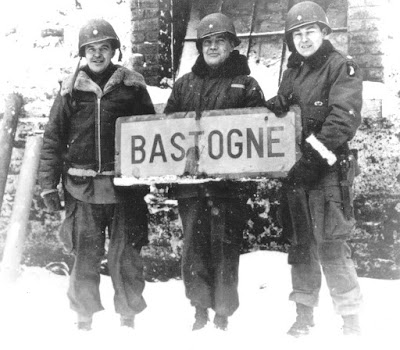 Thursday night, myself and PY started our Bloody Bucket campaign. I am already playing this with my friend Tom but it is such a complex setup I thought having 2 shots at it would be fun. With Tom, I am playing the Americans while with PY, I am playing the Germans. It is also ok, as there is an enormous burden of bookeeping for the American player.

I threw for my first unit and it was a Sturm platoon so I decided to move it to assembly point B, turn 1 over!

This was the game we played Thursday, I felt this was an easier table for the Germans especially if played as the Probe scenario (you have a choice).

This was going to be a bit of a challenge for me as I have not played a Green platoon before, the Alte Kampher rule was going to help though as it reflects the experience of the German NCO's making them harder to hit.

It was good that I got a JOP far up the board but the fact that the Americans have one in the stone house make it tricky. It was made even more tricky by the fact PY did the following.... 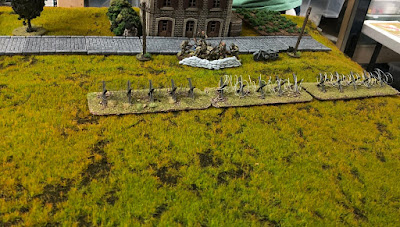 So of course, I had failed to take a wire cutting team but at the same time deploying at the forward JOP  on my right flank was going to be tricky because of Americans in hard cover at close range fireing at green troops! This was exacerbated by the fact that PY got a triple phase and another double phase soon after early in the game letting him deploy almost all his troops. I really could not do much expect to make a diversionary feint to my left flank and bide my time to accummulate CoC dice and to await a double phase..... 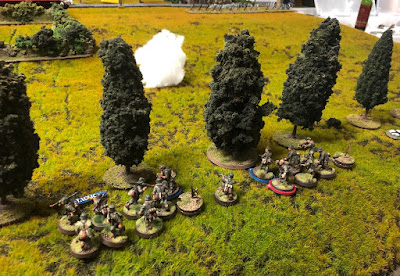 So I placed my LMG team and Sturm team  in light cover and started to creep to the left under tactical movement. I also placed my sniper there, and he was quite successful and picked off an American SL almost immediatedly (I should note that we are using the TT amendements to the rules that I thought worked quite well in respect to Double Phases and Snipers). But of course PY countered with this and the casualties soon piled up..... 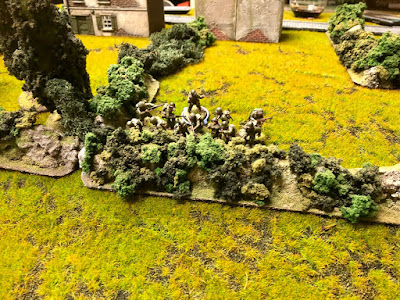 So now it was getting quite late, we started after 8pm and I am usually in bed by 9, so I became impatient, I had a CoC dice but it seemed I would never get a double phase, so I did this..... 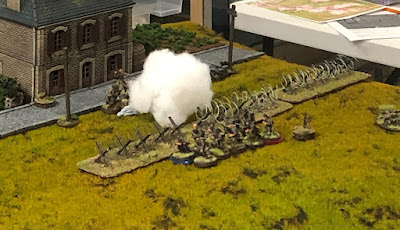 I said hell with it, I plopped down my last Sturm team, with the rifle grenadier team, as well as a SL and my MMG team. I threw 18 d6 at close range, with 7 possible re-rolls on a result of 1. I think I got one shock on the Americans!

I threw a smoke grenade and started my advance around the wire. Got pretty shot up from the Americans behind the hedge fireing at long distance. But I was still mostly intact, I threw a double 6, now was my chance but PY had a CoC dice and interupted my advance with an American squad...multiple casualties, I broke....I withdrew.

So I really got crushed this game, I think I had 17 casualities while the Americans had one. I made several mistakes that hurt me, I placed all my Patrol Markers in one spot as I misread the rules, I should have also readup on the Rifle Grenadier Team, I could have made them pretty effective I had used them correctly and I could have supplied them with unlimited grenades at the cost of 1 support point per man (page 6 FAQ). But I also have to say that PY played a very good game, when you lose just one man you have played well.

The Summing Up: Game 2

Well that will be it until March for this campaign, PY tells me he will have some snow for the the next turn, I will look forward to seeing it.
Update 8-8-20 Plan to restart campaign this Monday, Sturm Platoon 1 will attack Table 2, in second part of turn 2.
Posted by john de terre neuve at 13:05 3 comments 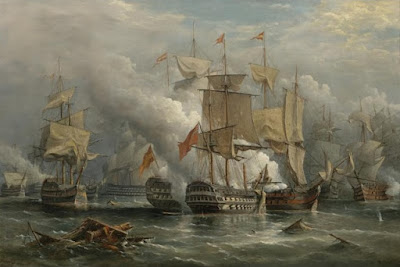 Over the last couple of months I have much enjoyed painting my first Age of Sail miniatures. To be honest, they are the most enjoyable minaitures I have painted in quite some time. In the last few years, my focus has been on gaming and terrain and much less so painting, which in most cases I have been happy to hand off to the professionals.

These miniatures, however, are a lot of fun and once assembled look great on the table. I have also played a couple of games of Black Seas and that has been fun as well. To prepare for a game this Friday, I decided to paint up and assemble (the assembly is the more challenging part of the process) some more ships for my Spanish fleet.

1st Rate (yet to be christened) 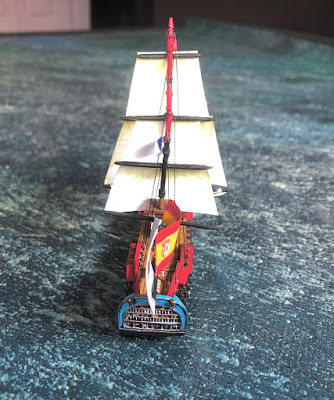 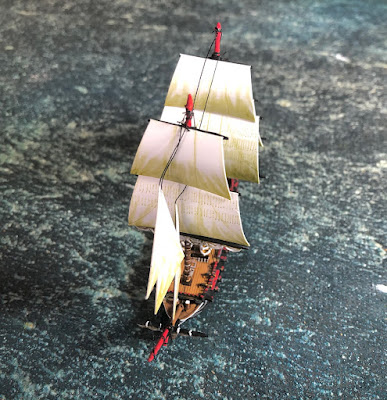 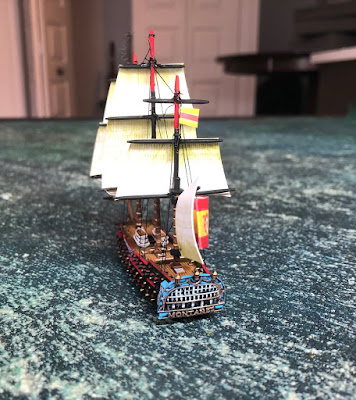 First Game of the Year: A SAGA Encounter in Labrador

Last night, à L'abyss in Montreal, I had my 1st game of the year.  This was my 4th SAGA game with Luis and this time we decided to return to Age of Vikings. Who better to bring than my Skraelings and where better to have a battle than in The Labrador, that previously disputed territory on the border between Quebec and Newfoundland. Enough said on to the game.


So the end of turn 5, we roll the dice.........a 4, one more turn. The Vikings are down to 4 SAGA dice, they take out my unit with the Bear totem, my turn but only 2 SAGA dice. I attack the Viking Hearthgurad and am able to eliminate the unit. I think that over 75% of the figures on each side were lost.....very bloody indeed!

Game over.......it looks very close......using the Massacre point system......a marginal victory is awarded to the Vikings, they won by 1 point!

The game was a lot of fun, I always enjoy playing my Skraelings. So what is next, well a game of CoC tonight in Lachine and back to Black Seas tomorrow here in the Plateau.
Posted by john de terre neuve at 14:39 1 comments

Building up my terrain collection, although I am not really sure what to do with the bunker compound. The STL files are from 3D Print Terrain. They are good quality and the author responds almost immediately to any enquiries on facebook. 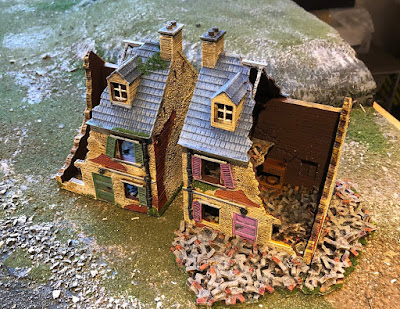 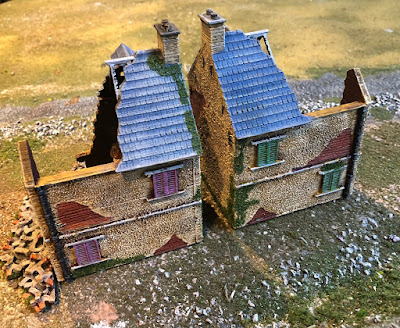 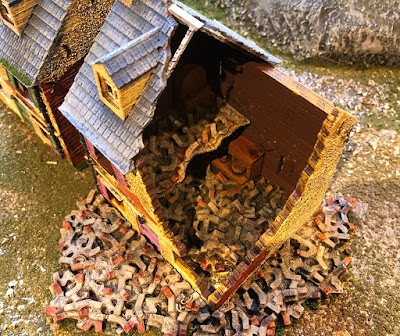 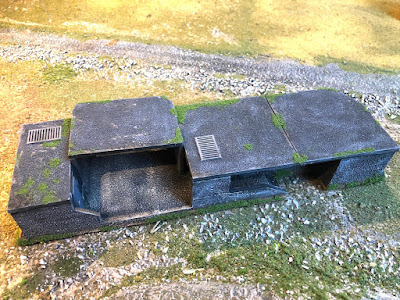 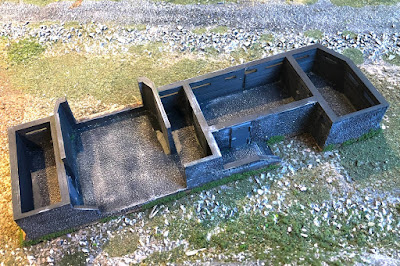 Next up on the printer is the Saint-Mère Église!
Posted by john de terre neuve at 08:11 5 comments

For the last 3-4 months, I have been immersed in the world of 3D Printing. I started with terrain to learn the skills needed to utilize this technology but over the last month I have been experimenting with printing vehicles on a FDM printer. It is quite a challenge and I will accept that a Resin techonology is probably the way to go here. However, I still believe that for wargaming, FDM vehicle prints are a good option.

I recently had an EW CoC game and my opponent was playing the Belgians and decided he wanted to take some French tanks as supports. Well I have no French tanks as I do not have a French force (yet) so we had to use some substitutes. Not an ideal choice and this can be a little more difficult as vehicles are hard to find for some of the more minor nations (no offence to the those nations of course).

But in the 3D Print world this is not the case, and with a bit of googling I found several different STL files for French tanks. The tricky bit is how to print these STL files, as it is not a case of just hitting print. Problems include what type of supports to use, how do you orient the vehicle on the build plate ( I have tried flat on the side vertical as well as on a tilt all with different degrees of success). My prints have improved but I am still not even close but I am hoping you will agree they are ok for wargaming. Enough blather, time to move on to photos. These were my 2nd submission to the AHPCX. 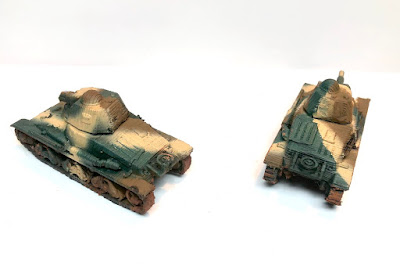 As you can see the striations on the models are quite a challenge and although these were all painted with an airbrush there was some runoff and spidering.
Posted by john de terre neuve at 07:44 11 comments