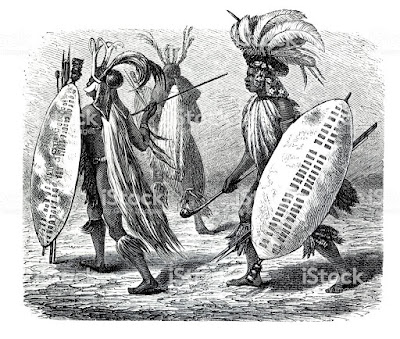 One of the last piles of 28mm lead, I have are the figures I bought for the game Congo, which I have yet to play. I painted up the Explorers box in a previous AHPC, but still had the African Kingdoms box. I have a very small lead pile and to be honest all I think is left is some Perry Samurai figures.

Certainly I have some plastic and resin figures lying around from some games like Mansions of Madness, some Games Workshop figures and a few Carnival figures. Hopefully I will get to play the game soon. 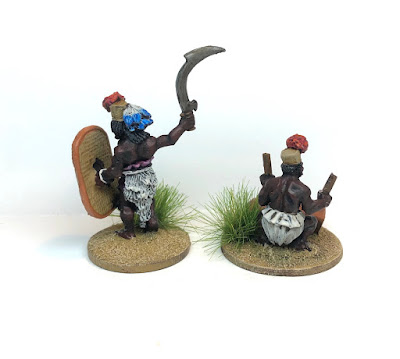 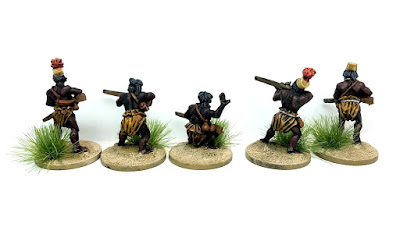 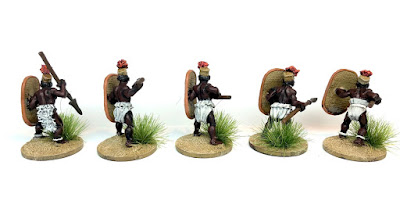 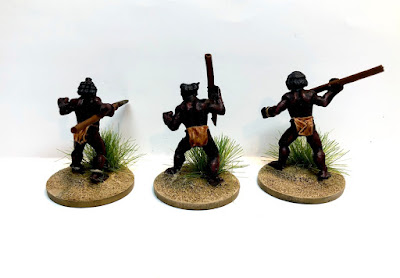 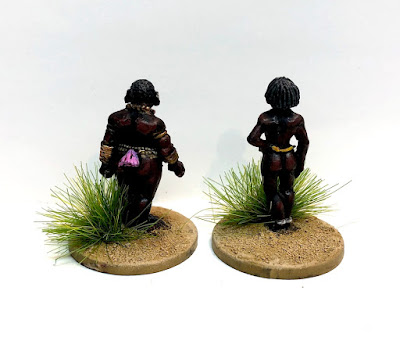 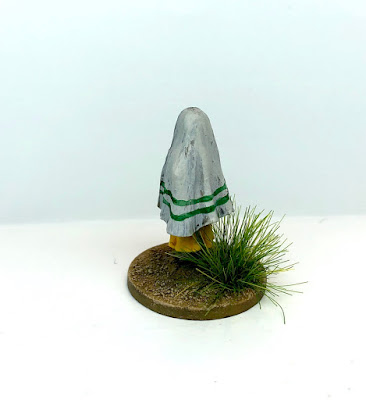 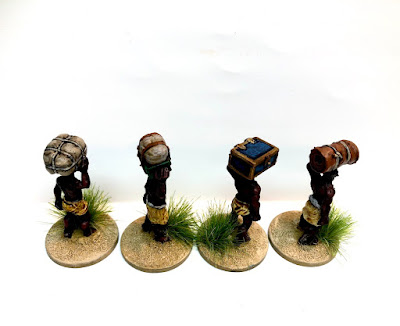 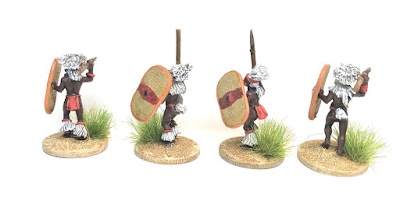 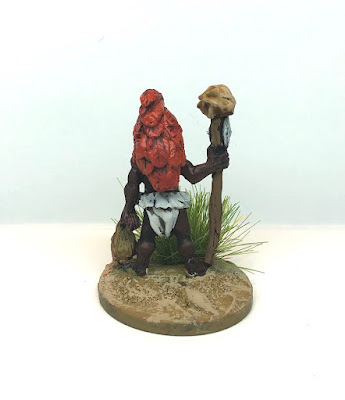 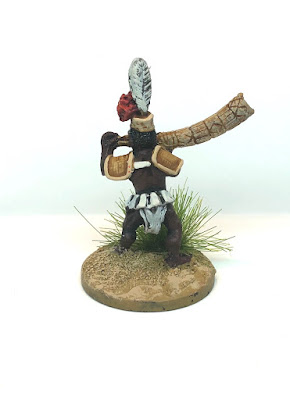 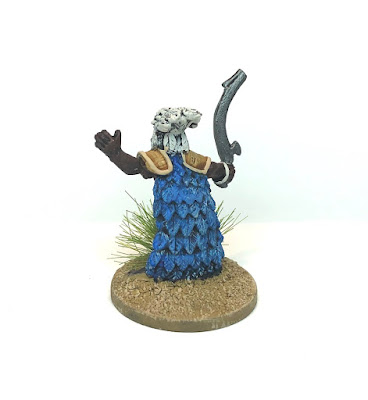 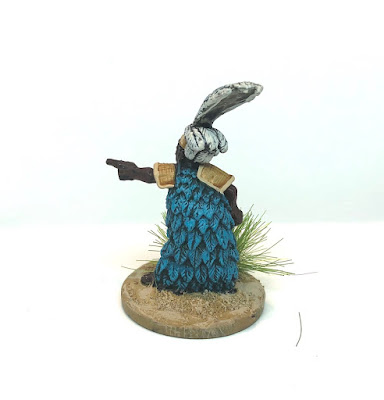 Nice to get them done.
Posted by john de terre neuve at 07:04 5 comments 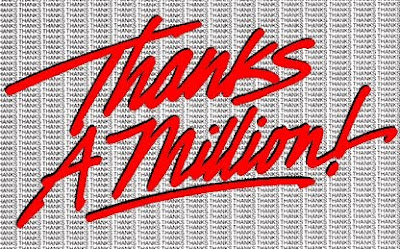 I need some train tracks for several Chain of Command games that are coming up and it has been something missing from my collection for awhile. I could have gone with 3D prints, as I have several STL files which look quite nice but it does take a lot of time to print something like this.


I was going to buy some real HO track but found some very cheap plastic tracks on Amazon and I got some rail bed from a Train Terrain company. The whole thing was less then $30 and I probably have another 8-12' of track materials still left but what I needed was a something to cross a 6' terrain table. 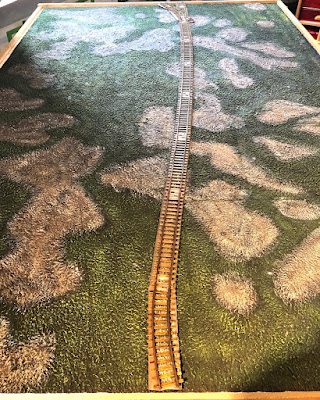 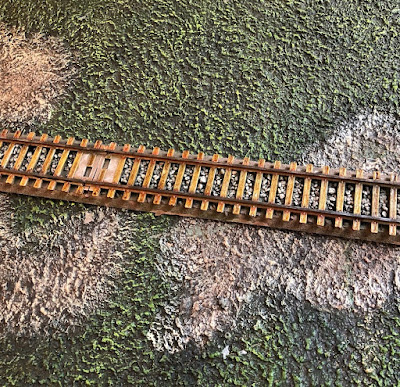 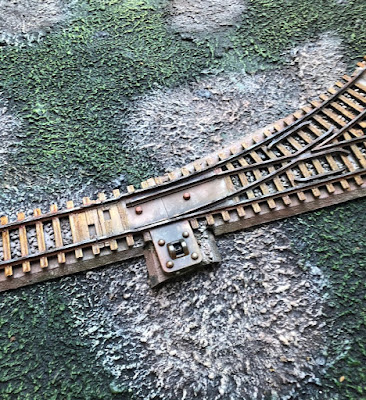 It was a bit more work than I thought it might be. The track was a little too wide for the bed but I plan to improve that when it is set up with clumping foliage. I used PVA to glue the track to the bed which is some sort of foam and then sprinkled the ballast on the wet bed, it was not really the best method but with some repairs I moved on. Once dry, I airbrushed the whole thing with black, followed by a green brown followed by a light brown. I then drybrushed the whole thing with a light sand colour. I then washed the rails with black followed by a drybrush of a dark metal. I then used a brown ink from Scale Colour to paint the wood, which really worked quite well. I finished off the tracks with a rust wash. 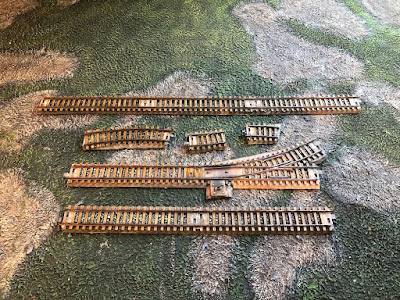 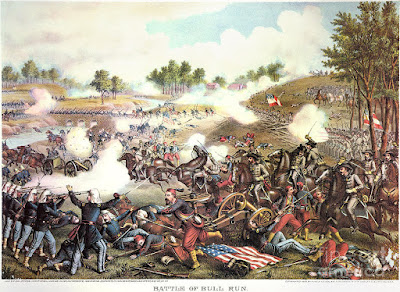 Last Friday we finally got in the first game of our ACW campaign, our 3rd return to Bull Run!

As usual I completely forgot to take photos but as you can see I set up 1 brigade to take the confederate left flank while advancing my other brigade up the centre. It was going to be a difficult victory for the US forces as they had 8 turns to get more undispersed units within the fenced area on Henry's Hill then there were confederates. My initial probes went well and I was having pretty good luck with my firing and initiative rolls but as the game progressed my dice rolling failed and there was not one time when I got 4 possible ADC's out of 4 in the whole game. I believe I got 3 once, but most of the time I had only 1 or 2! I ended up taking a pretty good pounding and as you can see below I lost quite a few troops. 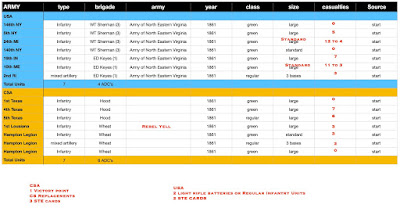 I have to say that I really enjoy playing this ruleset, it is a lot of fun and once you get going the game goes quite quickly. I think we finished 8 turns in less then 3 hours. I am already looking forward to our next game.

Click for a downloadable pdf of our ACW Campaign.