Exporting Devil in the Wilderness 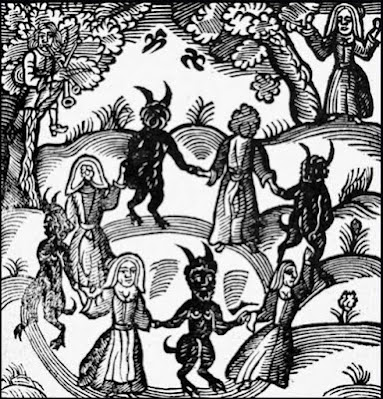 Ten days ago, I had my last game of 2021. It has been a great year for wargaming with a record number of 67 games played. Most of these were of course virtual but I have grown to enjoy these games almost as much as those played in person. I have cemented my relationship with my friends in Finland, started the year playing virtually but ended up getting four in person games with Pierre-Yves, Iannick and Luis in Montreal last week, as well as got a few in person games with my friend Adam here. I seemed to have lost touch with three CoC players locally which is a pity and I have really not been able to get much going at the local game store.
I recently played a very interesting short campaign based around the first day of the Soviet invasion of Finland on November 30, 1939. I am waiting for Eero to post his excellent battle reports which I will pass on from here when ready.
Anyway enough of that. I was quite keen to bring what I think is a great game that was developed locally to Montreal, so 10 days ago I set up a Devil in the Wilderness game for my friend P-Y at my new apartment there. This was an inaugural game for my place in the Mile End neighbourhood and the first of what I hope will be many games. I have transported quite a few figures as well as terrain there in preparation for my semi-permanent move there in just 6 months. I am looking forward to getting back to my native land after what will be almost a 25 year absence.
So on to the game, as I have previously noted I had a recent learning game with Dave Valentine, the creator of Devil in the Wilderness, so I was pretty confident in hosting the game. I perceive that the Witch-Hunters lead by Cotton Mather have a bit more oomph than the Witches so I gave this faction to P-Y. I had transported all the specific terrain for the game much more easily than I thought so you can see the layout below.
Well it was a bit of a strange game as the Witches got to deploy first, unfortunately they did not get down with a many initiatives or good cards so when the Witch-Hunters deployed in an adjacent location with great cards and a large number of initiatives, two of my supporting character got killed in the first 2 turns of the game. This really put the the Witches on the back foot and despite another 60 minutes of play where unable to recover enough to prevent Good from prevailing on the game counter.
Despite this it was a fun game and I will be surely replaying it again the next time I am in Montreal. we were left with very few questions about the ruleset but I understand that Dave will be soon publishing an errata for the ruleset. 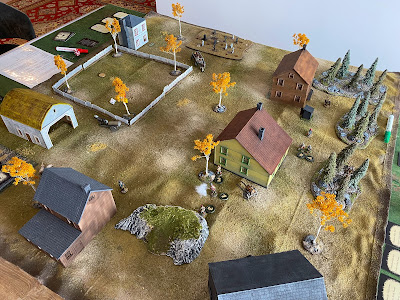 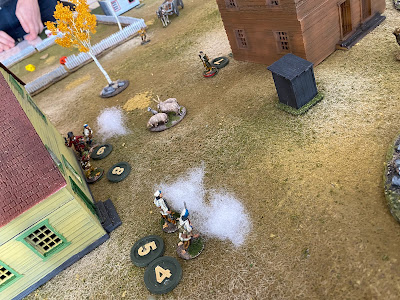 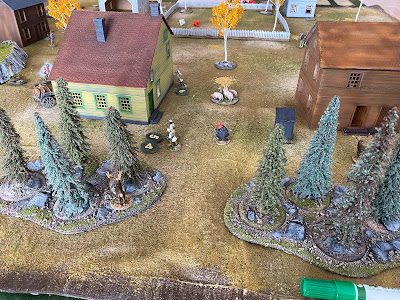 Labels: Devil in the Wilderness, Montreal