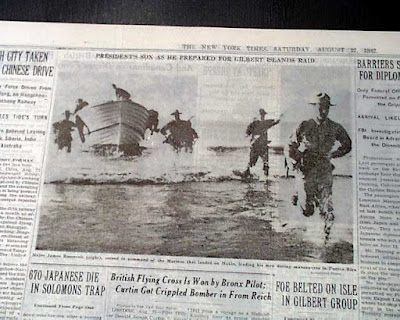 Despite some of our players not being able to play, we had our next game in our Gung Ho campaign yesterday. We had Mikko and Eero for the USMC and Petri for the IJA, I am hoping that Jarkko a new IJA player will be able to play in our next game. As usual we played on Discord and it remains an excellent choice for online tabletop gaming. 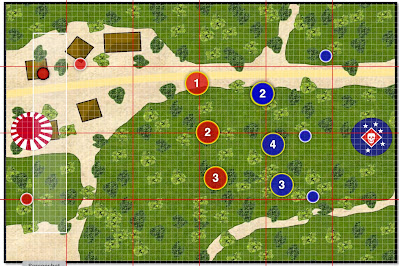 THE ACTION
There was no surprise that Mikko went with a new platoon, unfortunately Petri only has one platoon for the campaign, so he dropped a full infantry squad and removed a man from each of his knee mortars teams. Having taken the wild card Leathernecks was going to be an enormous advantage in this game for the Raiders as their victory condition required them to capture the JOP in the shaded area and end the turn with one of their CoC die.
The Raiders started off quite aggressively placing 2 of their squads with one of their SL's down south of the road in the first couple of phases and advancing them towards the collection of huts. They quickly followed with with a third squad advancing tactically and once to the jungle edge went on overwatch or laid covering fire on some of the huts. The IJA refused to deploy which is usually a good idea when being the defender. 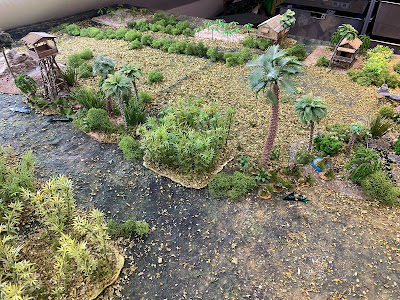 Mikko's dice throwing at the end of the game gave very little chance of Petri replying to the Raiders advance in any meaningful way. Three double phases in a row with 1 to 2 CoC dice in hand is a commanding position for any attacker. So on to table 4, hopefully next Wednesday.
Butcher's Bill
There was not a shot fired, so no men lost. The USMC will go into the next game with an intact squad while the IJA will be down 13 men.
USMC (platoon 2)
Final FM 9
CO +5 (+1 support)
MO 0
Platoon Leaders Outlook Sociable (+1 FM)
IJA
Final FM 9
13 dead
CO killed, no further tracking.
MO 0
Platoon Leaders Outlook Merry
Posted by john de terre neuve at 10:53