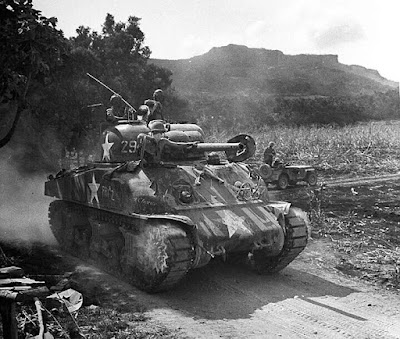 Last night, we had our 6th turn in the Saipan campaign, but only the 5th turn on the campaign clock. This was "The Probe" scenario from the main rulebook. This I felt would be the toughest game in the campaign for the Marines to win so I had to be on my toes. We made a slight error in our last game as I believe I was supposed to bring on my 2nd platoon, so for this game I had a complete platoon.

USMC (FM 11) (+3 on FM roll)
6th Marine Regiment
Type F USMC Platoon #1 (2 men missing)
2SL
3 Infantry Squads with Sup JL and 12 men
Supports (12)
M4A2 Sherman (7)
M3A1 Stuart (5)
Japanese (FM 11) (+2 on FM roll)
136th Infantry Regiment
Type B Infantry Platoon #2
2 SL
3 Infantry Sections with Jl and 12 men
Grenadier Section with JL and 12 men and 3 50mm Mortars
Supports (7)
Minefield  (1)
Tank Hunter Team (2)
4.7cm Type 1 ATG (4)
So on to the game:
I had a pretty good idea that P-Y would go with at least one tank but I was a little surprised that he went with two. I was quite happy that I took some good AT support, the Tank Hunters were going to be key here as I had 2 JOP's close to the hedge with both of them less then 6" away allowing the TH team to deploy on the far side of the hedge.
The Marines got the first move and of course P-Y threw a double phase which is a real gift when you are the attacker at the beginning of a game. He put down the Stuart first and then the Sherman in his second phase, while advancing the Stuart quickly up the table. I decided to hold off until I got a better idea where the tanks would attempt to breach the hedge (major obstacle). The Stuart made a right turn and it appeared clear that it would attempt to cross at the southern point. This worked out well for me as I had to reserve the Tank Hunters for the Sherman. I deployed my Type 1 ATG with a strike of 6 AP and it was able to knock out the Stuart (armour 4) in it's first shot. Things were looking good, but in the next phase the marines deployed 2 infantry squads to fire at my ATG on the hedge ( I really should of put them down with an IJA Infantry squad to share hits but I forgot). I believe the 2 squads got a total of 16 hits, my saves were pretty good with a shock and a kill but I rolled a 1 for the leader hit and the JL was taken out for the rest of the turn.
IJA phase, I rolled a 4 and deployed a SL off the hedge and pulled the ATG off the hedge. Time to reorganise as I knew the Sherman was about to crash through the hedge on my right flank. I turned my gun to the north and deployed an infantry squad with it. Marine phase....P-Y rolled up a 3 and made a fast diagonal move towards the hedge and out of LOS of my gun. He crashed into the hedge. One more move and he would be very close to my table edge thus winning the game. My throw, finally the dice gods had favoured me....I threw a double phase. The ATG was wheeled about into LOS. I threw my second phase, a 4 with a 1, it was looking good. I got 2 net hits, driver killed, 2 phases to change, 2 shock. Time for the Tank Hunters, deployed on a 1. Went to the flank of the Sherman, staying out of the overwatch of the marine infantry, set the satchel charge. Three net hits, P-Y threw a 5, the tank blows up the Tank Hunters are killed....a true Bonzai charge! The Marine FM falls to 7, they withdraw. Finally a Japanese victory.
It was a short game, maybe around 90 minutes. I was happy to win finally.
Butcher's Bill
The post game calculations were quite easy as no men in the core platoons were lost on either side.
USMC
Final FM 7
2 down for next game (platoon 1)
CO +2
MO +6 (+2 on FM roll, Platoon Leader 12" CR)
Platoon Leaders Outlook Content
IJA
Final FM 9
0 dead for next game (platoon 2)
12 dead for next game (platoon 1)
CO +1
MO +1
Platoon Leaders Outlook Assured (+1 FM)
On to some terrific photos from the camera of P-Y.... 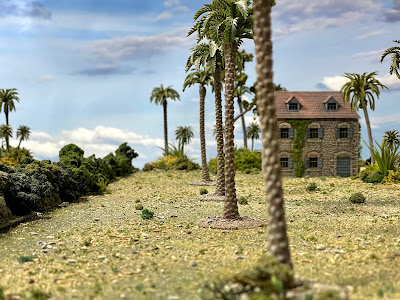 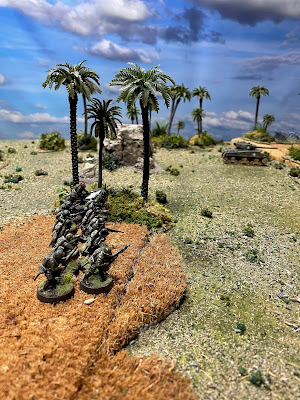