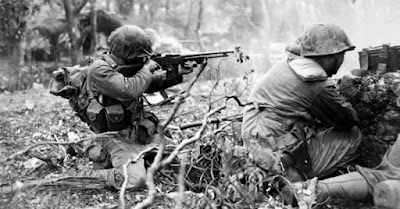 Last Thursday, we had our 4th turn in the Saipan campaign. We were back to remote gaming and this game was a Wild Card for the Japanese. Two completely fresh platoons were placed on the table in a IJA counterattack on table 3. This game did not advance the campaign clock but could force the marines to re-take Table 3. This was a night attack so night spotting rules came into effect. To counter this the marines could fire Star Shells to illuminate the terrain. It was an interesting game.
This was the "Flank Attack" scenario from the main rulebook, so the IJA get to start on both the eastern and northern edge of the table. The game was going to have been won or lost depending on morale failure or withdrawal. 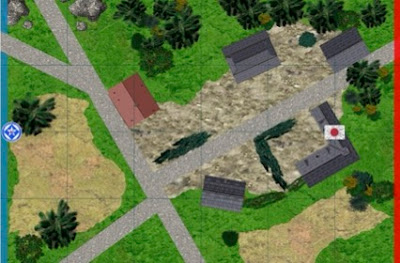 USMC (FM 10) (+4 on FM roll)
6th Marine Regiment
Type F USMC Platoon- Fresh
2SL
3 Infantry Squads with Sup JL and 12 men
Star Shells
Supports (6)
M3 37mm ATG (3)
3 x Entrenchment (3)
Japanese (FM 9) (+2 on FM roll)
136th Infantry Regiment
Type B Infantry Platoon-Fresh
2 SL
3 Infantry Sections with Jl and 12 men
Grenadier Section with JL and 12 men and 3 50mm Mortars
Red Dice
Pregame Barrage
Supports (9)
Chi-Ha Tank (5)
MMG Team (3)
Entrenchment (1)
So on to the game:
I felt I had a good chance of winning this game, I had a pregame barrage as well as a red dice. I was finally appreciating that the way to defeat the marines was not by trading shots at each other across the table squad versus squad. With the re-rolls and 13 man squads I was never going to win. I either had to bring at least 3 squads to bear on each marine squad or engage them in combat as the Japanese are aggressive in this campaign thus adding significant dice to the combat.
Unfortunately, the night fight rules made firing quite difficult because of the spotting rule. I had to get close and get the marines to fire thus increasing my spotting distance by 12". With JOP's being were they were clearly I was going to have to launch from the north. The good news was that I had a road on this edge because so my Chi-Ha tank was fairly close to the USMC JOP's. I placed the tank on the road and immediately deployed an LMG squad and a knee mortar squad. I placed the knee mortar squad in an entrenchment so they could go with a sustained fire in heavy cover. A SL was placed to be able to command both units. The trick here was to spot the marines who had gone down in the field in an entrenchment as they were between 20 and 30" from my squads. I used my tank to this as well as advancing the MMG team into the wooden house.an
P-Y deployed is ATG in an entrenchment, and started to fire at the Japanese tank, they were able to hit but I believe my defence throws were generally successful, but I lost my main cannon. I used my Knee Mortar squad to lob smoke at the gun, was quite unsuccessful until my 3rd shot. By now, I had deployed my 2nd LMG squad from the eastern edge, and they were able to advance up my left flank towards the US JOP in the house.
The game was now turning my way as I was able to wound the US SL in the entrenchment causing a morale loss of 2, I then captured the western US JOP with the tank. My 2nd squad captured the the US JOP in the house. P-Y threw a triple 6, turn end, more morale loss for the US, they were down to 4. My Chi-Ha was now 1" from the southern US JOP, I had a full CoC dice. P-Y withdrew as it was inevitable that in the next turn that I was going to force another morale test.
It was not the most exciting game but I did win, thus forcing the marines to retake table 3. The dice did favour me in shooting but I never got a double phase in the whole game and P-Y only got 2, at the end of the game. P-Y was quite clever in that he never deployed 2 squads thus his men lost were quite low, thus preserving his MO for the next game which will be tonight.
Butcher's Bill
USMC
5 figures killed
Final FM 4
CO +2
MO +6 (+2 on FM rolls, 12' Command Range)
Platoon Leaders Outlook Content
Japanese
2 figures killed
Final FM 9
CO 0
MO +2
Platoon Leaders Outlook Secure
On to some terrific photos from the camera of P-Y....