We connected yesterday for our third game in our Gung Ho campaign, We have played 2 games so far with each side having a victory. This was a replay on table 2 where the Martine Raiders attempt again to advance. This is "Attack and Defend" scenario from the main rulebook. Unlike the first game on this table, the Raiders do not have the option of winning by destroying the Radio Tower. 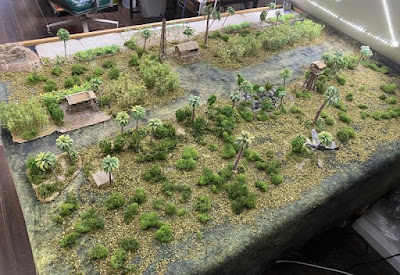 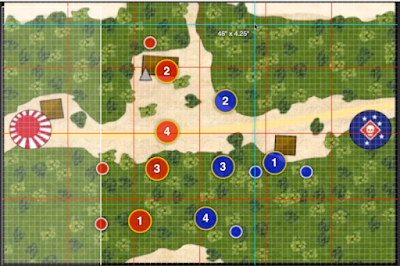 The Action
Death of Kanemitsu, Lt Peatross operating behind Japanese lines has managed to take out the Japanese military commander on the island. Because of loss of leadership, the IJA come under a Pregame Barrage to reflect this.
So much for best laid plans! This was quite a good game. The IJA had the higher FM, they lead off by placing their green squad in the previously placed entrenchment. I should also note that we have a new SL for the IJA ( I believe he spent the first 2 turns in a Geisha House, but only drinking tea I have been told). Welcome to Jōtōheisō Kaapo. The Raiders deployed their green squad (extra BAR's) on their southerly JOP in an offensive posture (commanded by Plt Sgt Eero). Kaapo countered by placing his blue squad under command of Nitōheisō Petri in an entrenchment directly facing the Raider green squad. Lt Mikko counters with his blue squad. I should note that the PGB had little effect on the initial IJA deployment. 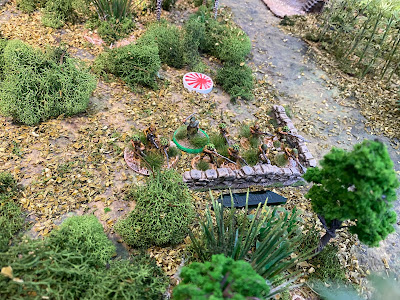 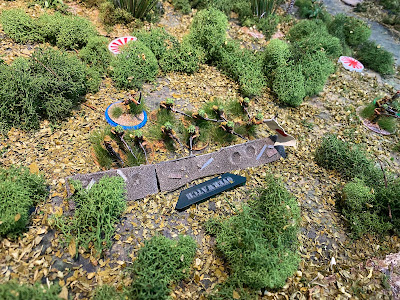 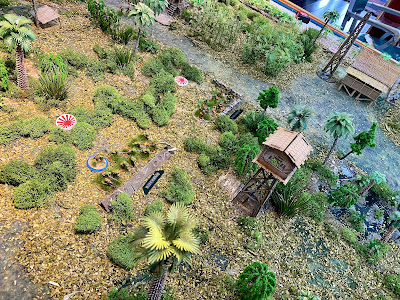 The IJA are on overwatch, they kill 3 raiders in the green squad, Lt Mikko retaliates by calling up the Nautilus, they aim perfectly without an aiming shot and land with a 10" circular mortar strike (we use the TT modifications) covering half of both the green and blue IJA squads. Lucky they are in entrenchments and there is little effect. 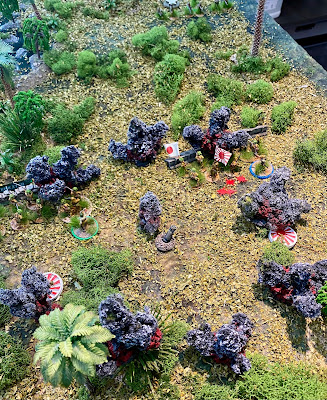 At this point, the game becomes very aggressive with Lt Mikko launching his pink reserve squad in combat with the IJA blue squad who now have significant shock. They look weak, but they are entrenched. Has he mis-calculated? 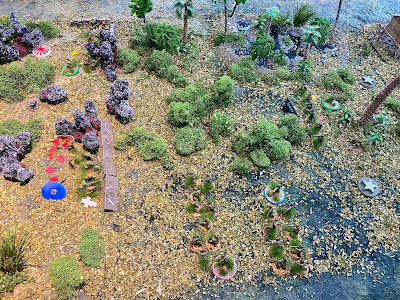 The Raiders take the bunker and break the blue IJA squad, FM is falling on both sides. The IJA are down to 6 while the the Raiders are still at 8. There have been very few double phases and I believe only a single pip on a CoC dice.
Kaapo, the IJA commander has to make a big decision now. The IJA have only 1 platoon for this campaign while the raiders have 2. IJA blue squad is down to 4 men and breaking. Should he withdraw? The IJA SL's confer in a private chat channel, they are still under a PGB, should they attack or withdraw. A decision is made to counterattack. The attacking Raiders are in the entrenchment but on the wrong side, they are in the open and have suffered significant attrition.
The IJA throws a 6, 5, 4, 3, 1. They have no SL's on the table and their yellow squad is in reserve, the Marksman has yet to be deployed. Will they get through the barrage. Kaapo rolls for the marksman, he fails to deploy. Should he go with the SL or the squad first. He rolls for the SL, he is successful. The SL orders green squad who are 5" away from the pink Raider squad to attack. They engage, again it is close but they break the Raiders who stop just short of the table edge. 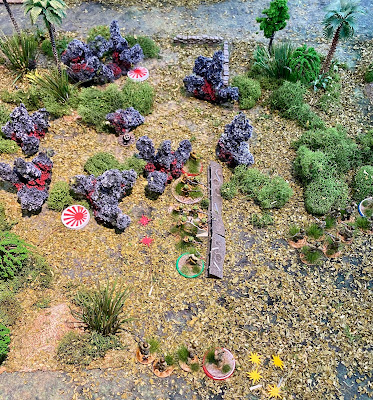 Kaapo still has a 3 in his hand, will the 3rd IJA squad arrive, he rolls a success. The pink Raider Squad are wiped out, the Marine FM drops to 2. Game over.