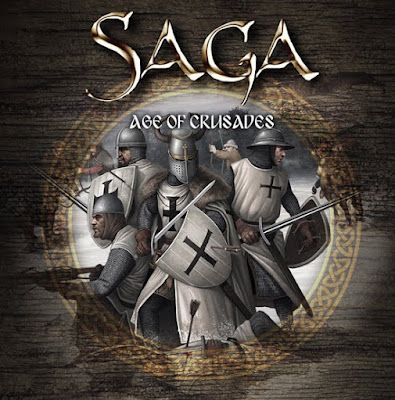 I played my first game of Age of Crusades last night at L'Abyss in Montreal. Had a great time and met a new gamer Luis F. who has a great sense of humour and was a lot of fun with whom to game. He appears to be quite an experienced gamer and had some great looking figures. L'Abyss is quite a gaming shop with a lot of fantasy figures but also some Bolt Action, Flames of War, Gripping Beast SAGA books, dice and figures and an enormous selection of multiple brands of Fantasy miniatures. They also have a lot of terrain and gaming supplies available including paints from Vallejo (superb Model Air collection), Citadel, Army Painter as well as Scale75. They also had a lot of mdf terrain from a Quebec company called XOLK, which I will have to explore further.

The gaming area was quite impressive with I think 20-25 tables, all sit down with an enormous selection of terrain tiles, mats and terrain to use. The place was blocked (this was a Tuesday night) with all tables in operation. They even had specialised 4x3' SAGA boards. Very nice.

We set up using the Book of Battles Chaos method, Luis was not familar with this game setup as the  French version of the BoB has not yet arrived in Montreal.

I could tell pretty quickly that this was going to be a challenging game, I was quite unfamilar with the Saracen BB and seldom play mounted warbands. I was helped though by the fact that the special rule Forced March limits movement to half of normal in the first 2 turns, and we had a 5 turn game because of Cautious.  So on to some photos......
So we totaled up the Massacre Points and it was 25 to 23 for the Saracens, a very close game. It was a fun game and I look forward to the next. It was the first outing for my Moorish figures since I painted them several years ago, it was nice to see that they won their first battle. More importantly of course, I have met a new gamer in Montreal who was a fun and engaging player.
Posted by john de terre neuve at 09:47