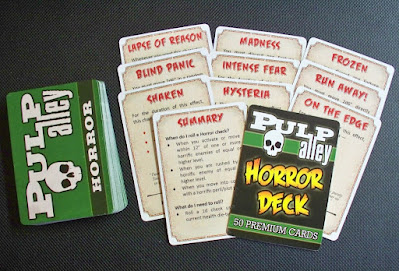 Last Sunday night, I went to Luis's for a game of Pulp Alley. This was my second game, but the first was a virtual game with P-Y so I was looking forward to pushing about the figures myself. It was also the first game that I had a chance to get some of the multiple figures on the table which have never seen action.
I am not sure of the actual scenario we played but as you can see the game was set in the sands of Egypt. Luis's terrain is really quite amazing and the gaming aids he has were really well done. I am not 100% sure what league Luis was using, but there were a lot of women and one automaton, his leader was from a French Graphic novel. He also introduced horror into the game which was a lot of fun.
I put together a Baker Street League but also added Dr Jekyll and Mr Hyde for a bit of fun as I wanted to see how a shapeshifter worked.
I am sure a lot of you will recognise these figures from the Empire of the Dead collection from Westwind. They are great figures and I have quite a few more which I can use for Pulp Alley. I have a lot of the Villains from the Victorian Age, as well as a nice collection of Tong leaders and gang members. Here is my league sheet.
So we set up the game and off we went.
I really had a great time with this game and it was nice to win. I might need too make some adjustments to my Character's Abilities, but I thought they over all worked well. I will definitely use them again. I should also say that Luis made some excellent tacos, I will look forward to my next game of Pulp Alley.
Posted by john de terre neuve at 11:07