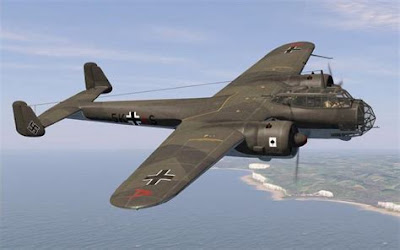 This past Monday myself and Pierre-Yves got  in another game of Bag the Hun using the Finest Hour campaign generator. We played for almost 3 hours, we got in 6 turns. The game of course is a little slower as P-Y has to move all the figures. We seem to be doing generally well with tele-wargaming, we have now used Zoom twice which definitely gives better stability and image quality over google hangouts. Still struggling with using OBS on both sides though. Zoom supposedly has the capacity multiple participants to share multiple screens on each side but we are finding we can not get it to work properly. P-Y has the game set up on his side, I have just been wanting to add a dice tray on my side but still no success.

The OB is as above, this time I payed the Germans, I had 6 Do-17 bombers and 4 Me 109's. Trying to stop me was a flight of 6 spitfires in 2 sections. Here are a few photos of P-Y's beautifully rendered planes. 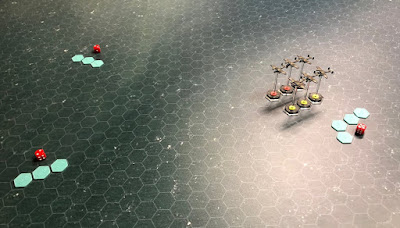 Both sides lost planes, I believe I lost 2 bombers and 1 Me 109, while I took down 2 spitfires, I had to work the next day and it was 2330h so I had to call the game, I believe I would not have made it off the table with my bombers.

I like Bag the Hun, it is a lot of fun but I am starting to find the Finest Hour campaign is somewhat un-exciting. There is no real specific goals in each of the scenarios, you are told what you have to fight with but it then seems that the only game is to destroy the others planes. I think it would work better is something like "the Germans have to get 4 of 6 of their bombers to the coast and they win" or some method of calculating victory points. I appreciate that the goal for the British is to preserve pilots and planes and through out the 4-5 months of the campaign for the pilots to rise up through the ranks and gain experience. It is a pretty slow process and there is not really any tracking from the German side. You can of course set up the campaign from the German side but than of course it is the British that are passive. I voiced this to P-Y and I believe he feels the same, but the good news is that there are multiple single scenarios and some short campaigns within the TFL specials. So lots to enjoy yet with this fun ruleset.

On a personal side, I am still waiting for my planes to arrive from Tumbling Dice, it should be any day now. I have the paints in place and was just notified that my flight stands from Litko are on the way. My hexed mat is all ready so we should see some EW North African airwar soon.