My initial attraction to SAGA was the Skraeling special pack. Suddenly I could play out a game that was set in my native land, Newfoundland. I like wargaming with some basis in history, so as I have detailed in previous posts my plan was to set up a campaign set in Vinland to recreate the encounters of the Greenlanders with the Skraelings as detailed in the 2 Vinland Sagas. About a month ago myself and Nicolas at Nowhere to Lead Soldiers got in a brief test game set in Vinland. Nicolas appears to have been quite taken with the story as he has written a SAGA campaign with several linked scenarios for Vinland. I suspect he will soon be detailing them on his blog, so I will leave that there for now.

In my reading of the Vinland Sagas (the Saga of the Greenlanders and the Saga of Eric the Red) the character of Freydis Eriksdottir caught my attention. Here was a character who not only fought the Skraelings but also massacred her own people. Just perfect for scenario writing!

So started my search for a 28 mm figure that I could use for Freydis. Unfortunately, most female Vikings available were Valkyrie types, and this did not really work for me. Then I got a lead to some new figures from Bronze Age Miniatures. Here were some non heroic figures that were just ideal for how I envisioned Freydis. 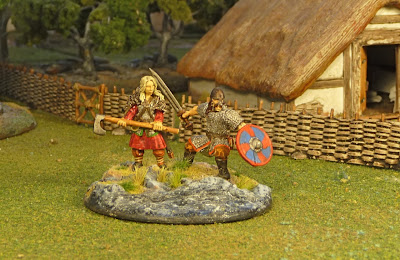 I have placed her on a 60 mm stand that I am using for SAGA warlords and as as been my plan with warlord stands 2 figures were used. Both figures are posed at the edge of a stream. It looks like they are about to confront some Skraelings or maybe some other Vikings. 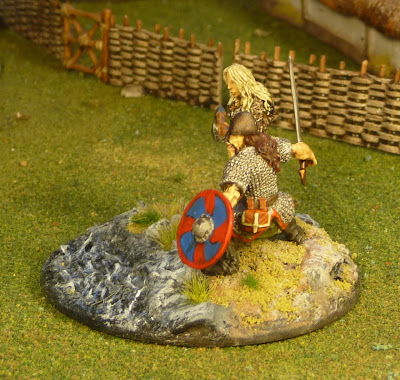 I have used some Woodland Scenics water effects to replicate a stream. Not sure how successful this was, maybe I should have used more. 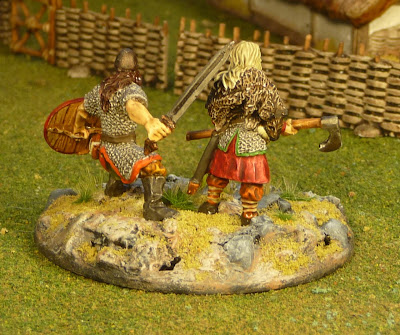 Still a little shiny, the matt has not completely dried. 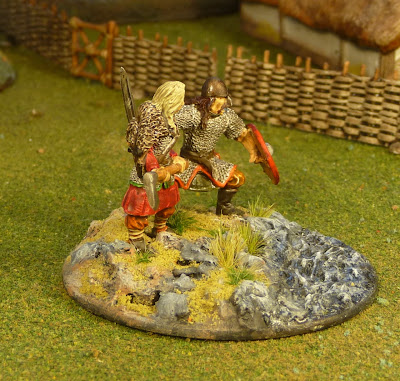 Anyway she is a nice addition and I am really looking forward to getting a chance to play Nicolas's Vinland campaign.

Anyway here is where I need some help, I am pretty new to SAGA, so I wonder if anyone could suggest some special rules for Freydis Eriksdottir. I do not think that she should have special armour rating or fighting ability, but more so a special ability to do with cunning and maybe should we say feminine wiles!