I finally finished the final 2 starter units that I purchased in June. These are both 4 point war bands, and are what is recommended to learn the game. 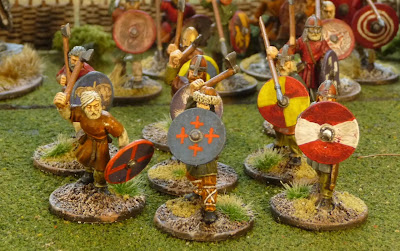 First up is a 8 figure Viking Warrior unit. I used axes for the weapons in 7 out of the 8 weapons, but I found for some of them that the pose looked a little odd and maybe I should have used javelins. I will have to fix the shield to the left not sure how it got smeared with red. 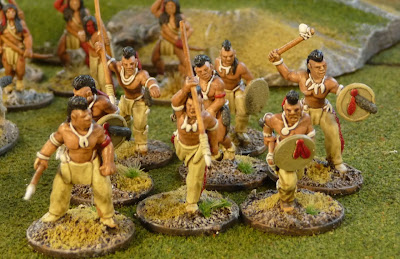 The last unit I completed was Skraeling Warriors. I call this the red band! I just could not get into the warpaint. 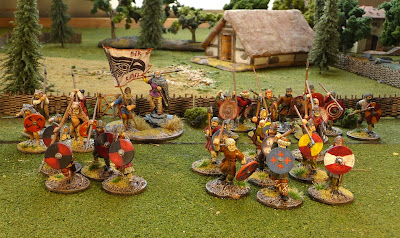 And finally all 8 points, time to play a game I suppose.

So where am I going to go with SAGA, well hopefully some games in the next couple of weeks. I am interested in painting up either a Norman or Breton War Band as well, I will also add to the Viking War Band with a unit of levy and another unit of Hearthguard. I believe at the moment that I am unlikely to add any more Skraelings.

Recently there has been much on the go with Dark Ages wargaming with the release of the 2 Dux's. Both games appear to have got excellent reviews and I believe I can morph the Viking figures into suitable Saxons to take on the Romano-Britians in Dux Britanniarum from Too Fat Lardies. I recieved these rules a couple of weeks ago and the campaign system looks really neat. Have to slow down though as I have just made a major Napoleonic purchase about which I am quite excited. More to come.