Last Friday, I had a quick trip to Portland, ME for the annual convention put on by the The Maine Historical Wargamers Association. I could only go for a half day as I have been recently working around the clock. This was the first convention in 3 years so it was extended by a day with 3 days of wargaming rather then the usual two.
I actually had signed up for 2 games, one Friday morning and one in the afternoon. The afternoon game was cancelled, I would have liked to have played it as it was a WWII version of Epic. But the highlight, of course ,was going to be Dick Bryant's CoC game. I have played three times in Dick's games in the past and they are always characterised by excellent terrain and scenarios. This game was the best he has put on.
The scenario "Just Another Bridge" pitted a German Rifle Platoon against an Elite American Paratrooper Platoon. It was not immediately obvious that although the Americans were the attackers, the German defenders had to go on the attack to win the game. We had 4 players, 3 novice and myself, whom Dick had characterised by epitaph "Expert". I was one of the Germans and as it came to pass Expert does not mean Good!
I will not go into the game itself but Dick and his friend Richard put on an excellent game and my 3 fellow players were all great and picked up on the game quite quickly. So quickly, in fact that the novices easily won the game. Here are some photos. 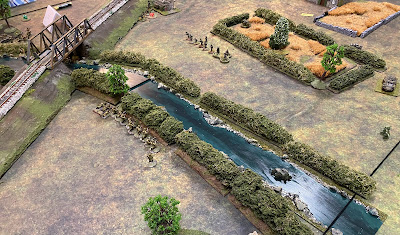 Thanks to Bill and Jon who played the Americans and David who played with me for the Germans.
Posted by john de terre neuve at 07:22