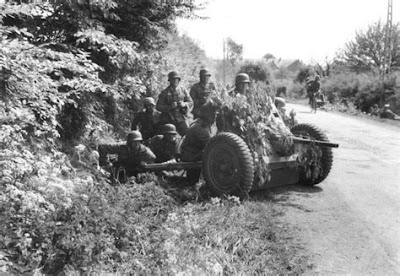 This was the Germans 3rd attempt to take this table and the 8th turn in the campaign. To win the campaign, I have to win this table and the next 2 tables without any more loses. To win a narrow victory I have to get to win table 5. Another loss on this table was going to end up in a draw. Thus this turn was a must win for me. My biggest decision was whether to take my third platoon or not, as Platoon 2 was down a full squad. The French have been doing well with their platoon 2, which had been down a squad since the first game on table 4. I decided to take my last platoon, but I really had to be cautious with them as they had to be used in 3 games. This was going to be tough. Platoons and known supports are below.
Dice were rolled and the game started:
Germans (FM 8 (-1) (3 Schützen Regiment)
Schützen Platoon #3
Supports (14)
Jean-Claude
Red Dice
Off Table MMG
IG18
Stuka
French (FM 11 (+1) (110e Régiment d'Infanterie)
Infanterie Platoon #2 (less 10 men)
Canon de 75 m1897
Supports (5)
Entrenchment
MMG
As usual we played out the Patrol Phase on P-Y's ap. The smaller dots are the JOP's, while the numbered dots are the PM's at their final positions. The game was based on the Attack and Defend scenario from the CoC rulebook. I had 1 free move so this did little to help my rapid advance but I decided to focus on the northern part of the table. I had lost too many men in the wheat field to make it attractive. 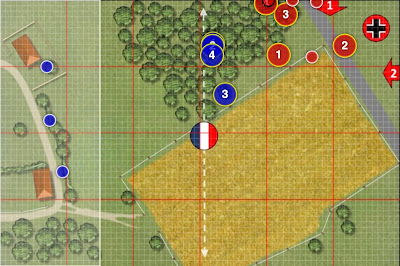 The Action
My Stuka attack got me off to a good start, I missed the building but I got 12 shock initially on the first French squad to deploy and 9 shock on the 2nd. Unfortunately, despite opening up with my OT MMG, I was unable to to pin them, P-Y was able to get his SL's on the table and was rapidly able to remove shock. I wanted to hold off deploying my IG until I knew where he was going to place his 75mm Heavy Gun. As it turned out P-Y ended the turn with three 6's pretty quickly.
My plan was to target the weak spots on the French line with the OT MMG and Jean-Claude while advancing at least 2 squads in the northern woods while deploying my IG, Mortar team to support the OT MMG and Mortars, as they would be best to reduce cover. Timing her was everything and although I stuck to my general plan I believe my timing was off with the IG placement (my position was good as only the southern part of the French force could target it). I was slow in placing supporting teams though and it cost me. I was never able to take advantage of the initial shock that was placed on the 2 French squads and P-Y was able to recover them.
I was able to cause some morale losses with the constant fire from the OT MMG and my 3rd infantry squad which I placed on the southern margin of the woods. Although I was taking some morale hits myself I was able to move my IG out of LOS as well as the supporting 3rd infantry squad before I was destroyed. I did lose a SL as well as my Mortar team in the process.
The French Morale was now 4 while the German morale was 5, 6 command dice versus 4. P-Y, despite only having 4 dice was able to remove almost all his accumulated shock and move his southern line off the hedge so out of LOS. I had moved all my units out LOS. I then advanced 3 squads to the west, just staying out of LOS. My OT MMG continued to fire at the French squad behind the stone wall. I felt that I was now in a good position to win the game, I just had to be patient and wait for a double phase and advance all 3 squads in a firing position (54d6) and with the IG gun (6d6) rain terror down on the French squad with a SL in the north with a high likelihood of a complete morale failure........the French withdrew! On to table 5.
Butcher's Bill
Germans (platoon 3)
Final FM 5
5 dead, reduced to 4 by FM (1 man missing, 1 man dead in next game)
CO +1
MO +1
Cautious (-1 FM)
French (platoon 2)
Final FM 4
7 dead but last game for Platoon 2
CO +3 (+1 support)
MO -2
Secure
Posted by john de terre neuve at 11:26