I enjoyed painting these Vikings. I believe, the last Berserker figures I had seen were some Saruman Orcs from Lord of the Rings that my son had painted some years ago. Really not that much different. Crazed animal type creatures.

In SAGA, these are a Hearthguard unit. You can use only 1 unit of Beserkers in a Viking warband, because they are so crazy I suppose. Generally Viking Hearthguard generate 2 attack dice in melee per figure, but these guys have 4 each. Very crazed indeed, but it comes with a cost as their armour is reduced from 5 to 3. The bear skins apparently do not provide much protection. This is point 2 in my 4 point starter Warband. 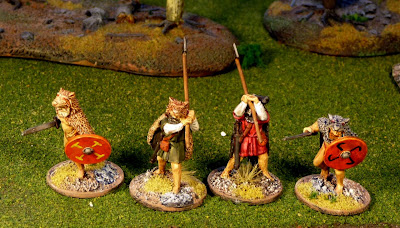 I left the axe handles at the full length, probably wrong but I liked how they looked. I sort of like to think of them like a whirling dervish with axe at full extension. Too bad they do not model that figure.

Also it would have been cool if there was a figure with 2 axes.

I should have some more SAGA in a couple of days, but I have also started a new Napoleonic unit, just to take a break.