Here is my second point of Skraelings, a unit of warriors, these are the hand to hand guys. You can see that unlike the levy, they have Mohawk hair styles, a little unlikely for these guys in 1000 AD, but I will get into that bit more in my next Skraeling post. Other then that they are probably right for the period. Their clothing is all made of caribou skin and their weapons are stone.

There will be 3 units of these guys in total in my Skraeling 4 pt warband, there are no hearthguard equivalent in the Skraeling SAGA world.

Again, primed white, block painted and AP applied with minimal highlights. I quite like how they came out. I should also note that unlike the levy, I believe these figures are all different. 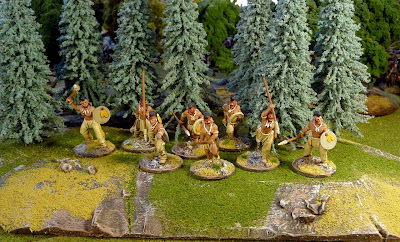 I use GW Elf Flesh for european skin, here I used GW Tallarn Flesh. Worked well I believe. Aboriginals in Newfoundland at this time had no access to cloth. Their clothing was purely comprised of animal skin, mostly caribou. I felt that GW Bleached Bone was a great colour here. Otherwise implements were crafted out of birchbark, bone and stone. They probably would have used sea shells for decoration. The skins would be probably beaver, but could be the Newfoundland Wolf tails since long extinct. 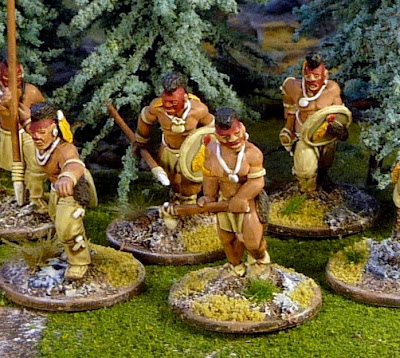 I plan for each unit in the warband to have a unifying colour, the sharp eyed of you may have noticed that all the arrow feathers in the Levy were sky-blue. Here I picked yellow. Not many dyes available in Newfoundland. But there are buttercup and dandelion flowers which are an intense yellow, so I had these aboriginals stain their feathers and some of their caribou skin yellow. The shields are wood covered with birchbark, probable the colour is wrong but it is a good contrast to the caribou. 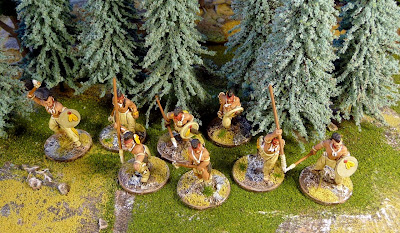 The cognoscenti among you will know that the term red indian actually originated with the European visitors in the 15th and 16th century when they first encountered the Beothuk Indians in Newfoundland. The Beothuks decorated themselves with red ochre. I do not really have the colour right here as it should be more orange. But I decided to make it a little brighter and redder in order to make things stand out.

I hope you have noticed that I have not directly linked the term Skraeling with the Beothuk tribe, I will get more into that in my next Skraeling post. Stay tuned.