I have run 14 turns and so far things are going quite well. The only real problem is that the time element is way off. Generally each turn is supposed to represent 15 minutes of real time, after 7 turns though the 2e légère is just approaching the wall. This is ok, but the reinforcements are arriving too early. I suspect the increased ground scale is throwing off the movement scale.
Here we see GdB Baudin giving orders to chef de bataillon Le Vol (2/2e légère). Colonel  Maigrot can be seen to the right exhorting the 1/2 légère to enter the wood. 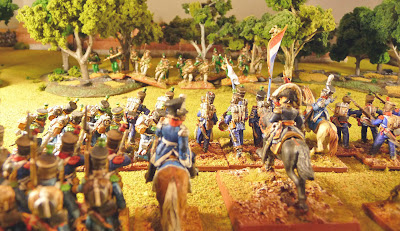 The French advance toward Hougoumont through the wood. The Hanoverians in the wood start to pick off the advancing french skirmishers. There irregular status and their SK advantage work to their benefit and the 1/2e légère suffer the first casualties. The voltiguers have to retreat. The 2,3,4/2e légère advance and the Hanoverians withdraw. The light companies of the Guards advance to cover their retreat. 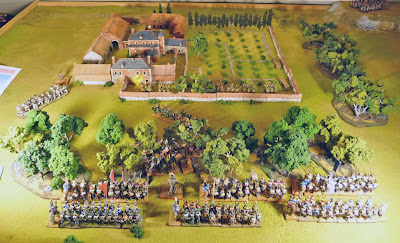 Turn 4 has already arrived and we see Soye's brigade advancing from the south west in attack column. The 2e légère are almost through the wood (it is a little hard to see, but if you doubleclick on the photo, you will see that I detach the mounted officer from each battalion and use this as a marker to record the battalions advance through the wood) 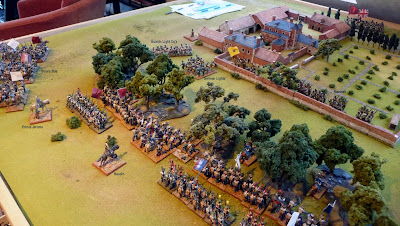 Soye's Brigade advance, it looks like the Guards light companies and the the Hanoverians may get caught. The Hanoverians turn and attempt to cover the retreat of the the British. Lord Saltoun watch as his irregular troops attempt to extract themselves from the the French advance.

The 1,3/1e ligne form line and fire into both the British and Hanoverians. The British maneuver into line and start to retreat around the south west corner. It looks like the Hanoverians may be caught! The 2,3,4/2e légère advance into the killing ground. The Nassauers fire a volley but cause no casualties.

The 2/Coldstreamers form a line to protect the retreat of their light companies and hopefully the Hanoverians. Positions at the end of turn 7. 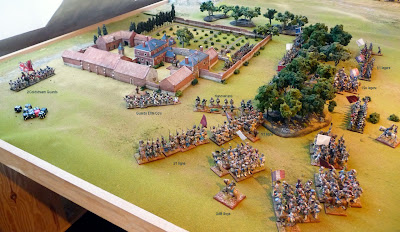 Well fun so far, I will continue to run the scenario as planned, but some problems have been identified. I probably need to change the turn entry of the reinforcements. I am also going to have to reconsider what units can enter the ZOC. As noted in the introduction, I felt only a brigade could attack the complex at one time. I envisioned this to be units from only 1 brigade at a time. As you can see the forward elements of both Baudin's and Soye's brigades reached the ZOC at the same time. I had to hold back the lead battalions under Soye. Maybe, I should have made it that 6 battalions from any brigade can attack at one time. Of course if I changed the turn entry of Soye's brigade this may of not been a problem. Any comments?
Well time to celebrate Xmas and start cooking, I have to figure out how to cook duck and make a trifle. Hope to have another report for Boxing Day. Happy Xmas to all.
(31,065)
Posted by john de terre neuve at 11:04