There was a short discussion about La Haye Sainte on TMP a couple of days ago, this reminded me that I bought the Airfix 1:72 scale farmhouse for La Haye Sainte several months ago. Initially when opening the box, I was not too impressed as it seemed quite small and flimsy. But after the discussion, I thought maybe I should take another look.
Most of us know it to be impossible to model buildings to scale in 28mm wargaming. The building would be gigantic and would easily take up most of our terrains. Clearly for 28mm wargaming, buildings have to have a small footprint and an exaggerated vertical scale. I use Field of Battle rules and the ground scale is 1" to 25 yds. In respect to these rules, a town section is 6x6" and 1 battalion of infantry is allowed in each town square. I generally try to adhere to this and knowing that during the Battle of Waterloo, La Haye Sainte was garrisoned by a single battalion of KGL infantry I was faced with a challenge. Scale in wargaming is all about fudging the numbers, so I felt it was not unreasonable to have a go. I set up the Airfix model and found that I could fit it with some adjustment on a 13x9" terrain piece. This was not too bad as the buildings on their own take up about 60% of the square footage. I can accept that.
The building was easy to assemble, I modified the wall to right of the building by shortening by about 3" it so it would fit the base. I primed it white and painted it with GW washes and a GW foundation paint for the roof. The plastic wall have a brick pattern imprinted on them, and as you can see from this photo the wall were actually stuccoed, so I took some dry wall compound and stuccoed the walls. The result is below. I believe it came out OK, although it would be nice if the vertical scale was exaggerated. Of note, Total Battle Miniatures is planning to come out with a range of buildings that indeed reduce the footprint but preserve the height. 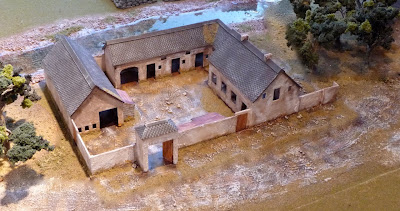 Now all I need is a scenario to wargame this aspect of the Battle of Waterloo. Maybe I will base it on this excellent resource.
(10147)
Posted by john de terre neuve at 09:35