The 25e légère is the second light infantry regiment in the French Army of Portugal's 6th Corps, the first being the 6e. For this unit, I decided to go with Foundry figures. I had not painted Foundry figures as a unit for a couple of years, a regiment deal came up, so I bought some. The figures themselves are very nice, well detailed with only some flash. I like the march pose, and they go together as a unit nicely. I would have no reluctance to buy them again. Foundry figures are certainly a little shorter than Front Rank, Victrix and Perry, but are fine in the same army, I would definitely avoid putting them on the same base and probably the same unit.
This is a biggest unit in the Fuentes OB, numbering 1870 all ranks on the field those 3 days in May 1811. I added a couple of extra stands to my usual 12 for a French 3 battalion regiment, making 14 stands in total.
So that was all good, but I did run into some problems. Like I said, I bought a regiment deal, and they all came in one box, loosely packed unlike their usual blister. Easily 1/3 of the bayonets were broken off and at least half the long plumes were broken off the elites. The bayonets did not bother me too much, but the plumes were difficult to glue back on and although you can not see it in the photos there are some lumps of glue on top of the shakos.
Second problem was the priming stage, I completely screwed this up. I usually use an automotive white primer that goes on very thin, but at the same time covers well. This time without realizing it I use Rustoleum white primer, which went on thick, like great lumps of s...! I then made a really stupid mistake and tried to rinse it off with water, what I ended up with was these scrofulous looking blisters on one stick of figures. What a nightmare, but I soldiered on. I used my usually thin wash technique with a brighter blue than the ligne. And I think the figures as a group ended up looking ok. 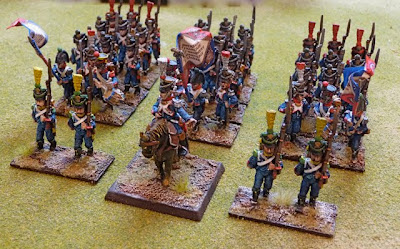 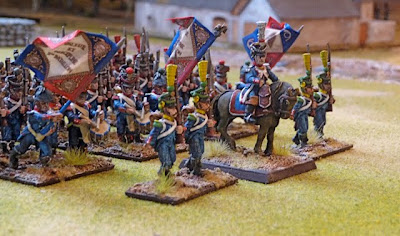 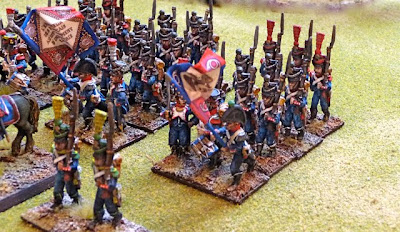 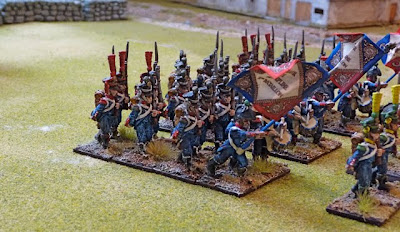 Well that completes the 2nd division in the 6th corps, I will post some photos soon of the complete division. I am also finishing the 1st division with only 30 more figures left to go. Hard to believe, I have my first full corps almost done.
(10301)
Posted by john de terre neuve at 12:17